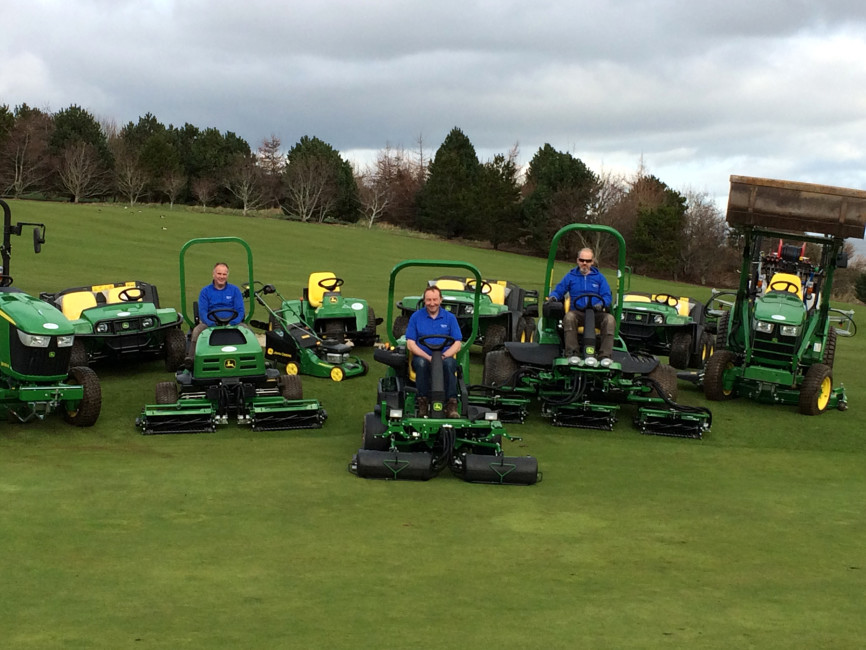 This exclusive luxury mobile home park was established in 1957 and is situated in rolling parkland on a stunning headland overlooking Brittas Bay. Resort members have free use of Potters Point Golf Club; established in 1987, the nine-hole parkland course is also open to green fee paying non-members. Both the resort and the course were developed by Malachy McDaniel Stone.

"We bought our first John Deere machines in 1997," says manager Irene Lacey. "John Deere machines last for ages - we'd had nothing new since 2008, so the fleet was getting old. This time, rather than replace the machines individually and pay for ongoing repairs, we decided to change all the equipment at the same time. The benefits were a better trade-in price and all the new machines being up-to-date and equipped with the latest technology."

The new fleet includes three PrecisionCut cylinder mowers - an 8700A for the fairways, a 2653B for tees and surrounds and a 2500B for the greens - a JX90 walk-behind rotary mower, a 1200A bunker rake, two 3038R compact tractors equipped with mid-mounted rotary mower decks plus one front loader, and three 6x4 diesel Gator utility vehicles.

"We opted to replace two quad bikes with an extra utility vehicle, as the Gator is far more versatile," says Irene. "In addition to the cargo bed, it can pull a trailer and carry two staff. The Gators are used as general purpose materials and staff transporters, and for jobs such as emptying the bins on the course. They're four-wheel drive and fitted with heavy-duty all-purpose tyres, as it can be wet at times. The 3038R compacts are also used to mow the grass areas in the mobile home park."

Whereas other makes have been demonstrated and test-driven in the past, this time Potters Point went straight to its long-time supplier, John Deere dealer Dublin Grass Machinery. "I have been on a number of John Deere courses, so I know the equipment better than other makes," says head greenkeeper Eamonn Delaney. "We've dealt with Dublin Grass Machinery for the past 20 years and know that they provide a high level of after-sales service.

"I also have a good working relationship with their chief technician Roger Ingles. We carry out regular maintenance on-site, while Dublin Grass Machinery takes the machines in for winter servicing and blade changing, and provides a 24 hour turnaround. As the equipment is serviced regularly, we've very little downtime and it means the staff are not having to sort out machines when we could be doing something else around the resort.

"As far as the latest technology is concerned, compared to our older fleet, the quick-release system on the compact tractors' mid-mounted deck is a fantastic piece of engineering. Setting up features such as the single-point height of cut adjustment on the mowers are a massive improvement too - they're much easier and save a huge amount of time," Eamonn adds.

"Engine noise has also been reduced considerably on all the machines and there are a lot more safety devices - the health and safety aspect has improved greatly."