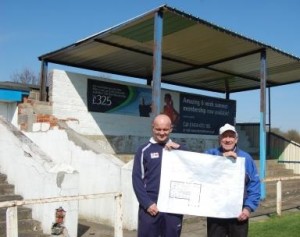 Ambitious plans to restore an ailing Victorian community football club to its former glory have been unveiled.

Annfield Plain AFC, near Stanley, was founded in 1890, two years before Newcastle United, and the original ground was built by miners on a site nearby its current home at Derwent Park.

The club once attracted over 3,000 supporters to games, but, now languishing in the lower mid table of the Wearside League, it is lucky to have 50 fans on match day.

Volunteer manager Keith Sheardown has his sights set on competing in the FA Cup and FA Vase, but has said the current facilities, which were created shortly after the Second World War, are "woefully inadequate".

The club wants to raise £400,000 to renovate the ground to create a community sports facility fit for the 21st century.

Mr Sheardown, 35, said: "It would be fantastic for the community and we could get them involved.

"I would like to attract the young players here so we can get our youth teams up and running again. It will give the area bit of a buzz back."

The plan includes creating a new pavillion, a clubhouse with a bar for functions, modern changing facilities, new fencing and floodlights as well as a training pitch.

If the club hits its target, the transformation will be dramatic as currently the fence is rusted and has been torn down, the stand is old and tired, the brickwork around the players' tunnel is delapitated and there is no heating.

The club has also been blighted by vandalism and over 20 burglaries in the last five years, which have cost thousands of pounds in damage and stolen training equipment.

Mr Sheardown said the cash-strapped club would have folded if it were not for the support of a dedicated team of volunteers who maintain the grounds.

See the rest of the article on the following link :- The Northern Echo