by Football Foundation
in Football and Synthetics
on 24 May 2018 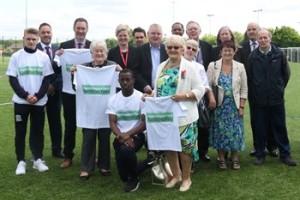 Their facilities were made possible thanks to investment from the Premier League & the FA Facilities Fund, which is delivered by the Football Foundation. The grant enabled CTC Kingshurst Academy to install the brand new third generation (3G) artificial grass pitch (AGP) and changing pavilion, helping to improve the provision for grassroots football in the local area.

The facilities support the delivery of numerous sessions, including FA coaching courses and the school's Post-16 Football Academy. In addition, Birmingham City FC run development centre sessions on the new 3G surface during the week, as well as football camps during school holidays. These sessions supplement high quality coaching with visits from professional players, to inspire and encourage those taking part.

The pavilion provides changing facilities for four teams, as well as including two officials' rooms, a multi-function room and accessible spectator toilets. The Academy and other users, such as partner club Arden Forest FC, Marston Green FC, Kingshurst Sporting Club FC and Solihull Sporting Girls and Ladies FC, are all able to take advantage of the new changing provision.

Users also have access to the state-of-the-art, floodlit all-weather playing surface, in addition to the site's existing grass pitches. This acts as the venue for Arden Forest FC's home fixtures and training and will enable them to expand its girls' football provision. It also provides an excellent learning environment for the Academy's students, who are encouraged to take advantage of opportunities within the local game.

CTC Kingshurst Academy were awarded a £492,000 grant from the Premier League & The FA Facilities Fund towards the project. Solihull Regen also contributed £100,000 to the development of the sports hub. CTC Kingshurst Academy worked alongside the Football Foundation and the Birmingham FA to compile a five-year Football Development Plan, which is a vision of how sport will be played on site with an emphasis on increasing participation.

Partner club Arden Forest FC, for whom the sports hub is a home base, expect to introduce 11 brand new sides thanks to the facilities available. This will take their total number of teams from 13 to 24, and will support a 512% rise in overall football participation on-site. This is in addition to participation increases resulting from the delivery of FA initiatives on-site, including Team Sixteen and Team Nineteen as well as Football Mash Up.

The Post-16 Football Academy is also helping to boost participation. The programme will support 90 students in developing as players, through providing daily coaching run by Solihull Moors FC members - including midfielder Darren Carter. The Football Academy will help its young members gain new qualifications and make the most of what the game has to offer.

Arden Forest FC will also run new girls' taster sessions for local schools, and plans to introduce new female sides. Along with the FA Skills on-site delivery, which aims to create new female teams as well, this will help to increase women and girls' football participation on-site by 644%.