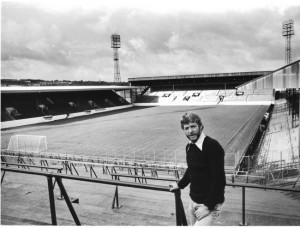 Spend some time with former Burnley groundsman Roy Oldfield and the stories come at you like the sprinklers that keep the Turf Moor pitch slick.

Once the tap has been turned on it's an endless stream of wonderful recollections from Oldfield's time at the club in the 1970s and 80s. From the characters that frequented his room at the ground, to working for Bob Lord, via getting a game postponed to ease an injury crisis and searching the stands for a bomb hours before the crucial Orient game in 1987.

Renowned Burnley author Dave Thomas' latest book on the clarets is Oldfield's story and he can't have been short of material for Mud, Sweat and Shears, which is published in June.

Oldfield's memory is fantastic and his stories fascinating, an insight into how the game has changed in the decades since he walked out of the groundsman's room at Turf Moor for the final time.

There are awards for groundsmen now and it's a competitive industry, but Oldfield's ascension to the job at First Division Burnley couldn't have been more relaxed.

"I worked at Scott Park. At the time Jimmy Adamson lived overlooking the park and he used to come round every morning walking his Scottie dog and he'd talk to the lads in the park and we'd pull his leg about the game on Saturday and what have you," Oldfield begins.

"Out of the blue one morning he said, 'Could you come down to my house after work?'. I went down and he said, 'I've no job for you here but how would you fancy coming down to Turf Moor as groundsman?'.

"I was surprised. I'd never done any groundsman work. But the groundsman was retiring in 12 months time and he said he could show me all I needed to know."

Oldfield starts with stories of giving Chelsea director Seb Coe a tour of the ground and earning an extra £15 from Granada for doing a TV interview on the state of the pitch, before he moves on to some of the era's biggest names visiting Turf Moor.

If you would like to read the rest of the article from the Lancashire Telegraph please visit HERE.