1 From Dell Boy to Saint 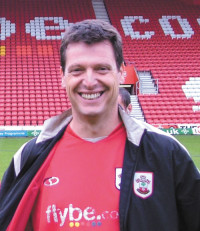 We have a problem with drainage on the pitch at St Mary's, Southampton. The pitch is built over a gravel raft/carpet with drains laid every 3m below this. Above the gravel is a grit layer 50mm deep with a 200mm of rootzone laid over this.

The rootzone is 95% sand 2% silt, 3% clay and is laid totally flat i.e. no crown. Over the past few years this construction has given us problems with drainage especially with very heavy or prolonged rain during the non-growing winter period.

The largest problem that we face is the perched water table ends up holding water very close to the surface. Great in the summer for establishing the grass as the surface remains moist and great for match days as the high perched water table keeps the surface soft but stable, however for the rest of the year this gives me problems in maintaining a high class surface that drains freely.

The high water table gives us several specific problems that all add to the poor drainage rates of our pitch:

These are expensive options, some of which are just sticking plasters and don't sort out the deep-seated problems. We, as a club, are trying to find a long-term solution. However, this has to be funded and any serious remedial work needs to fit in around summer events. 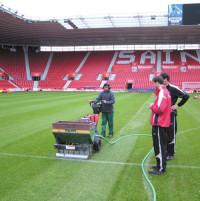 Our work routine on the pitch is all based around the management of the high water content and the reduction of the black layer. Each recent end of season renovation is about increasing the rootzone depth. This is done using heavy sand dressings and sand injection. This year we managed to increase the depth of rootzone by 20mm without any real reconstruction of the top.

We use aeration to the absolute maximum without compromising the stability of the pitch. We will use deep vertidrain type aerators in large gaps between fixtures and use shallower punch action aerators on a weekly basis, and maybe carrying out sarrel rolling as well during the week, sometimes on a daily basis.

As much as I would like to, it is difficult to keep adding sand to the surface during the season as the incorporation of sand is damaging to the grass, and sand on the grass is not acceptable to many football players and managers. We have, in the past, particularly in quiet periods, added small amounts of kiln dried sand but that is about the limit. Maybe all of that is about to change.

I saw the DryJect machines on the web about four years ago and thought then that these machines could play a great role in my 'in season' maintenance, however they where not available in the UK. I saw the advert for DryJect on the Pitchcare website and phoned the company to find out costs and if I could see a demo of the machines anywhere.

Subsequently, I went out to Queenwood Golf Club in Surrey to watch the machines in operation with Andy and Ricky, my staff who work with me at the stadium. We were all very impressed with the machines and the operation, in fact the greens were back in play virtually immediately after DryJecting.

I booked the machines in as soon as I saw my season fixture list and, just to be safe, made sure we had a gap to put right any possible damage that may occur to the surface.

I had nothing to fear though, one machine and operator arrived on the 4th October and after two long days we had injected nearly 16 tonnes of Mansfield MM45 sand into the pitch. The sand was reaching depths of over 100mm, with very little spill on the surface and no disruption to the playing surface whatsoever.

After the work had been completed the weather gave me a great test when, on the 6th of October, the heavens opened with non stop heavy rain. The pitch coped well with this torrent where, historically, it would have started to puddle. So far so good.

I am hoping that by doing the DryJect at the start of October the benefits will last right into the winter, taking us through the wettest months of the year and beyond.

As already stated the problems at St Mary's are many. The surface problems are the ones we can now manage, by creating a hole and then filling it with sand allowing the water to pass through the algae, organic material and black layer into clean rootzone.