0 From Fields to Fairways

From Fields to Fairways in Record Time

Members of Brookfield golf course, near Audlem, Cheshire are enjoying a second summer of golf this year, on the site of a former dairy farm. Constructed during 2001, with the tees and greens sown with Top Green seed mixtures in October that year, the greenkeeping staff worked flat out to get the 18 hole course ready to open, less than a year later, in June 2002.

"There were long waiting lists at all the local clubs, and a pool of players nearby, eager to find somewhere to join," says Club Professional Rob Ashbrooke. "Membership is almost full now, and all the golfers seem very pleased with how well the course is playing, despite it being so new." 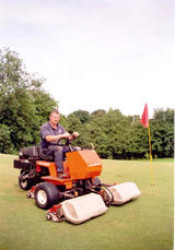 "It's been pretty tough going," Pete admits. "We have done most of the work in-house and by hand, with contractors only coming in to sow the fairways. We have a constant battle with weeds such as docks, nettles, thistles and clover, which are common on farmland.

"The ground is very compacted in places, where the heavy machinery travelled during construction. With the irrigation system only just coming on stream, we have had to hand water the greens in dry spells up to now. And last summer I mowed all the greens by hand - a total of 42 miles walking each time!"

Ten tonnes of amenity grass mixtures from the Top Green Euro range were originally sown across the 6128 yard course - with Euro 4 on the greens, Euro 1 on the tees and fairways, and Euro 17 used at the entrance and around the clubhouse. The seed was supplied by Countess Seeds, based in Winsford.

"The grass has done incredibly well considering the time it has been down, and the amount of wear it has had in its first year," Pete says. "With a heavy schedule of games played over the weekend, and visiting societies playing in the week, the course is rarely quiet."

The greens were built to a USGA specification, with sand over soil, and are very free-draining. Pete will be starting a regular 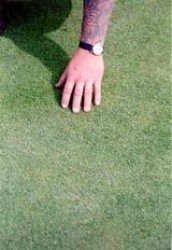 The greens are cut down to 6mm five to six times a week during the summer, and the tees are cut twice a week. Divots on the tees and fairways are over seeded with Euro 1, and the seeds germinate quickly to cover up the damage.

"We have put these Top Green mixtures to a really hard test, and they have not disappointed," says Pete. "They have produced very good playing surfaces in record time, under very tough conditions. They have definitely proved their worth on this course already.

"We also appreciate the support Countess Seeds have given us over the past two years. Their golf specialist Bill Dearden visits us regularly to see how the grass is performing, and to give advice and encouragement throughout the season."