0 From here to there 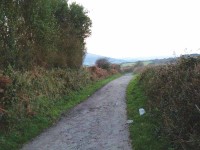 The STRI's Soil Chemist, David Lawson, charts the path of paths and how current legislation might affect sports facilities.

From earliest times, man has created paths and pathways in the landscape. In the collection of water, food and other materials, man wore away areas through the local vegetation around their home in order to access life's necessities. Normally, such paths would take the shortest route between the two points but, at the same, time avoiding any physical obstacles. In most parts of the world such naturally formed paths have been in use for thousands of years.

It is amusing to contrast this with the modern urban landscape, where pedestrian tarmac paths are planned and set out within landscaped grass around shopping precincts and supermarkets. Nevertheless, pedestrians will often find a shortcut across the grass and literally 'beat out a path' for others to follow.
It is also the case that many of our modern roads started as paths or tracks in grass or through woodland between adjacent hamlets or villages.

Use of some paths may change over time, for instance many of the old drove roads used for transporting livestock to market are not now so intensively used. However, they have left their imprint on the landscape and can be spotted from aerial or satellite photography. In some cases, they have been rediscovered and are now used as leisure trails and bridleways.

It is still the case today that most paths and bridleways consist of a worn length of soil compacted by trampling feet. In some situations, loose stone may have been spread to provide a firmer surface. At a more highly engineered level, a base was excavated and flat stones placed as surfacing material, as found with old Roman roads. Today, the more modern path is formed with construction gravel on a prepared base, or tarmac may be employed on intensively used paths, particularly where cyclists use them.

Whatever the history or type of path, land ownership inevitably results in the Law being involved to clarify the rights (or otherwise) of access. In 1826, the Manchester Society for the Preservation of Ancient Footpaths successfully fought a legal battle against a landowner who had tried to close paths on his land at Flixton near Manchester. This led to the founding of similar groups throughout England as well as the Scottish Rights of Way and Recreation Society.

Highways Authorities hold definitive maps on existing rights of way and they are marked on Ordnance Survey maps for England and Wales.
There are three principal categories of right of way: footpath open to walkers only; bridleway open to cyclists, horse riders and wa 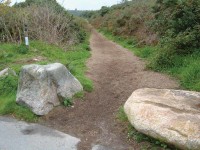 lkers; and byways open to all traffic such as cyclists, riders, motor vehicles and walkers.

It is often thought that rights of way do not exist in Scotland, but this is not the case, even though they are not marked on Ordnance Survey maps. There is a National Catalogue of Rights of Way maintained by the Scottish Rights of Way and Access Society (Scotways) which divides their status into 'vindicated', by legal process; 'asserted', which is accepted as rights of way by a landowner; and 'claimed', where they appear to meet common-law conditions but have not been formally vindicated or asserted.

Northern Ireland does not have a developed network of public rights of way and, indeed, does not have a tradition of public access to land. However, under the Access to the Countryside (Northern Ireland) Order 1983, the prime responsibility for securing countryside access rests with the district councils.
In general, the local authority is responsible for ensuring that statutory rights of way are open and usable. They are also responsible for maintaining the path surface. However, the responsibility for common-law rights of way is not so prescriptive.

Over the past few years, local authorities in Britain have been required to survey their path networks with the aim of improving them where necessary and extending them with new pathways. In England and Wales, this has been carried out under ROWIP (Rights of Way Improvement Plans), in Scotland under the Core Path plan strategy. However, the underpinning legislation does not require the authorities to carry out the actual improvements.

At the moment, legislation is also being established to open up and improve public access to the British coast.

When and where path network improvements do occur they may impinge on leisure, recreation and sports facilities and can have repercussions for players. This has been the case on a number of Scottish golf courses. Although the Right to Roam legislation in England and Wales (Countryside & Rights of Way Act 2000) has, in theory, opened up large areas of land that previously had restricted access, it is still not the case that access is open and, indeed, many rights of way can be very difficult or even impossible to walk on.

Such obstructions to passage evoke much emotion in the user and landowner, and legal battles over accessibility can rumble on for many years. The Ramblers Association is particularly active in ensuring that rights of way remain open and are fit for purpose.