0 From Pink to green at the Ricoh Arena

Would you be confident playing a pre-season friendly on a pitch which was, in parts, seeded from scratch just 37 days previously? Coventry City Football Club's Head Groundsman, John Ledwidge, encountered that very scenario last summer. His pitch has weathered one of the harshest winters in a century and he credits his grass seed choice for pulling him through.

When John Ledwidge began renovating the pitch at the Ricoh Arena last spring, he was under no illusion that a challenging summer lay ahead.

Having re-joined the club as Head Groundsman in October 2009, he relished the opportunity to make his mark on the Championship side's pitch and was prepared for the challenge of producing and maintaining a healthy, durable and visually appealing stadium surface for the forthcoming season. 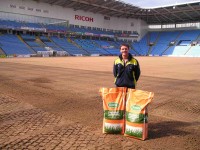 The pitch underwent major renovations at the close of the season to expose the XtraGrass surface which was installed when the stadium was built in 2005. It hadn't been exposed since and was buried in the rootzone, preventing the grass plants' roots from penetrating and taking hold.

Premier Pitches stripped some 300 tonnes of material off the surface with the Koro TopMaker before stone raking and Desso raking to stand the fibres up, then replacing the material he had removed with 50 tonnes of sterile 80/20 top dressing. With American pop/rock singer Pink due to perform at the stadium on 24th June as part of her Funhouse Summer Carnival Tour, time was of the essence in getting the grass established before crews moved in to cover the pitch.

John's choice of grass seed, although a departure from the norm, was in his opinion, far from risky.

"I did my homework and chose Scotts' ProSelect 1 Perennial Ryegrass mixture. I use Scotts' fertilizers and plant protection products and have total confidence in them. I'd seen the trial plots at Levington Research Station and at Aston Villa's training ground and for me it really was a case of 'seeing is believing', the colour is exceptional."

Rapid establishment when time is limited 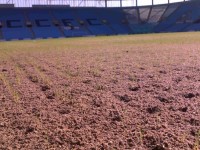 After renovating around the clock for four full days and nights, the pitch was seeded with 20 bags of ProSelect 1 on 13th May, and progress was rapid, as John explains.

"The seed chitted in six days and we carried out our first cut after 13, before feeding with Sierraform GT 18-22-5. We applied Primo Maxx plant growth regulator at the second leaf stage when the plant was 20 days old at a rate of 0.4 litres tank mixed with 40 litres of Greenmaster Liquid 10-0-10. Greenmaster Blade was also added to aid microbial activity. An application of Greenmaster Pro-Lite 12-0-12 granular fertilizer was then carried out four days later."

"The pitch was stable enough for us to vertidrain for the first time on 10th June. By this time the roots had firmly established themselves around the XtraGrass fibres that we had worked so hard to expose in the summer. With the concert coming up, we used an 80/20 top dressing rather than sand to try and hold on to the nutrients a bit longer"

Preparing the pitch to be covered began in earnest a week before. After mowing, Heritage fungicide was applied. A selective weedkiller was also sprayed, followed by an additional cut and a further tank mix of Primo Maxx and Greenmaster Liquid 10-0-10. Three days before covering, the pitch was cut once more and Daconil WeatherStik applied.


"The surface was covered by Terraplas for a week. Once removed, it was litter picked, drag brushed and cut with rotary mowers. There was no yellowing or discoloration whatsoever," John confirms. 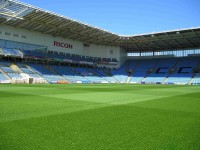 At the south end of the stadium, the staging had been set up directly on top of the top dressing. This was tilthed up and watered down before the area was seeded three times with a disc seeder and twice with a dimple seeder. The area was then treated with Sportsmaster Pre-Seeder 8-12-8 at a rate of 35g/sqm and then fertilized to the existing pitch programme with a tank mix of Greenmaster Liquid 10-0-10 at 40 l/ha and Greenmaster 12-0-12 at 35 g/sqm.

When the home side played West Brom in a pre-season friendly on 31st July, the main pitch was 77 days old and the staging area, 37. By this time, with the aid of a small lighting rig, both areas had married up very well and there was little difference visually or in term of colour, density or the durability of the sward. Up until the second week of December the groundstaff were able to maintain 94% grass cover across the whole pitch, however a run of three weeks of the coldest weather on record, numerous training sessions and four matches really put the pitch to the test. John believes that it's due to the fantastic growth, health, vigour and turgid nature of the plant that he managed to hold on to at least 60-70% cover.

He credits their ability to maintain a stable and playable surface largely to the rootmass developed through the growing period, which he says was one of the key influences of his choice to use ProSelect 1 in the first instance. 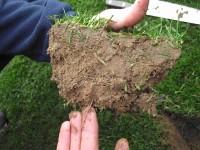 "I've been more than pleased with the results," he confirms. "Following the concert, the CEO of the Ricoh Arena said that he's never seen such a green pitch after covers had been lifted. The rapid establishment and fantastic rooting has given me a stable and aesthetically pleasing surface to work on. Everybody from the players to agronomists have commented on the colour, evenness and turgid nature of the sward and also the broader, waxy texture to the leaf which has improved ball response and the quality of cut."

"Disease resistance has been brilliant and the natural dark green colour has provided us with a fantastic looking pitch, even when nutrient levels are declining or leaf spot has crept in. Recovery and repair is rapid and we have seen divots decrease by at least 50%, saving us time and resources."

"On the training pitches, the sward is standing up to everyday use and keeping the surface stable and durable. Overall, ProSelect 1 is providing me with fantastic surfaces to work on and I think it's one to watch for stadiums and training grounds throughout the country."

Bred for performance with exceptional colour

"As a winter games pitch mixture it ticks all the boxes in terms of the characteristics you'd want in a premium ryegrass blend", explains Mark Rayner, Key Accounts Manager at Scotts. "It rapidly to produce a deep rooting, dense sward with superb wear tolerance. It is shown to repair quickly from divots and is resistant to disease, cold and drought."

"But it is the rich, dark green winter colour that has been catching the eye of turf professionals, particularly those preparing pitches for professional sports clubs," he discloses.

The three ryegrasses in ProSelect 1, Roadrunner, Vantage and Citation Fore, were bred specifically for their visual merit in America by Scotts' breeding partner, Pure-Seed Testing Inc, a pioneer in turfgrass breeding and one of the most productive and respected breeding companies in the world. The trio were all awarded the Scotts Visual Merit icon, which helps end-users identify varieties that have met or surpassed rigid standards when subjected to a programme of intense, trait-specific trials.

ProSelect 1 had been sown in trial plots alongside other leading ryegrass mixtures at Scotts' Levington Research Station near Ipswich. Each plot received identical inputs and maintenance but the colour differential is clear to see, even during the winter months when the grass plant is dormant.

"The plots really are stunning", Mark added. "When you're preparing playing surfaces at major sports venues, aesthetics are important and definition and contrast are all key considerations for match preparation. Turf managers want their pitches to have rich winter colour, achieved without the excessive use of nitrogen or iron and these grasses make that possible."

For more information about ProSelect 1, visit www.scottsprofessional.co.uk and click on 'grass seeds' in the Turf & Amenity section.