0 Full steam ahead at Boat of Garten Golf Club

Located at the gateway to the Highlands, Boat of Garten Golf Club is an enchanting place. Flanking the course to the west is the quaint Strathspey Railway, and the lovingly restored steam trains occasionally puff and pant their way past the course. Lee Williams met with newly appointed Head Greenkeeper Michael Mann to see how he's settling into his new role. 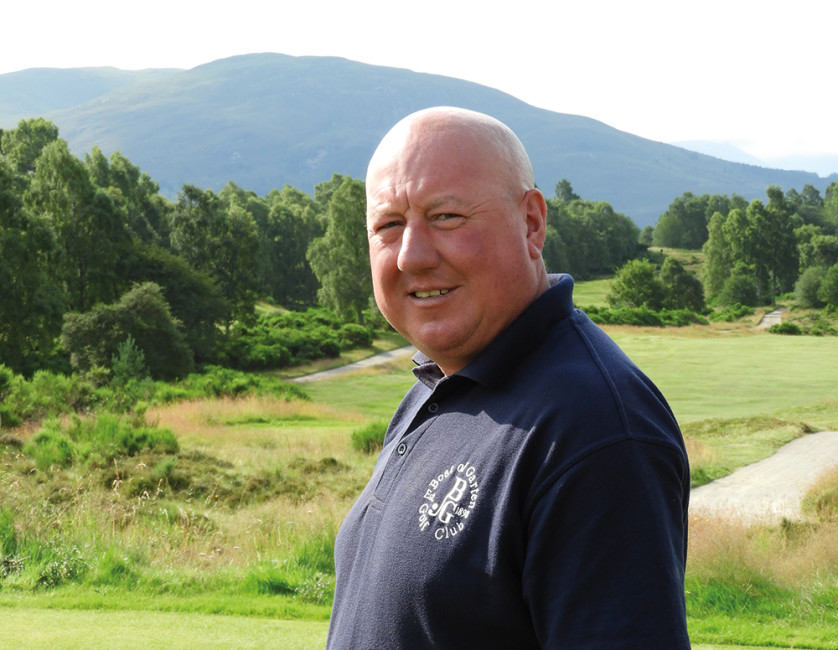 Michael has only been at the club since April 2019, and it has been a somewhat steep learning curve since landing the position. He explains his start in the industry and the path he's taken to be in charge of such a beautiful golf course. "Straight out of school, I got an apprenticeship at Keith Golf Club, where I spent seven years. A job then came up at Carrbridge Golf Course, which is a nine-hole course only six miles from here, where I took over as head greenkeeper looking after the course as a lone worker for most of the year. I spent twenty-two years at Carrbridge before a position opened (in January this year) as first assistant greenkeeper here at the Boat of Garten. The opening changed to a head greenkeeper position, which I was asked to apply for instead, and subsequently started in April. Jordan Shaw moved up to first assistant (who has an NVQ level 2 in sports turf) and we took on two more guys who have also been here since April; John Ingles is assistant greenkeeper and Bruce Grant, a summer casual who is currently at university. It's been a big turnaround of staff for the club but we are slowly getting there. A member of the club looks after the gardens around the clubhouse and we will soon be looking to take on an apprentice greenkeeper. It's been a challenge, but I'm loving getting my teeth into it."

Michael has an NVQ level 2 in sports turf which he took out at Elmwood College and holds his spraying certificates PA1, 2 and 6.

The heathland course sits on a natural gravel layer with varying levels of a sandy topsoil, and this makes the course very free draining. "Flooding on the course is very isolated. It did flood on Wednesday morning after the heavy rain and thunderstorms but, by 10.00am, we were open." 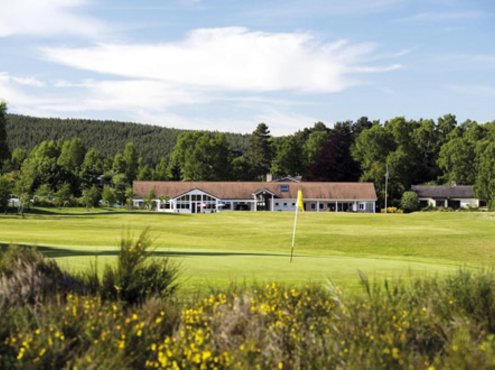 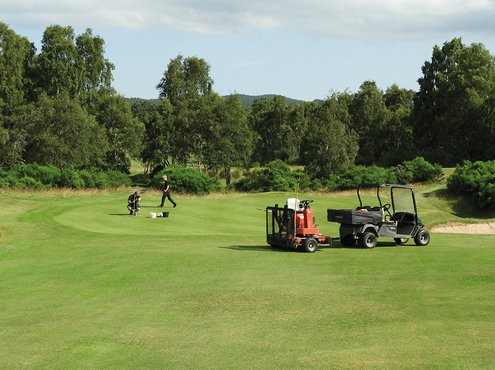 Being at the foot of the Cairngorm mountains, the Boat of Garten sits 220 metres (720 ft) above sea level, which can cause issues with snow in winter. "We had quite a late snowfall this year and, of course, if there is snow coverage this closes the course. Funnily enough, the snow has only just cleared off the top of the mountains in June. We are also quite susceptible to heavy frosts and a lot of low temperatures but, once they lift, the course picks up naturally."

In recent years, three of the greens have been rebuilt to USPGA specifications and the rest are the original James Braid greens, which are predominantly made up of bent grass. Since he came in, I asked what work has been carried out on the greens and what plans are there for future maintenance? "We have applied between thirty-five and forty tonnes of topdressing since April, mainly filling in a lot of core holes from last winter. The verti-cutting units have been on as much as possible to help clean up the surface. We are cutting at 3.5mm using a triple mower and now they will be cut or rolled seven days a week up until the winter months."

Michael doesn't have a set fertiliser programme for the greens at present and has not needed to use any fungicides. "In April, I applied ICL's Greenmaster Cold Start, followed a month later with Greenmaster 8:0:0. I topped this up with a treatment of ICL's H2Pro wetting agent and seaweed mix every three weeks. We have been getting some great results; the sward is thickening up and the root depth has improved significantly. I will look at carryimg out soil tests in the coming months and put a more rigid fertiliser programme together based on the results. We haven't used any fungicides since I have been here, but there was quite a lot of disease scars after last winter. As a result of topdressing, verti-cutting and a little hand seeding, it seems to have recovered and, luckily, we haven't seen any signs of disease so far this season."

Having only being at the club for three months at the time of the interview, I was interested to know what Michael's main challenges have been. "I would have to say the biggest was getting grass back on the course as it suffered quite badly last year in the drought. The fairways were pretty much burned out, greens were a bit thin in places and surrounds and approaches were quite poor. We have done a lot of maintenance over the last three months to get them back in play."

What's your plan going forward? "It will be a matter of 'wait and see' at the moment and determine how things develop over the summer. The club has just invested in a new Charterhouse Speed Seed, and I believe it is the first one in Scotland - it's a new model. So, I intend to overseed the greens with a bent grass seed mix then, at the back end of the summer season I will use a fescue grass seed mix on tees and any worn areas on the fairways. It will also be a case of putting an aeration programme together for the greens and tees, consisting of terra-spiking and hollow-coring."

Whilst Michael was giving me a buggy tour of the course, I couldn't help noticing the severe undulations in the fairways as we bounced up and down. I joked with Michael about who picks the short straw when it comes to cutting the fairways. "We take it in turns - it is a real backbreaker and you have to take your time. We are cutting at the height of 12mm, using a Jacobson LF fairway mower with greens units as this seems to work best, but the fairways really do test the reliability of the machines."

Since he arrived, the club have supported his requests for new machinery to help improve the quality and presentation of the course. "We have just purchased a new seeder outright and a Toro greens machine which was second-hand. Going forward, the club is hopefully going to look at a renewal programme to replace the machines every two or three years. I haven't put a list together of what machinery is required just yet, but the main aim was getting the new greens machine. We will decide at the end of the season what's needed." 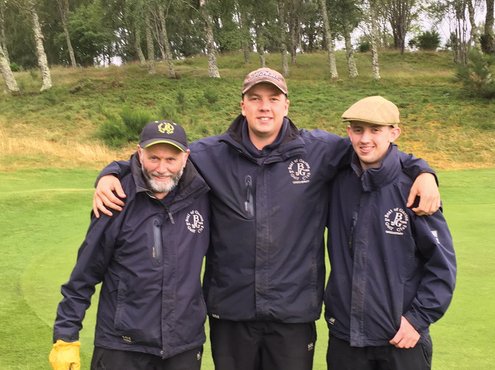 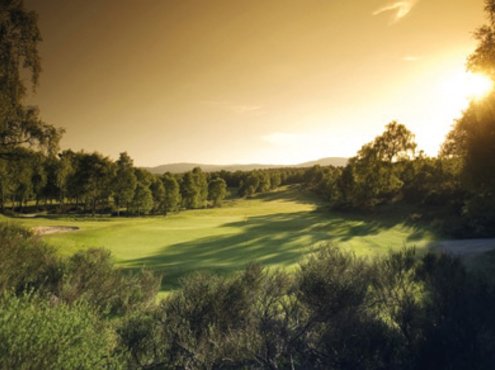 Are you loyal to any one local dealer or manufacturer? "I do like Toro when it comes to greens machines, but it will be what best suits the course with the terrain. We will probably have to have a lot of demonstrations of various machines to see what works best out there."

General servicing, machinery maintenance and cylinder regrinding are carried out in-house. However, if it is something Michael and his team can't fix, the work be outsourced.

Plans for future projects are yet to be discussed, but Michael already knows what needs to be done. "For me, we need to do a lot of bunker renovation, and the pathways need looking at. On top of that, it will be a matter of what the club believes are their priorities and what budgets are available."

Michael tells me wildlife is abundant out on the course from rabbits, deer and badgers - to name a few, but they can cause damage from time to time. "We try not to disturb the wildlife as they add a focal point for our overseas visitors, so we just tend to tidy up after them. Unfortunately. we do suffer from moles, so we do have a local guy who comes in to help control them."

The course is close to Loch Garten, a large Highland freshwater loch, which is surrounded by the tall pine trees of the Abernethy Forest (adjacent to the loch), which is an RSPB nature reserve. The loch is renowned for its breeding population of ospreys, which lends Boat of Garten its nickname 'The Osprey Village.' With this in mind, I asked Michael if he's been lucky enough to spot any on the golf course. "Not yet, but I may get lucky in my time at the club. As I said earlier, we are blessed with an abundance of wildlife which can be seen when you're out on the course." 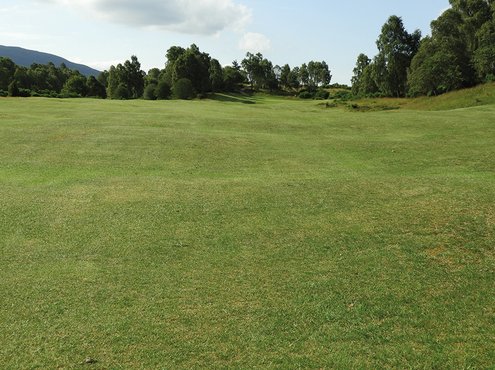 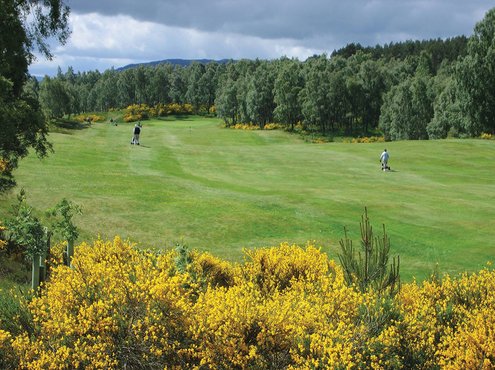 The Boat of Garten Golf Club was founded in 1898 and the celebrated Scottish architect James Braid was asked to convert the original 9-hole layout to an 18-hole course in 1930. It's a short course, measuring slightly less than 5,900 yards from the back tees.

"The Boat" is set alongside the River Spey in the heart of the Cairngorms National Park, only ten minutes drive from the bustling village of Aviemore. The Boat of Garten is also known as the Osprey village. The River Spey lies to the east of the heath and beyond that are the distant peaks of the Monadhliath Mountains. Dominating to the south are the mighty, snow-capped Cairngorms.