After the shock abandonment of Glamorgan's Royal London One-Day Cup clash with Hampshire due to an unsafe pitch, the head groundsman has been suspended 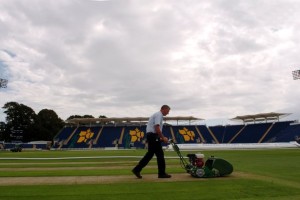 Glamorgan have suspended head groundsman Keith Exton ahead of Monday's double-header between England and Australia at Cardiff's Swalec Stadium, it has been revealed.

Exton was put on 'gardening leave' after the Welsh county's Royal London One-Day Cup clash with Hampshire was abandoned because the wicket was deemed too dangerous to continue.

An England and Wales Cricket Board panel subsequently docked Glamorgan two points and fined them £9,000, plus ordered a payment of £4,000 be made to Hampshire to compensate the county's travelling fans.

It was the strip which had copped Glamorgan a two-point penalty when it was marked "poor" for a one-day match with Durham last summer.

Exton, pictured, who faces an internal club inquiry with further disciplinary action a possibility, won't have any part to play in preparing the designated pitch for the women's and men's internationals between England and Australia. His assistant Robin Saxton, who moved to Wales from Worcestershire two years ago, has been put in charge of groundsman duties for those back-to-back Twenty20 shoot-outs.

"The problems we have had concern only that one pitch," said a Glamorgan spokesman. "We have never had any issues with the international pitches here. It's not an ideal situation, but we have every confidence in Robin."