by Matthew Campelli
in Synthetics and Rugby
on 10 Jun 2016 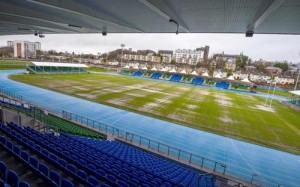 The Pro12 team saw its field badly affected during last winter's heavy rainfall and had to play three matches away from Scotstoun, while a fourth match was postponed.

The mooted pitch installation - which, according to the club, meets World Rugby guidelines - will reduce the risk of fixture postponement. As as part of the work planned, the adjacent training field will be improved, as well as the athletics facilities for International Association of Athletics Federation (IAAF) events.

Glasgow City Council's Executive Committee will be asked to approve the investment works this week. If the project gets the green light, it will be funded by the council, Scottish Rugby, Glasgow Warriors and sportscotland.

Work will commence later this month and is expected to be ready ahead of the 2016/17 season.

Glasgow Warriors coach Gregor Townsend said the "state-of-the-art artificial surface" would give the team the opportunity to play a "high-tempo game".

Nathan Bombrys, Glasgow Warriors managing director, added: "After the challenges of last season, it's great that we're close to installing a pitch that will give us a consistently excellent surface all season, to play the exciting rugby that we like to play.

"We believe the new artificial pitch could also open up opportunities to bring some additional rugby matches and events to Scotstoun, which will assist our efforts to grow the sport in the west of Scotland."

Warriors' Pro12 rival Cardiff Blues already has an artificial pitch, while Premiership clubs Saracens and Newcastle Falcons play on 3G surfaces. Worcester Warriors is also planning to install its own artificial pitch over the summer.