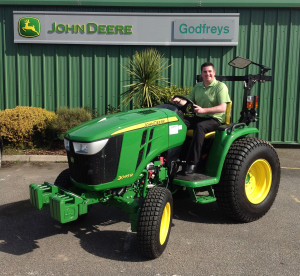 Alan joins the company from Ham Manor Golf Club in Angmering, West Sussex where he has been employed since 2004, the past seven years as Course Manager. Prior to that Alan has worked at a number of other golf clubs in Sussex and also for turf equipment dealers in the county.

While at Ham Manor Golf Club, Alan underwent BIGGA's Master Greenkeeper Certificate programme, becoming the 54th MG globally in 2010, the youngest ever at the time. This level of knowledge and understanding of the golf course environment and market will be a real advantage to him in advising golf and sports clubs on the correct type of equipment for their specific applications, says Godfreys Golf & Turf.

As part of his role, Alan will directly manage the West Sussex golf and sports turf market and can be reached on 07855 243504 or alan.pierce@godfreys.com. He will work with Alan Crouch, who recently assumed the role of Area Sales Manager for East Sussex, working from the dealership's Hailsham branch. Godfreys Golf & Turf will also be looking at additional ways they can add support and value to their golf and sports turf customers, harnessing Alan's greenkeeping expertise.