Dateline July 2008: I had been invited to enjoy a day's cricket at Chelmsford as a guest of Ongar loam. I left home in the morning, looking forward to an enjoyable day with other like minded people who love to talk about cricket and to meet some old friends that I don't often see.

At this point in time, I didn't know how this particular day was going to affect my life over the next two years.

I arrived at the ground at 10.30am and made my way to the hospitality suite and enjoyed the normal formalities of coffee and chatting with the hosts and other guests. I was then introduced to a couple of guests who had come over from that great cricketing nation of Holland, (well, they did beat England in the one day international at Lord's this year). Their names were Frits Makkee and Michel Luitgaarden.

The purpose of their visit was to source a suitable loam to construct a grass square for their respective clients. Frits was working on behalf of Voorburg cricket club and Michel for Excelsior 20 cricket club.

We had a lengthy discussion, with various members of the hospitality suite, on suitable construction methods. But, the one thing that was being overlooked was the stability of the soil in Holland. The problem that had been encountered with other constructions of grass squares was, primarily, the sinking of the square because of the unstable soil conditions.

At the end of the day we exchanged our contact details and we left for our respective homes.

I was contacted again, after a few days, by Frits and was asked for a suitable specification for the new square at Voorburg, because he felt that I understood the problems they could encounter with the construction on unstable soils. This arose from my discussions with him on my background in the construction industry and my location, being on reclaimed land in the Fens which is similar to Holland, and could appreciate what his concerns were. 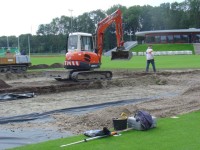 I supplied a specification using a suitable stabilising fabric in the base of the construction, similar to that used in road building on unstable soils, on top of this a suitable aggregate to a depth of 150mm was to be used and suitably compacted. Another layer of fabric was then to be installed and this covered with a suitable clean sharp sand to 50mm, followed by a minimum of 170mm of suitable loam. This would give a total construction depth of 300mm and would keep the construction clear of the controlled water table of 600mm at the drainage pipes, and avoiding the capillary rise in the soil between the drainage pipe runs.

The cricket loam was sourced from Ongar Loam because a suitable clay soil was not able to be found locally in Holland or, for that matter, in Germany, and it is known that the soils in England are tried and tested because they have been used for cricket for many years.

An all ryegrass mixture of seed (Lollium perenne) was to be used, supplied by one of the reputable seed suppliers. 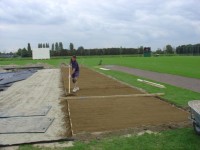 This specification was adopted, and I made my first visit to Holland for many years to inspect the site and to check the indigenous soil before the final construction work could begin, to ensure the specification would work.

During my visit, at the end of August, I also visited Kampong Cricket club, Excelsior 20 and VOC. Kampong and VOC have grass squares, and Excelsior 20 was the other new square to be constructed.

The square at Kampong had some problems with its performance and I was asked if I could give some advice. When a core sample was taken I could see there was a problem with poor root structure and depth of root. This was caused by a lack of good aeration, compaction and 'over exuberance' with the roller - there was also a problem with thatch. The square had also suffered from sinking which they were trying to rectify. Fortunately, I was able to give advice on some maintenance procedures to help rectify some of the problems.

From my discussions with the Mike Farrant at Kampong it was clear that there had been little or no training in the work required to produce and maintain a grass cricket square. Also, they did not have suitable equipment for carrying out the work - this was also the case at VOC. During my visit the possibility of me returning at a later date to deliver a suitable training course was discussed by all parties. 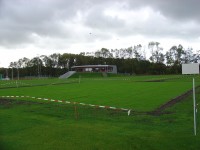 I was now satisfied with the specification at Voorburg and so the construction was able to go ahead under the guidance of Frits Makkee. The work was contracted out to Chris Boniface and was started at the end of September. I was able to keep in touch with progress by email and lots of photographs to ensure the work was carried out satisfactorily.

The work was completed in two weeks and the weather remained fine for the whole construction process. The square at Excelsior was also constructed, but they did not use the specification I had produced for Voorburg. I understand that it was constructed using a river clay base and topped with Ongar Loam.

The square at Voorburg had good germination, rapidly established a healthy sward and was suitably maintained through out the winter.

Holland now has six grass squares and it is anticipated International cricket will be played there on a regular basis in the future.

Cricket is played by around 5,500 people in Holland but mainly on non turf pitches. There is encouragement for junior cricket from the Koninklijke Nederlandse Cricketbond (Royal Dutch Cricket Board), but for the players to compete at the higher levels they need to play on good, well maintained grass pitches and, in some small way, I hope I can play a part in helping this to happen.

I will continue this article later with what happened in the spring of 2009.