A Sussex country estate mentioned in the Domesday Book a thousand years ago, and world famous for its Capability Brown gardens, has an indelible and lasting link with cricket in Australia. Neville Johnson went there to see a pitch with an intriguing and rather surprising history. 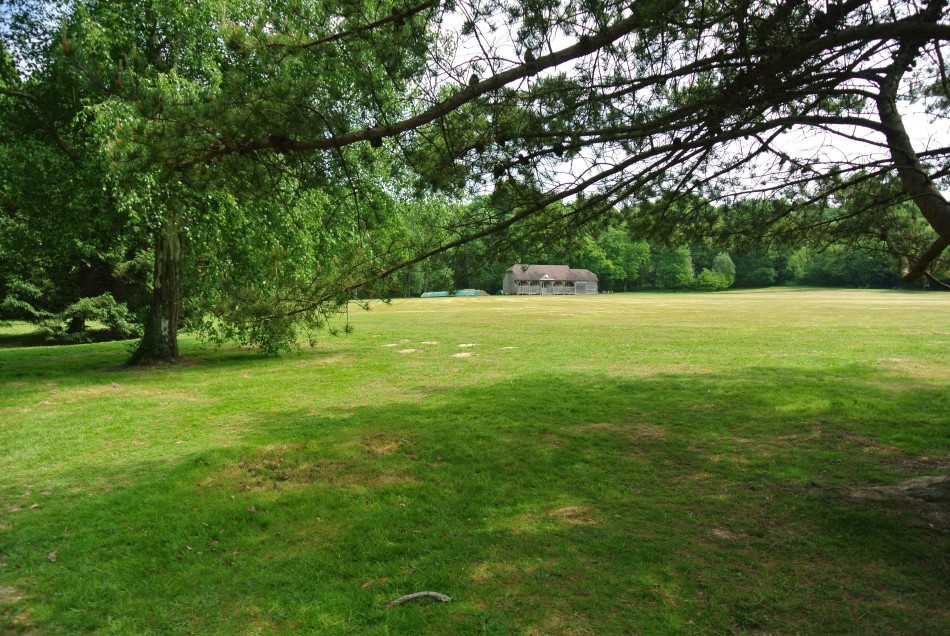 he rich colour of rhododendrons and azaleas in early summer; the spectacular autumn hues of native trees in autumn are what bring tens of thousands of visitors year after year to Sheffield Park in East Sussex. Tucked away within the extensive estate there too is a sedate and delightful cricket ground that has a regal past and a very English revival.

The Park, one of the country's most popular garden, parkland and arboretum attractions, has been in the care of the National Trust for over sixty years. It surrounds a striking late eighteenth century Gothic country house that remains in private hands. It was the latter Victorian years when the third Earl of Sheffield was in residence that cricket and the Sheffield Park Ground became an established part of the landscape. His name, was not long after, to take cricketing roots down‐under.

Cricket had been played on the Sheffield Park estate as far back as 1845, but it was a venue only for local Sussex teams. When the third Earl took over from the second, the passion was greater; the ambition higher. A serious Sheffield Park Ground, fit for a higher level of the game, was laid in 1876.

Andy Jesson is the Park and Gardens Manager at Sheffield Park. He takes me to the site where a Lord Sheffield XI took on the Australians in the first match of their first Test tour of England in 1884. They were heavily defeated by an innings and six runs, but it was the start of an enduring relationship.

This was the golden age of cricket. WG Grace, CB Fry and other big names were 'like that' with the Earl, as was the Prince of Wales (later Edward VII). Sheffield Park hosted many a big match. In cricketing circles it was a social pinnacle.

In May 1896, the opening game of the Australian tour here at Sheffield Park attracted 25,000, which is not far short of a full Lords today. The Prince of Wales was top guest and no expense was spared. Lavish cast iron pavilions were filled to the gunnels. Sign of the times, there was even a ladies' pavilion. Banners lined the route from Sheffield Park station. This was a big sporting event. 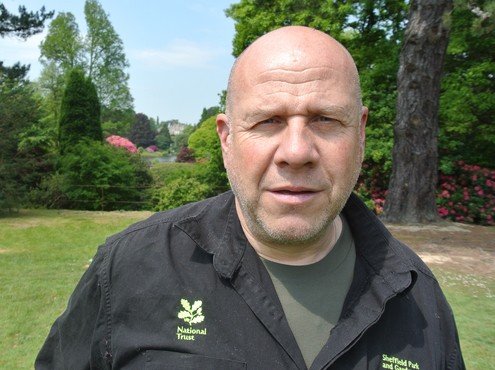 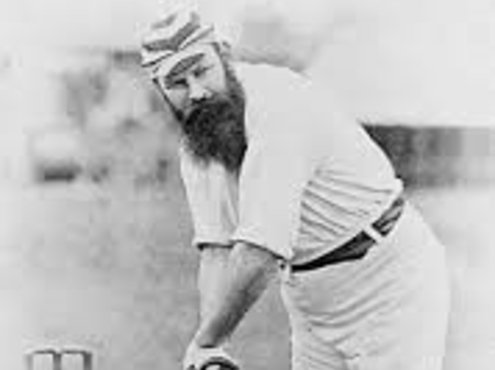 Left: Andy Jesson Right: WG Grace, one of the stars of Victorian cricket to play at the first Sheffield Park ground

The Earl was a passionate patron of the game and was very much associated with early England tours to Australia. In 1891, he went there as promoter of the England Test team, led by WG Grace. At the conclusion of the tour, he donated £150 to the New South Wales Cricket Association to fund a trophy for an annual tournament of what was then called 'intercolonial cricket' in Australia. It grew to become Australia's principal domestic cricket trophy, contested by all its states, and arguably with more staying power and appeal than our County Championship, the Sheffield Shield.

After the Earl's death in 1909, cricket at Sheffield Park began to decline and, since the First World War, the ground barely used. Sadly, he died virtually penniless, due largely to his extravagancies, and without an heir.

The estate passed through several owners before being left to the National Trust in 1954. The pitch was ploughed up during the First World War and, although matches resumed between the wars on a nearby pitch, cricket finally died out when the whole of Sheffield Park grounds were requisitioned during World War Two and used as a base for Canadian troops. What had once been a cricket ground became a conifer plantation dotted with Nissen huts.

In 2009 though it was leased to a Sussex cricket club called the Armadillos and restored to its former glories. Andy tells me how this came about and the early preparation work.

"Back in 2002, the year I came here, the National Trust decided that the infrastructure at Sheffield Park wasn't able to meet the logistics of events held there," said Andy.

They took the decision to change the then wooded ‐ and frankly unappealing ‐ former cricket ground into an events field. 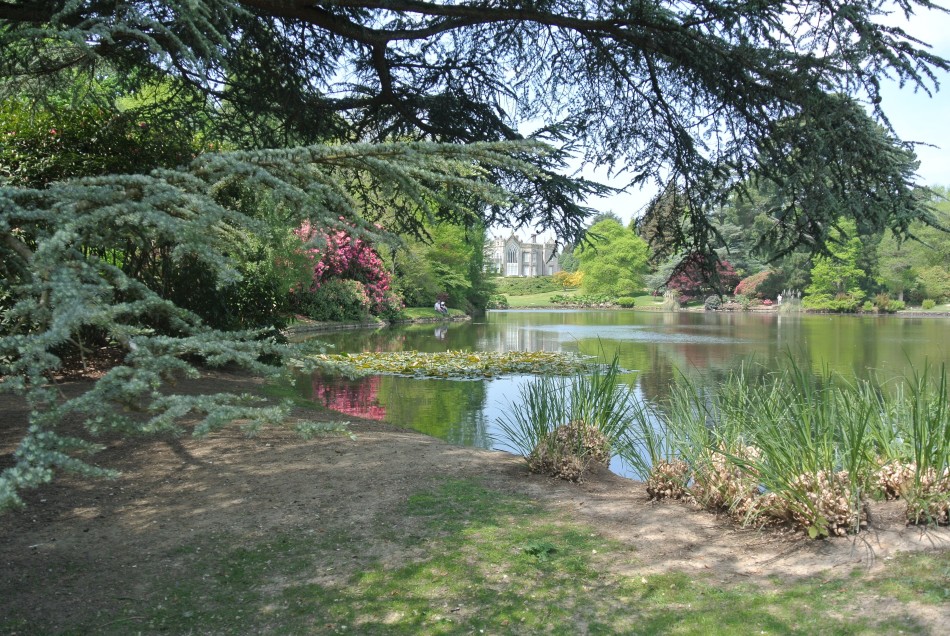 "We cleared all the trees, and had it power harrowed and roughly levelled by a contractor," he said.

"A seed mix with a wildflower element was sown all over. The site was then fit to be used to host concerts and the like.

Approach ways were made with hardcore, then screeded off to make them 'green' yet able to take necessary heavy goods traffic."

Just six years on, the high risk of rain affected events prompted a rethink and the idea of rekindling the cricket heritage born. Andy explained the reasoning:

"It had always been the National Trust's intention to host country house cricket just as The Earl of Sheffield had more than a century ago. The cricket ground is integral to the whole Sheffield Park landscape."

"We wanted to restore it as the focal point of the journey through the cruciform lakes. The gardens in the Earl's day were landscaped specifically to make the walk from the house to the ground as colourfully beautiful as possible. The gardens needed to be at their peak when the matches were being held. That is why Sheffield Park is famed for being a late flowering garden and many of the hybrid rhododendrons here were selected to flower well into June."

"A lease agreement with a Sussex cricket club called the Armadillos was made, giving them use of the events area as their home ground. They wanted a really top quality square and set about restoring the ground to something like its former glory." 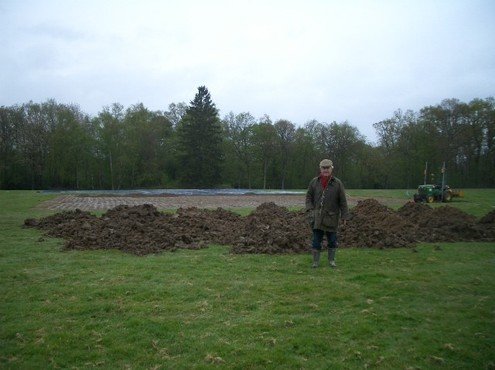 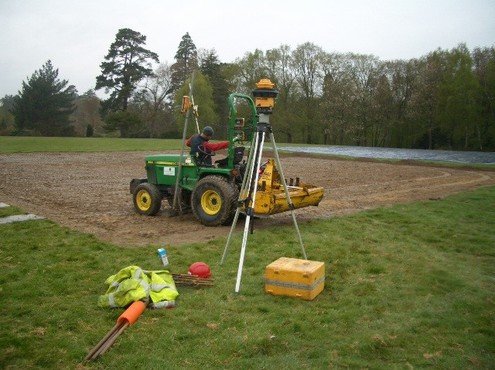 Left: Surface soil removed ahead of the 2008 square installation, Right: Laser levelling of the new square

The Armadillos, formed in 1983 and named, it is said, because the team had a long tail, played a country house type of cricket, but didn't have a home of its own. They had actually been playing home fixtures in the grounds of Highbrook House at nearby West Hoathly. Peter Wigan, one of the club's stalwarts and its ground secretary at the time, takes up the story:

"Our initial inclination was to keep down the cost of laying a square, but the decision was taken, in order to produce a first class playing surface, that no expense should be spared," he said.

"Cricket pitch specialist Steven Pask, based in Lincolnshire, was commissioned to construct an eight pitch square for us, and work began in April ten years ago."

"Its position and orientation were a concern and we even monitored the passage of the sun to get it right, given the surrounding tree line. Much time was spent measuring imaginary boundaries as well, until we established that the pitches should run almost due north‐south. The square back in the WG Grace days ran in a more east‐west direction."

The area beyond the boundary ‐ what Andy Jesson refers to as the outfield outfield ‐ had remained largely wooded. This was thinned by the National Trust, and the ground levelled to create delightful surrounds, which Andy and his team continue to maintain.

The club also commissioned a new oak‐framed pavilion, carefully aimed at being a haven for welcome wildlife guests like barn owls and bats. The National Trust had mains water installed for this and the watering of the square. 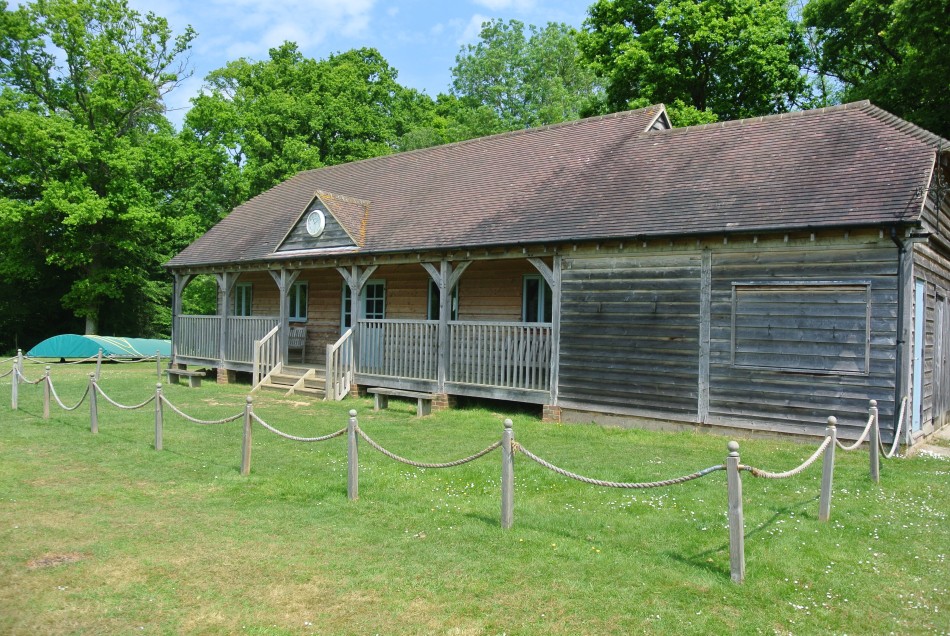 "Once the terms of the lease with the Trust had been agreed, all of us in the Armadillos took on the new pitch project with relish. Sheffield Park is now very much our home."

Among Peter Wigan's local friends was none other than the late Christopher Martin‐ Jenkins, who was one of the original patrons of the Armadillos.

"Christopher came to the ground and took an interest in how the club was carrying out its refurbishment," said Peter. "We also had valuable input from Sussex County Cricket Club along the way."

The club's initial ten-year lease has just been renewed with the National Trust for another ten, with a further ten year option. It's very much an ongoing project and Armadillos cricket is getting to be a permanent and welcome feature of Sheffield Park life. National Trust visitors are free to see it and feel the history, and watch the Armadillos if a game is on.

As for the routine upkeep of the renovated ground since the Armadillos took up residence, Club Chairman Phil Davy says that it has been carried out by a series of local groundsmen with occasional professional advice from the Sussex Groundsmen's Association. Currently, the Sheffield Park square is being managed by Chris Vacher, who looks after a number of local club pitches, including Newick and Maresfield.

Andy Jesson has getting on for 500 acres of grounds all told to keep in prime condition. He has a team of eight full‐time professionals and over forty volunteers to ensure that the legacy of Capability Brown lives on and the amenity areas are always first class. As far as the cricket ground surrounds are concerned, regular cut and drop tidying of these areas using a New Holland MC35 with a Port Agric front‐deck is the routine. 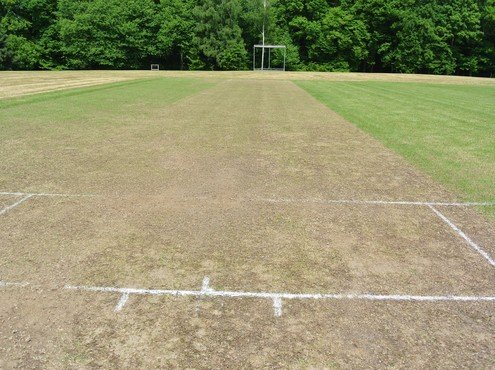 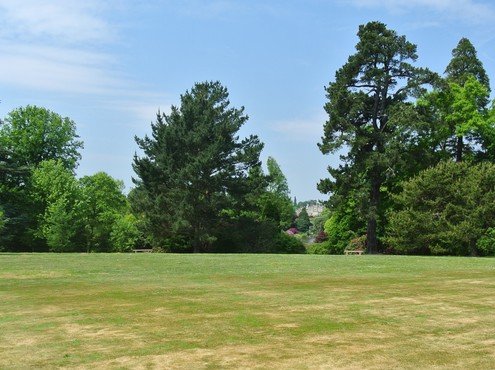 Left: The first used pitch of the Armadillos 2018 season, Right: The glorious distant view of the Sheffield Park House from the boundary

Andy had originally been a fine turf man back in the early eighties working on Manchester City Council's bowling greens and golf courses. In 1986, he switched to his passion, arboriculture, which eventually brought him to Sheffield Park in 2002 as Garden and Park Manager.

The gardens and grounds in his charge are an outdoor flagship attraction for the National Trust and get over 300,000 visitors each year. Andy says the aim is always to be at the forefront of greener land care and, for this, a number of strict rules are followed.

"We are irrigation‐free, pesticide‐free, and fertiliser‐free," he said. "Our lakes discharge into the River Ouse and we try to demonstrate to the public that we are responsible custodians of the whole property. All trees and shrubs here grow and thrive by the most natural means possible. We only cut grass in the gardens to an inch and a half to ensure greenness."

"We said to the Armadillos at the outset that we would give them exemptions should they need it, but fertilisers and dressings are kept to a bare minimum."

Grass care at Sheffield Park is for Andy a complete contrast to his earlier life keeping fine turf playing surfaces trim and doing their job. 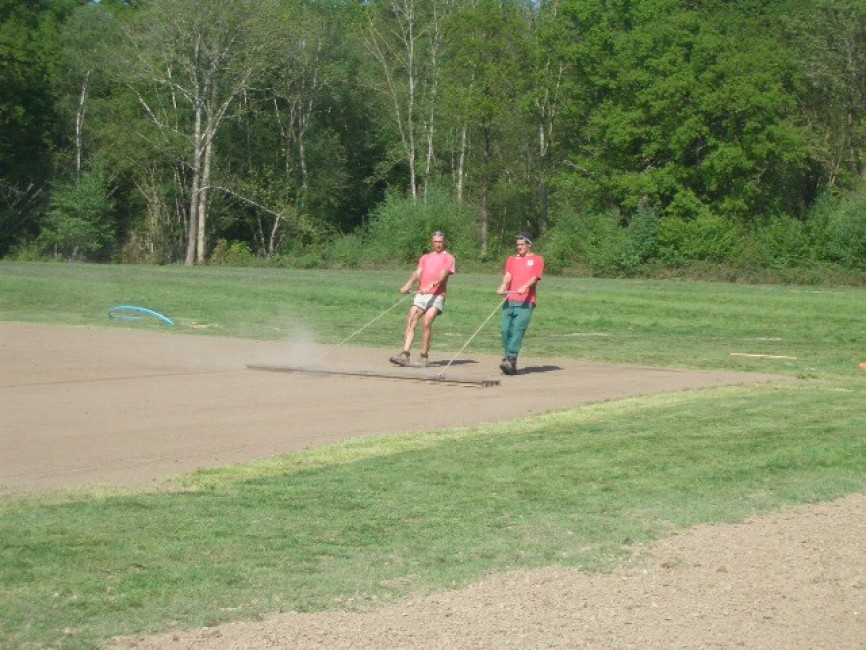 Manual levelling of the installed surface

He uses general mixtures for parkland and gardens grass areas trying, where appropriate, to encourage wildflower growth. For this reason, in some areas he holds back cutting until about the second week in July, followed by rake off. The grassed parkland areas are a full restoration project aimed at uplifting it from the highly fertilised farmland it was when in private ownership. This is just one of several ongoing restoration programmes designed to rescue and maintain the heritage landscape of the whole estate. Sustainability is very much the watchword.

"Grass here is meant to sit with the trees and shrubs, and be part of the landscape," he said.

The restored cricket ground is as much a part of the Sheffield Park experience for visitors as anywhere else here. It's being enjoyed every day, not just on match days.

The project has clearly been an enormous success. The Third Earl would undoubtedly approve.