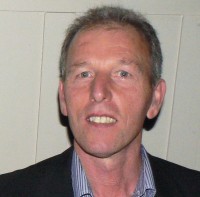 "Members are used to playing throughout the year, whenever they want, whatever the weather - and they expect the courses to play well and we, as a profession, have to adapt and learn so that we can keep pace with the demand"
Gordon Brammah, Course Manager, Hallamshire Golf Club

Gordon Brammah, Course Manager at Hallamshire Golf Club, is in his thirtieth year at the Sheffield club. "It's remarkable that, since the golf course first opened its door in 1897, there have only been five head greenkeepers. That says a lot about the place and the industry," he says.

Gordon came as Head Greenkeeper, but, he said, over the years that role changed dramatically and took on more of a management slant - with staff training, health and safety, planning and budgeting coming under the banner, so Gordon feels it was right to change the title to better reflect the job.

Chris Whittle came to Royal Birkdale eighteen years ago from Muirfield, but has been in the business much longer than that, including as Head Greenkeeper at St. Annes Old Links Golf Club. 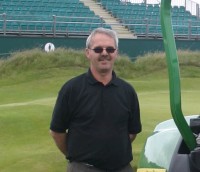 He loves his job, always has, but agrees with Gordon that there have been plenty of changes to contend with in the last ten years or so.

"The job now is definitely much more demanding. Standards go up all the time. Presentation is so important - and expectation from the golfers too - and all that is good for us all, and for the game"
Chris Whittle, Course Manager, Royal Birkdale

"The most obvious thing in the workshop is that it's more the norm for golf courses to have their own grinders, and this is led by climate change. We don't have definite seasons any more. The golf course is growing almost twelve months of the year. There was a time when we put the mowing machines away until Easter. Now, we use them all year round, so we do need to grind more often. With that, of course, golf is played right through the year. Better weatherproof clothing makes a huge difference, so the members are happier to go out in all weathers."

"We found it cost effective to have our own grinders, and also much more convenient not to have the machines taken off site. It is good for the staff too. They get used to looking after their machines themselves, they understand better how to set a machine and look after it."

"The grinders are so easy to use and we see a difference if we keep the machines ground. We use fewer bottom blades and bearings. Wear and tear is noticeably better, without a shadow of a doubt, and also fuel saving as they are working at their optimum."

At Royal Birkdale, Chris says, "We are at the extreme side of the game, so we only see constantly full membership - and many of our members have been here since they were juniors. They probably don't remember a time when they didn't expect to play right through the year. The job now is definitely much more demanding. Standards go up all the time. Presentation is so important - and expectation from the golfers too - and all that is good for us all, and for the game."

Gordon shares Chris's views. "I love my work and find it very rewarding, although these times are certainly more challenging than they have been for some while, and budgets have actually decreased this year, whilst demand from the golfers is increasing." 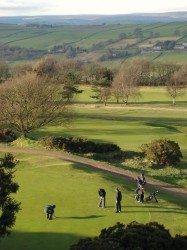 "Probably everyone will blame the economic downturn, but all sorts of things put pressure on greenkeeping. Not least climate change, shortage of money, expectation and the demand for higher standards. There's probably not the investment in the industry to match those expectations, so greenkeepers tend to get pressure from all directions."

"One of the biggest challenges in our profession is the change in climate because, when I first came into the job thirty years ago, temporary greens were quite common. We'd have drainage issues - and that was the only way of maintaining play. You just don't see them any more. Members didn't expect to play right through the winter. If they played a few rounds, they were happy, but now people expect to play almost every day - and on proper greens. These changes have been so gradual I suspect most members can't remember what it was like then. They are used to playing throughout the year, whenever they want, whatever the weather - and they expect the courses to play well and we, as a profession, have to adapt and learn so that we can keep pace with the demand."

"I do think the job of greenkeeping has become much more professional. BIGGA (and I am President of the local section) keep working at this, and we have come a long way. If you think about the way the job has grown, it is not surprising. I remember in the early years I'd spend the greater part of my time outside. These days, I couldn't possibly do that."

"There's a lot of technology, the machinery is much more sophisticated, and we deal with computer systems, design and managing budgets every day - so I see this as a good thing. I've learned to be more efficient by not being at the coalface every minute of the day. I still have to be out there leading and making sure each job is done well, and that the team doing it are confident in what they are doing. There is a lot to oversee."

"Communication at Hallamshire is so much better now and plays a part in keeping everyone informed. I write a Greens Report every month - always have - only now we put it online so that all the members have access to it. Before it went online, very few people bothered to look at it. Now, everyone can and it makes the members feel more involved. I think it also makes them appreciate the job the greenkeeping team does and value their skills and the contribution they make to the success of the club."

"Oddly, this year has been one of most successful in terms of income and feedback, despite greens fees increasing by around 40%. Maybe this is because the club has become more aware of marketing and our potential. We've developed our website and improved our communication. We have a policy for the environment, planting new heather and improving natural features, which is popular with members."

"We've had our Bernhard grinders since 2006 and we use them more regularly now. Over the years, we have learned what works for us and we're pretty quick at turning them round. They are very user friendly. If you grind regularly, you are fine-tuning all the time so, of course, it gives us the opportunity to look over the mowers and replace bearings and rollers etc. at the same time."

"Before we had our own grinders we probably sharpened mid and end of season, and that was it. Then we had that dreadful job of backlapping. That was my least favourite job. Now, of course, it depends on the season. We topdress regularly, so sometimes we grind every couple of weeks and this might go to once a month."

Both Chris and Gordon have adapted to the changes over a relatively short time. The demands of the job and the expectations of the members make it impossible to do otherwise but, through change, the golf courses have become slicker, the greens healthier and far more consistent, and the job has become more inclusive and professional.