Swedish greenkeeper Daniel Grant is the 2017 winner of SRUC Elmwood's annual John Deere HNC Student of the Year Award, sponsored by John Deere and Scottish turf dealer Double A. Daniel was selected for his outstanding commitment and attitude to his programme of studies at HNC Golf Course Management level during the 2016/2017 academic year. 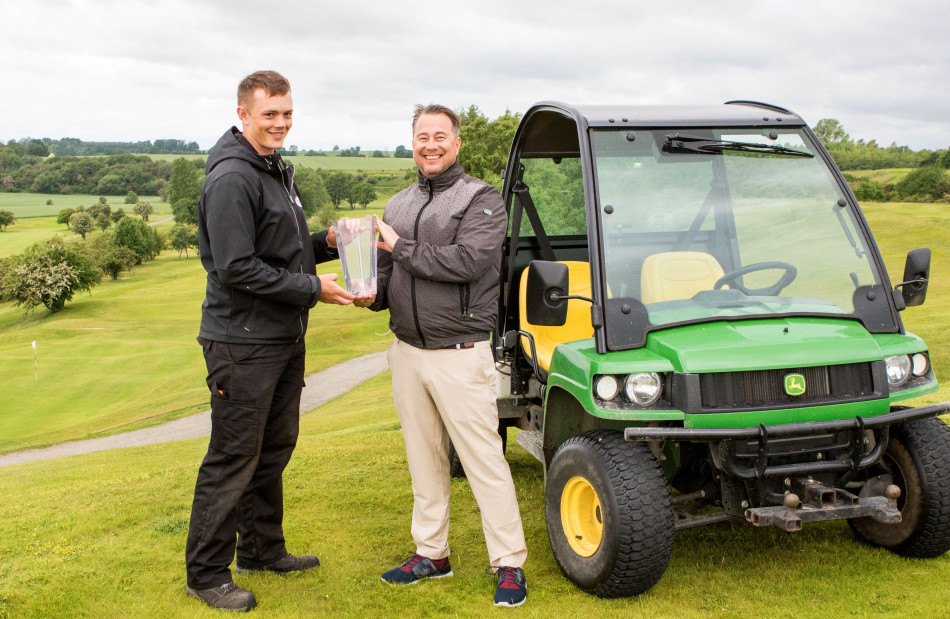 Daniel, aged 27, works at Tomelilla Golf Club in Skåne, near his home town of Ystad, which has an 18-hole main course, a nine-hole short course and Footgolf. Although born and working in Sweden, Daniel has a Scottish pedigree - his father John is the golf professional at PGA Sweden National at Bara near Malmo, having moved from Scotland to Sweden in 1987 to work at Ystad Golf Club.

The HNC course at SRUC's Elmwood campus in Cupar, Fife, was recommended by PGA Sweden National course manager Barry Crawford - another Scot, who gained the same qualification there, among others - when Daniel was working for him as a seasonal greenkeeper.

"The course was a fantastic experience," said Daniel. "I really was not expecting to receive this award, so it was a very pleasant surprise, especially as I never planned to be a greenkeeper! It came into focus when I need a full-time job after Swedish National Service. I really enjoyed my seasonal work at PGA Sweden National and Ystad Golf Club, and after the army I decided this was what I wanted to do full-time. I'm very happy being a greenkeeper, and want to progress as far as I can."

The course covers many different areas such as ecology, soil science, irrigation, drainage, design and construction, the history and development of golf and much more. For Daniel's year it finished with a graded unit where the students had to present a management plan for Auchterderran Golf Course, near Kirkcaldy in Fife.

"Although Daniel brought several years' experience and very evident practical abilities to the course, it was his engagement with learning and the desire to develop his knowledge and learn even more that shone through in all his work," said his SRUC Elmwood course tutor Stuart Mackie.

"His attention to detail and the depth of his analysis allowed him to present assignments that provided the required evidence and fully engaged the reader in understanding his conclusions. His nomination was very well deserved for the work he put into every subject."