A pilot scheme that encourages people to drop off old and unused golf clubs at their local golf course, which are then recycled, is so popular that it is already oversubscribed by venues. The project has also received government funding. The Scottish-based pilot called garage2green is both reducing waste and making it easier for beginners to take up golf without having to purchase equipment.

Supported by Scottish Golf, the Scottish government and the European Regional Development Fund, it has been granted almost £56,000 from Zero Waste Scotland's Circular Economy Investment Fund.

Some of the clubs will be distributed to golf academies - encouraging new players to try out the game, while almost half of the clubs collected to date have been donated to charity Blythswood Care, which will encourage disadvantaged youngsters to try the game.

Clubs that are too worn to play with will be remanufactured or recycled, and garage2green founder Geoff Sampson, whose company Circulogic is behind the idea, is researching product development options to keep the materials in use and out of landfill.

"My vision for the service was borne out of having a pile of clubs in my own garage that I'd kept hold of, but never got round to passing on or selling," he said.

"The more people I spoke to, it became apparent that so many clubs just sit around unused, until people just want them cleared out of the way.

"Having worked in the waste and recycling sector for over 20 years I was keen to set up a practical service that supports re-use and remanufacturing. 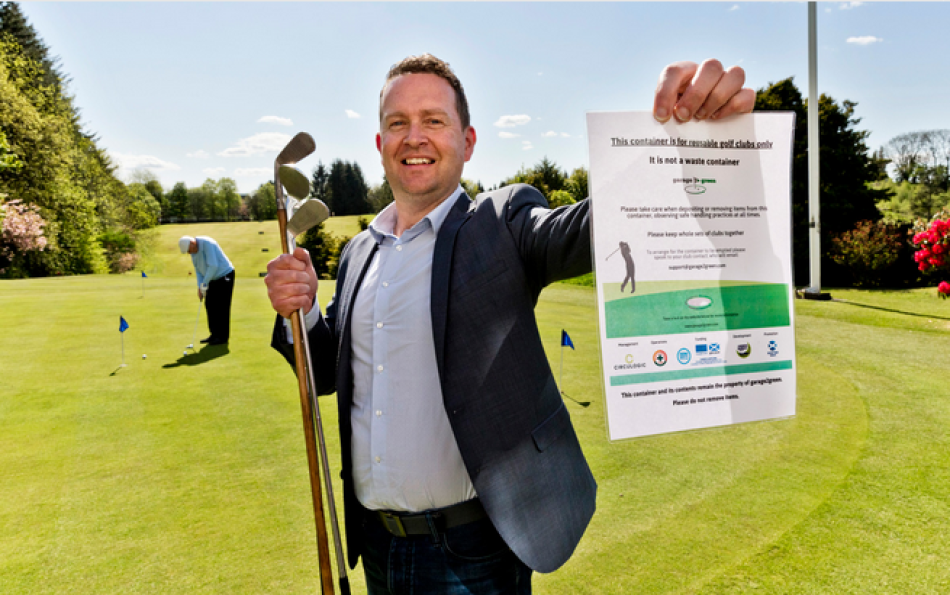 "Thanks to Zero Waste Scotland's Circular Economy Investment Fund my idea has become reality and on a bigger scale - without the funding garage2green may never have got off the ground, so it seemed only right that Scotland, the home of golf, should be the place to start. My hope is that the pilot is well received, that we can engage the wider golfing industry and that we can build a sustainable business model enabling future expansion."

One of the priorities for the pilot is to assess the materials in the reclaimed golf clubs, which would decide suitability for remanufacture. Options identified so far include bespoke lighting and furniture using carbon fibre shafts and remanufacturing and recycling options for the rubber grips.

Iain Gulland, chief executive, Zero Waste Scotland, said: "garage2green is a great idea to tap into a wasted resource - in every local street in Scotland there's likely a few garages or sheds that have a set of golf clubs that have been forgotten about.

"Not only will the pilot divert valuable resources away from being dumped in landfill, and create potential remanufacturing opportunities here in Scotland, it may help make a set of clubs more affordable and encourage new players into the sport."

The pilot is seeing containers located at golf courses for members and visitors to donate unwanted golf clubs to the scheme. There are 14 golf clubs that are currently participating, and they include Castle Stuart, Haggs Castle and Royal Dornoch.

Carolyn Hedley, Scottish Golf's environment manager, has led the recruitment of golf clubs for the pilot. She said: "I am delighted with the enthusiasm shown by clubs to be part of this pilot scheme, so much so that we are oversubscribed at this time. Scottish Golf is keen to promote resource efficiency within our membership and I'm excited that our clubs can be part of such an innovative recycling project and contribute to the circular economy."

Royal Dornoch is one of the participating clubs

Ian Matheson, head of operations, Blythswood Care, added: "Blythswood has collected donated golf clubs from the public and recycling centres for many years. This project is helping to gain understanding and so realising further material value opportunities for second hand golf clubs.