The ever increasing demand for golf, coupled with a "no chemicals" policy on amenity turf, has prompted the unique collaboration of five Dutch head greenkeepers, managing widely differing courses. 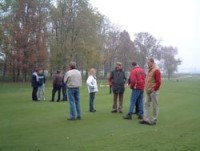 "This industry is expanding and demanding more and more," says Casper, "and we want the quality of our courses to go up. This club has a "no chemicals" policy and we have to find ways to get the results we want without fungicides and pesticides. We're looking at cultivation techniques world wide, and as the climate changes and disease patterns change we need to constantly adjust and learn."

Almeerderhout carries quite a large staff by U.K. standards, with 12 greenkeepers plus Casper and a full time mechanic, to maintain the 18 hole plus 9-hole par 3 facility built in 1987, which was extended to 27 holes & 9-hole par 3 in 1992.

"Due to the fact that we're on reclaimed land five metres below sea level, the soil is quite productive, rich and nutritious," Casper explains. "Everything keeps growing almost through the winter. Although we're on clay we're very free draining and very flexible with transport. We have no problem using heavy machinery, even in winter."

Casper contacted ProGrasS, Floratine International's Dutch distributor 18 months ago, looking for a way to improve the standard of his 37 greens.

"We need high quality greens, and the traditional methods weren't proving good enough. We started half way through the season with a partial Floratine programme. Dollar Spot is prevalent right across Holland from July onwards, and without access to fungicides we wanted to see if the Floratine philosophy of improving plant health and so minimize the risk of disease, would improve the situation."

Jan Van Mondfrans, MD and founder of ProGrasS is adamant that the Floratine programme should not be seen as an alternative to fungicide.

"We are promoting plant health by looking at the whole growing situation," he explains. "Starting with initial soil analysis we aim to redress any soil imbalance and include recommendations on turf maintenance practises to run along side product applications."

"Almeerderhout's soil was found to be lacking in oxygen, but high in sodium and hydrogen" remembers Mondfrans, "and so our first recommendation was surface aeration on all the greens. We suggested "micro" or "cross" tining as the most efficient method of increasing oxygen levels in the top three inches of the root zone. Calflex a chelated liquid calcium compound and Pervade a soil penetrant were then used to flush away undesirable elements such as the excess sodium and hydrogen. If more sodium than potassium is available in the soil, the plant will take the sodium, rather than the potassium, which it needs to fight disease," Mondfrans explains. "Although a certain amount of sodium could be due to the fact that the course is on land reclaimed from the sea, we are also investigating Almeerderhout's irrigation source."

Soil analysis also showed a serious lack of available calcium, and while ProGrasS strives to change the soil chemistry and bring it into balance with soil amendments, the grass is spoon-fed a balanced diet through the leaves. 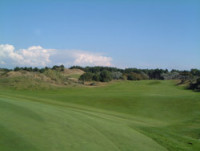 "We're also striving to re-address the plant's requirement for nitrogen", continues Mondfrans, "but this has to be a gradual process, and in the meantime we're soil applying equal amounts of granular and liquid fertiliser."

Despite the long term nature of the prescribed Floratine programme, Casper could see positive changes in the treated greens after six months, and decided to put another part of his course on a full Floratine programme during 2003. Meanwhile, experiences at Almeerderhout had aroused curiosity among other Dutch head greenkeepers, and the five courses 12-month trial was born.

"It was important to involve golf courses which were as different as possible in order to assess the capability and value of the Floratine approach," continues Mondfrans, who masterminded the trial.

By the end of last season, Casper found that the greens treated to the full Floratine programme, were stronger and healthier than those untreated. "They were a better colour and had a thicker sward with an improved root system," he reports. Take-all, the disease that attacks bent grasses, was reduced, and Dollar Spot was almost minimal over the entire course. "The lack of Dollar Spot could be down to the fact that summer temperatures were 30 degrees and the weather was bone dry," he says. "Time will tell."

Casper will be spending much of this winter evaluating the results and conferring with his fellow five professionals from all over Holland. The success of the five courses trial may be ascertained by the fact that all five head greenkeepers have voted to continue working with ProGrasS and Floratine in 2004.

Jan Van Mondfrans, who hopes to extend the project to ten Dutch golf courses this year (2004) says that in Holland the whole question of how the grass plant grows and functions is of prime importance.

"The only way that we can tackle turf diseases is to ensure the health of our grass, rendering the plants capable of resisting attack," he concludes.