1 Golf in the land of liberty

As part of Pitchcare's series on the Ohio State University's 'TOP' Program for the international transfer of student greenkeepers, youngster Gavin Keyworth talked us through his journey from Assistant Greenkeeper in muggy Mansfield to an established Presidents Cup worker at America's most exciting golf project, New Jersey's $250 million Liberty National Golf Club. 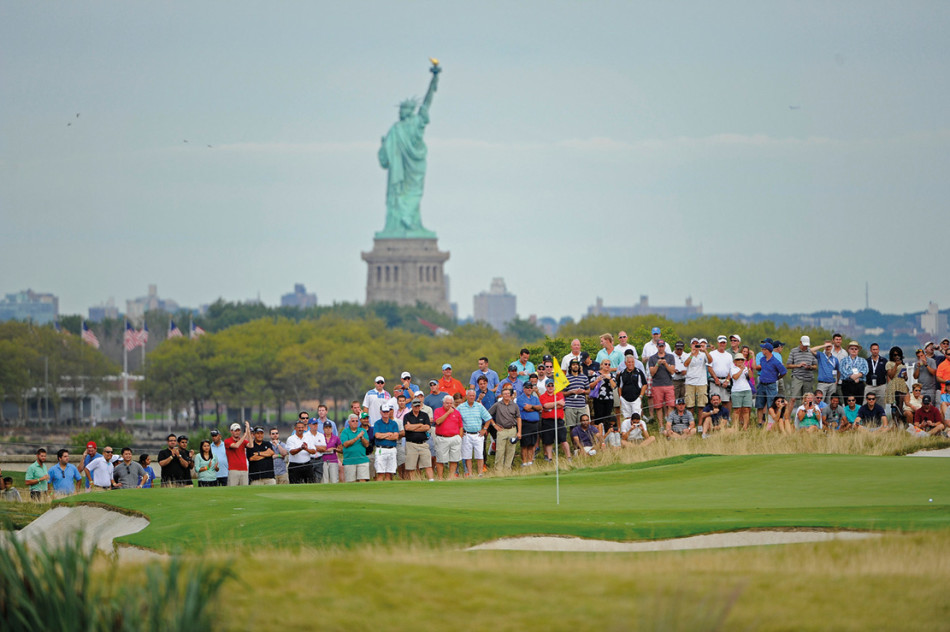 Liberty National lies just a few hundred metres from the Statue of Liberty on Ellis Island, and provides close-up, panoramic views of the Manhattan skyline.

At the time of writing, Liberty National was just days from hosting the Presidents Cup, which is like an inverted Ryder Cup - every one-to-three years, the US plays a 'Rest of the World' side containing exclusively non-European players.

This is Gavin's retrospective…

The lad from Notts

In 2011, I became a golfing member at Norwood Park Golf Club in Nottingham. I had already practised for a few years and, by the time I finished at the club, had shaved my handicap down to three.

Soon after joining, I heard about them wanting a new apprentice for the upcoming season. I applied and started almost immediately.

I took the role as an apprentice for my first year at Norwood Park, learning the basics and getting stuck into a lot of mowing, as there were only seven or eight of us through the season. 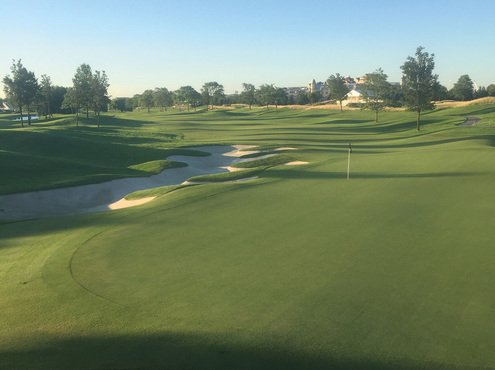 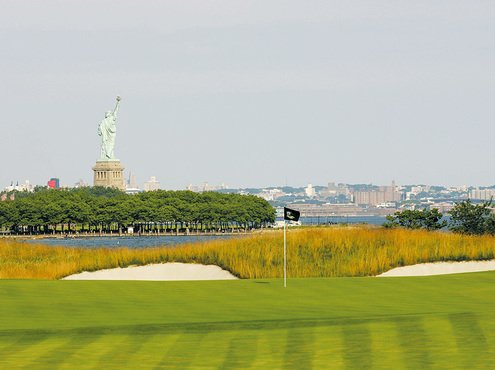 I was enrolled on an NVQ Level 2 in Horticulture and Sports Turf Management on the 'DART' Training programme, where a tutor would come to the golf club to help me with my studies for a few hours each month.

The whole team at Norwood made my time there very enjoyable, which led to us working successfully and as a great team. The course now has over 900 members, with a waiting list! It is becoming a very popular place to play, practice and just to relax.

I was there for about four years before hearing about Ohio State University's TOP Program through my boss and just knew I had to give it a go.

After getting in touch with Mike O'Keeffe and going through the process of saving and paying for what was needed, it didn't take long until I was on the plane to New Jersey in April 2016.

When I first got stateside, I flew into Ohio where I enrolled onto the programme and did my induction. I spent two days there and met all the other interns that were being enrolled.

They were from all over the world: England, Spain, Japan, Australia etc. Not all of them were doing turf management however. There were about fifteen or sixteen of us over here to work on golf courses. 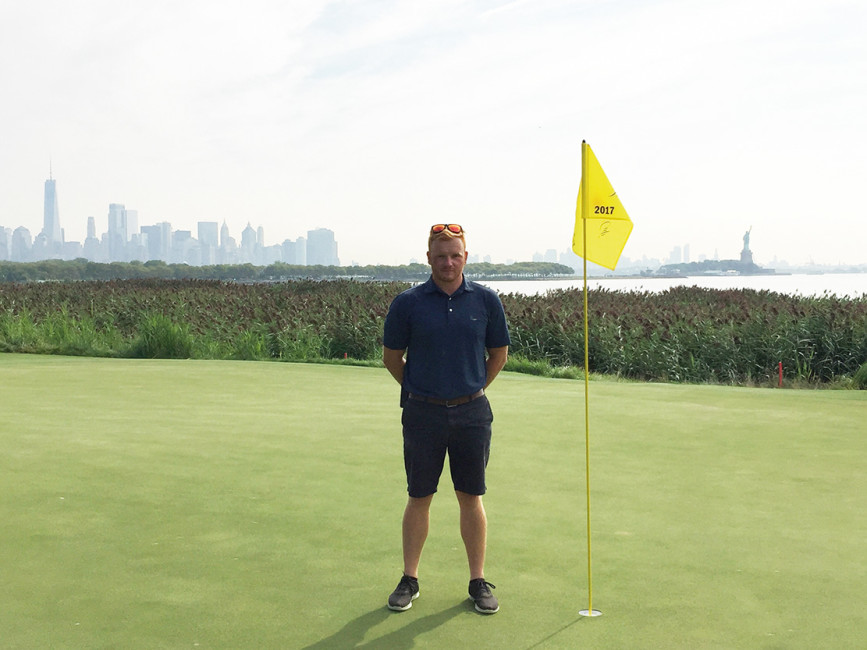 Whilst we were in Ohio, we all went and had a look around the Jack Nicklaus museum, The Ohio State University and then went to a Mexican restaurant for an evening meal, which let us get to talk and get to know one another for a short time.

After those two days in Ohio, I flew into Newark, New Jersey. The following morning, I was picked up by Jesse Dowdy, First Assistant at Liberty National.

He showed me around the course, the maintenance shop and introduced me to some of the staff that worked there, including one of the four interns I would be working alongside that year.

This was the beginning of April, and it was cold! I literally started the next day after buying some more clothing from an outdoors superstore. That was the most important thing I did in those early days. Without that clothing, I think I would have frozen to death! 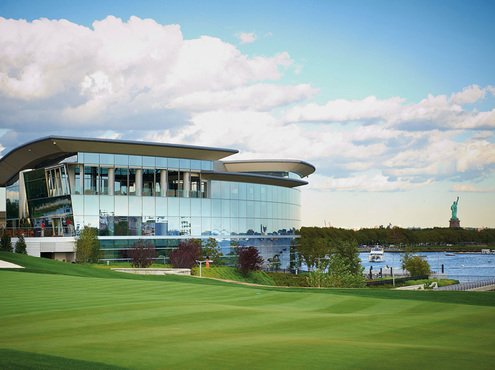 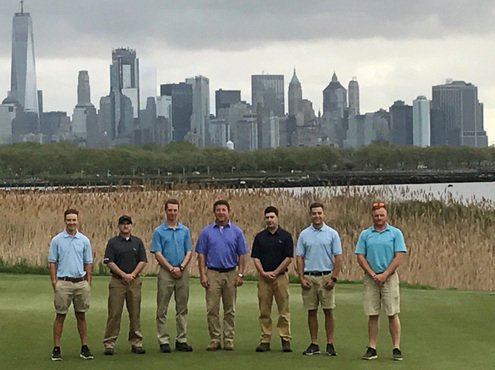 Greg James, Liberty National's Superintendent was away volunteering at the Masters the week I got there, but I met up with him the following week.

The team didn't hold back on my list of responsibilities. I was doing course set-up (CSU), Spray-hawking greens (walk-behind boom sprayer), raking bunkers and mowing greens and fairways, all within my first couple of weeks.

It was very enjoyable. The last thing I wanted was to appear to be avoiding menial work, as I was trying to make a good first impression.

There were many days at LNGC when we had to put in over fourteen hours because of tournaments at the club, but whenever there were no tournaments through the week, the hours were reasonable - usually 6.00am to 3.00pm.

Most weekends without a tournament were four hours each day, if nothing happened on the course like an irrigation problem or the course got burnt out from the sun. 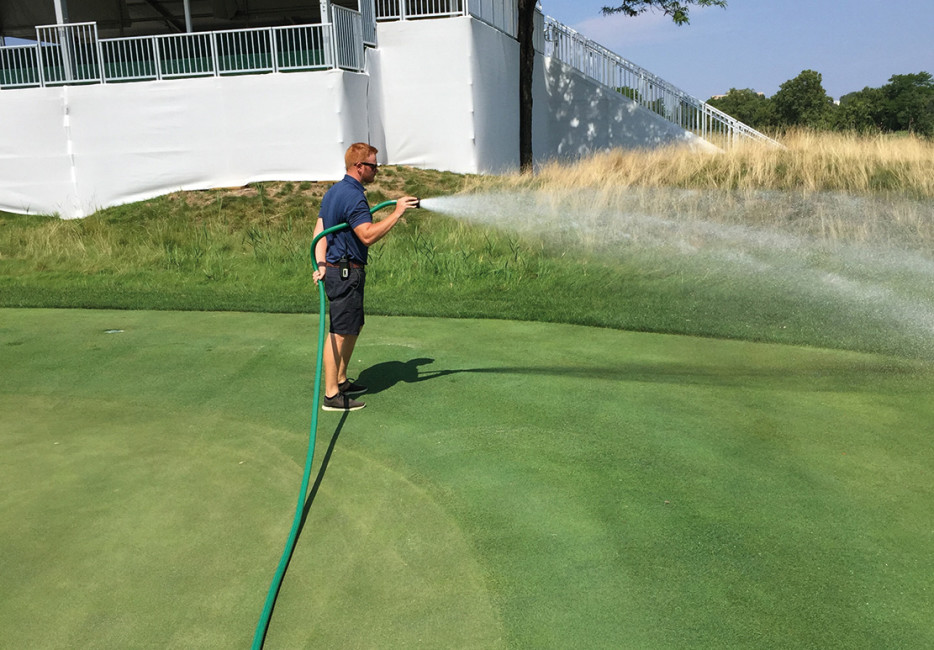 In July, I was fortunate enough to get a place at the PGA Championship held at Baltusrol Golf Club as a volunteer and spent the whole week there.

I was given numerous jobs at the tournament to help prepare the course. It was a great week, and I met a lot of people there from all over the US.

Outside of work was a lot of fun and I had a great time exploring the areas around me. The house that they provide for us is based in Bayonne, New Jersey, and is a short walk to the light rail which gets me to all over the place.

Often, I went to Jersey City or Hoboken to check out the night life and restaurants. The food is so good over here!

Whenever I didn't work at the weekend, I would try to get to New York City with a few other guys I met that were out here on the programme as well.

Towards the end of my first six months, I was feeling ready to move south. It was time to head to Card Sound Golf Club in Key Largo, Florida.

I was excited about this just from what I heard from our second assistant, who had been there the previous winter, so off I flew, thrilled, to Miami!

I struggled to decide what I really needed to pack, as I'd never spent the winter anywhere except the UK, but eventually shorts and t-shirts filled my suitcase. 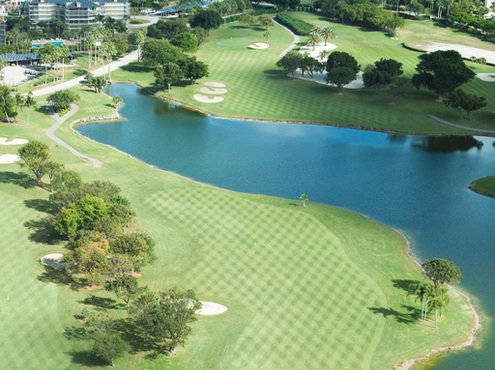 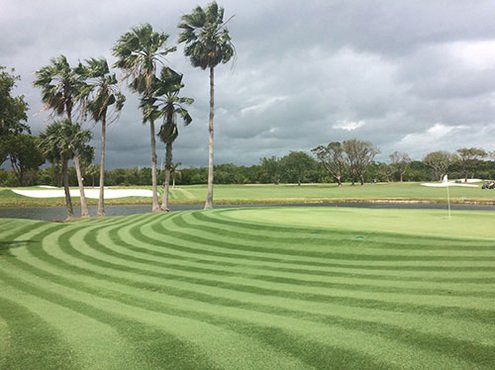 Then, at the other end of the flight, I was picked up by one of the other interns that had been there for the summer. The two-hour drive south to the Keys was tiring, but also had me excited.

I was looking forward to finding out what the other house mates were going to be like, as well as the Superintendent and First Assistant.

During my first few weeks in Florida, I suddenly realised that, no matter where you go, you will be thrown in at the deep end, no matter your capability.

I was Spray-hawking three times a week, cutting greens and watering pretty much every day, which isn't surprising, as the temperatures were in the mid-30s.

Card Sound is where I really understood hand watering. I learned why it was necessary, how to do it effectively, and how to use a moisture meter to understand the required percentages.

The island of Key Largo was a very chilled-out place, and the guys I worked with were outgoing and up for looking around and being active, which was great after the isolated city life.

We quickly got to know some people who had boats, and I went out on boat trips with them. The sights were unbelievable - we even experienced watching the sunset from out at sea.

As Key Largo is only about 500 yards wide, being happy on boats is essential. If you get seasick or don't eat seafood, it probably isn't for you. Overall,

it was an amazing experience and I highly recommend a visit. 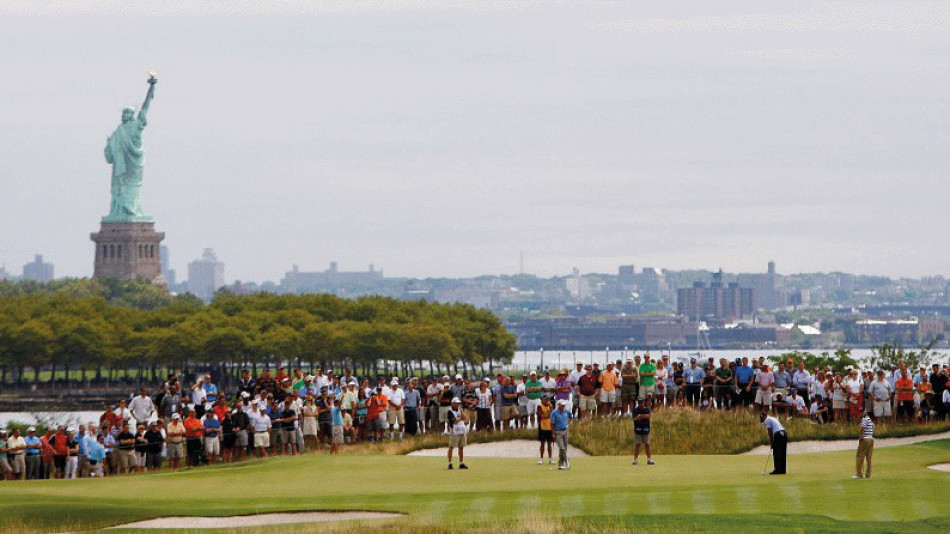 Then came the most important part in my internship. It was time to work through my final six-to-seven months back at Liberty National, preparing for the Presidents Cup.

Unfortunately for me, enjoying the heatwave was over. Instead, I would have to contend with near-freezing temperatures.

I was back in New Jersey on March 13th, reacquainting myself with all the staff I'd worked with in 2016, and introducing myself to the two new ones.

One was an AIT (Assistant-in-Training) from New Jersey who went to Rutgers College. He had won top ratings in his class for plant and weed identification. I had already met him briefly during my first stint, before I had left for Key Largo.

The other was an Australian who had won an award for Australia's Apprentice of the Year 2016. Later, in April, another Aussie joined us. He had been working at two of the best courses in the UK, Royal Wimbledon and The Old Course at St. Andrews. 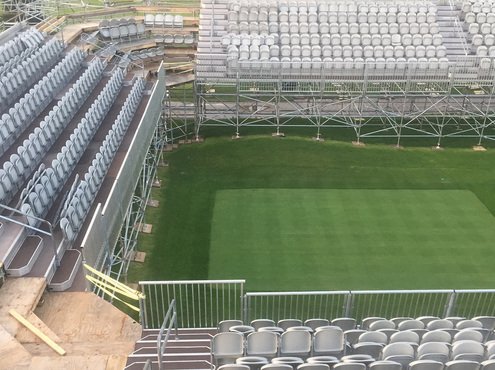 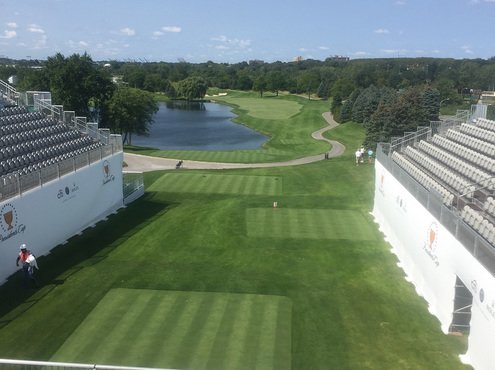 Straightaway, I felt good about having such a strong team on the course and was excited about this season preparing for The Presidents Cup. But, I had been there for just two days when a snow storm hit us and planted about a foot of snow.

Because of the storm, it was a slow start to the season. The course was closed until April 1st, so we didn't get to do much on the course other than shovelling snow from the grass and public walkways.

We were supposed to solid-tine all the playing areas like tees, fairways, greens and approaches at this point, but the snow stopped us from doing so, and we waited a couple of weeks for the snow to thaw out.

Then, we could cut everything, we repainted the outside furniture from the clubhouse, halfway house etc., and did some oil changes and filter changes on the machinery.

It was soon time to start getting the tee markers, flag sticks, bunker rakes, trash cans and coolers out on the course ready for the Presidents Cup opening day, and to start getting everything cut and burnt in.

We were a couple of weeks behind where we wanted to be with aerating and topdressing, but still got it done with some time to spare.

Finally, we could then get into a routine. This year, I was told to focus on boom spraying, which I got the hang of quickly, but was not perfect on, as I had never done it before.

A few weeks went by and boss Greg was a lot happier with my work on the boom sprayer, so I became a full-time sprayer for the fairways and rough.

At Liberty National, we plug out poa on the greens, and this was my job for a few weeks. There was so much on some of the greens, it could be hard work. But, when Greg was happy that a large amount of it had been plugged, I moved on. 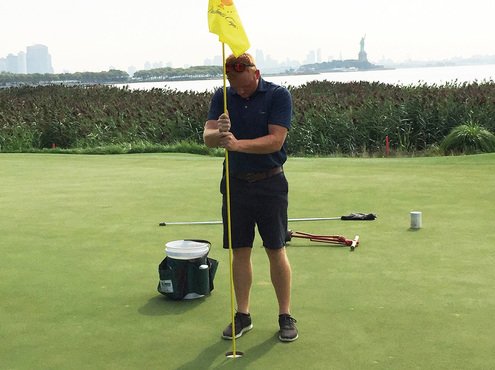 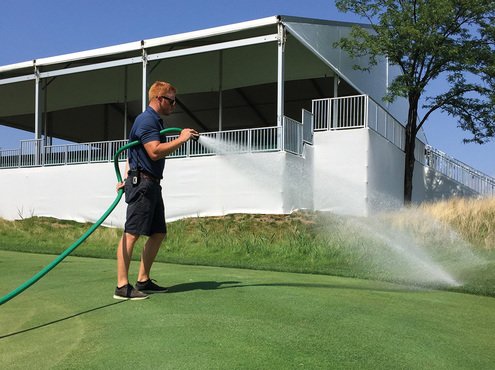 I started plugging some bare patches on the tees with another intern, and were at this hard for a month or so. We were sure that, when the tournament came around, we would be ready.

A month before the tournament, there were already grandstands, huge tents and TV towers and, about a week before, there were also boards surrounding the tees.

As I write this, everything is coming together and looking amazing. I'm able to fully appreciate the value of all that hard work and time learning the ways of Liberty National Golf Club. A few weeks ago, I thought I was ready. Now, I know I am. Indeed, we all are.

Now, we're just watering and making sure we know where we are at with the moisture percentage… and, of course, still plugging!
The greenkeeper

After my internship, I'm not completely sure what I want to do, but I do know it's a job somewhere within this industry. I would like to work on a golf course.

Maybe I can even kick my career up a notch and become an Assistant Head sometime soon - who knows?