Nestled under the escarpment face of Knockagh Hill on the outskirts of Belfast lies Greenisland Golf Club, which is one of the most historic golfing venues in Northern Ireland. 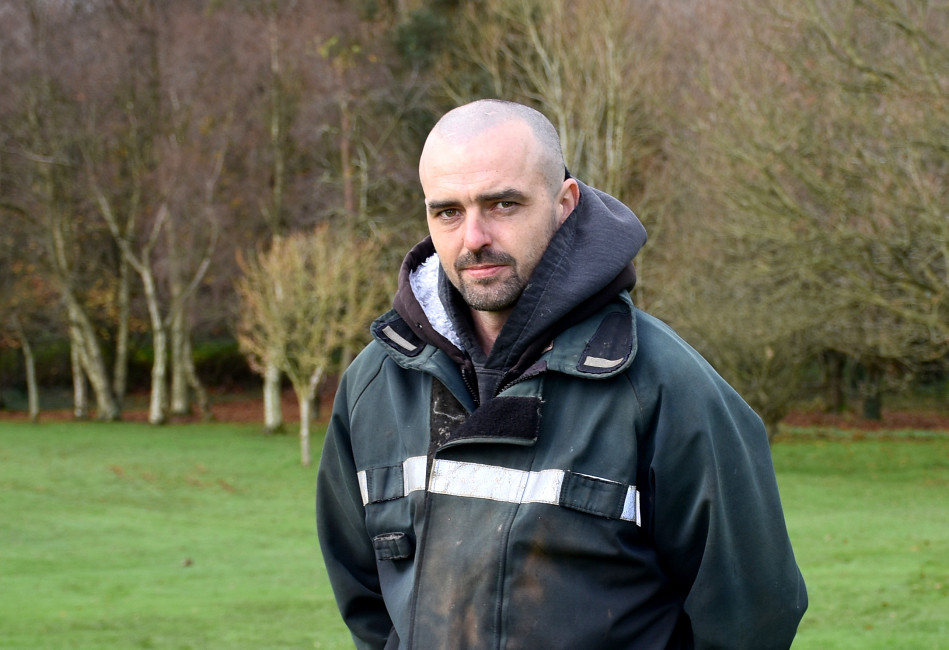 When the popularity of the sport took off in the country during the late 1800s, Greenisland Golf Club was later formed by a group of like-thinking men in 1894 in the very same spot the club occupies today.

Naturally, since that time, the club and course has undergone a few changes and there have been a number of characters that came and went, making a name for the club.

Like at every other club, the Covid-19 pandemic has certainly affected the playing schedule at the club, but the job of maintaining the course is still very much an important one, players or no players.

Greenisland Golf Club hosts a nine hole parkland type course with a practice area stretching to 6,000 yards. Tight tree-lined fairways, water, sand and slopes all play a part in making this Par 71 course a challenge for all levels.

The club sits in a 100 acre site, but around 65 acres are unusable due to the extreme elevation that it lies on. When playing or working the course, on a clear day it is possible to see Scotland, across County Down and beyond Belfast to the Mountains of Mourne. 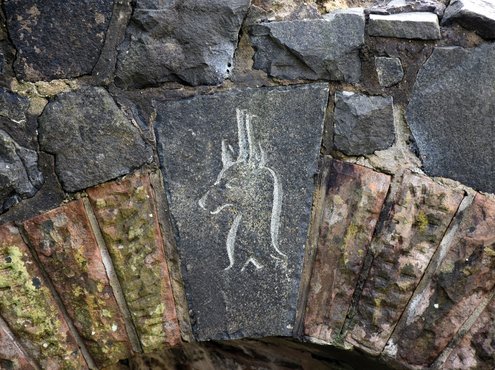 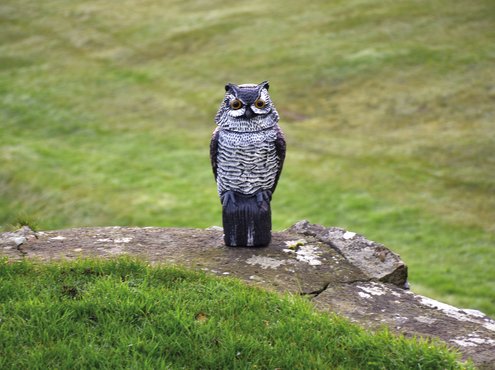 Today, the man in charge of keeping the greens in tip top shape is Head Greenkeeper Mark Middleton who has worked at the club for the past twenty years.

Mark's entry into the industry came after he noticed a job advertised in the local media for someone to help out on the golf course and he decided to go for it.

He said: "I saw an ad in the local job market and thought it would be a good industry to get into. Now, some twenty years later, I'm still here."

"I've undertaken a lot of training to keep me abreast of all the skills and regulations required for the job, including the NVQ Level 2 Amenity Horticulture which incorporated sportsturf maintenance. Also the ANCH Level 3 in sportsturf management and the PA1, PA2 and PA6 sprayer courses. I've also attended many other training courses, such as chainsaw use and machinery maintenance."

It's quite a small team that looks after the greens and Mark reports to others who control the purse strings. "I report to the greens convenor who in turn reports to the greens council," said Mark. "We only have two full time staff working at the club, myself and Peter Thompson who has fourteen years of service in the industry."

"We carry out most of the machinery maintenance work ourselves, but anything too major is outsourced and that includes any grinding work required."

"We also have a part time worker who is currently undertaking his NVQ Level 2, whilst a few of the club members help out when they can, as required," he added.

Describing the soil profile at the club, Mark said the ground has about eight inches of loam and then heavy clay beyond that. "The greens are constructed on a stone carpet with drainage running six feet apart, mostly comprising 70/30 sand soil mixture, and are predominantly fescue although we have been introducing some bent varieties and, of course, some annual meadow grass. Some of the tees we have constructed ourselves on a stone carpet and drained where necessary." 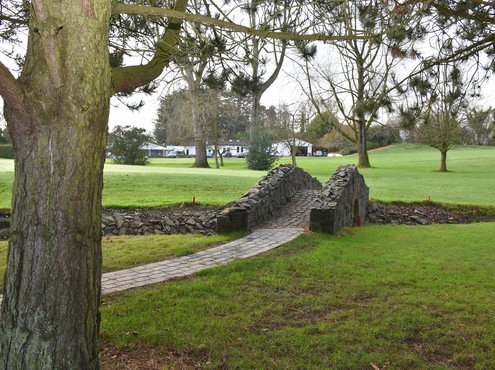 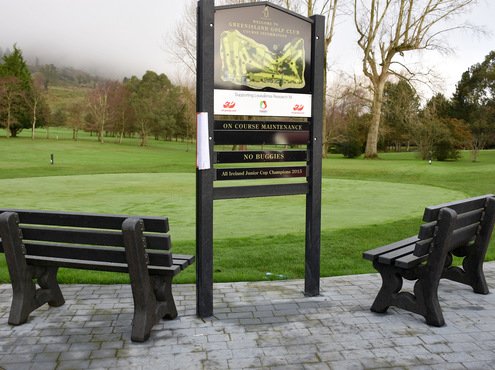 Due to its location at the bottom of a steep hill, the course is prone to some flooding in excessive rain, but the land seems to handle the extra water well.

"We have some drainage on the course, but only on our problem fairways," said Mark. "When required, we irrigate the course using pumps, taking water from the few streams that run though the course, but this can also be problematic during our recent long dry summers when the streams dry up."

"Flooding can be a problem as we are located at the foot of a large hill and any rainfall can take a while to percolate down though the course. In order to combat this, we dig temporary open drains that are only in place through the winter in the most problematic of areas. This seems to work well in directing the water flow," he added.

"One of our newer greens was built to USGA specifications. However, this green seems to give us the most problems with a lot of moss and fertiliser leaching."

"Another green in particular, the ninth, has a micro climate as it is surrounded by trees, meaning the green is almost in constant shade and air flow is a problem. We have removed some trees from around this green to help alleviate the problem. I hope to remove a few more throughout the winter to aid the air flow on the course. There is also a practice facility, which is a fairly small area with one green and bunker for short game practice," said Mark.

The team at Greenisland Golf Club has a fairly comprehensive maintenance programme in place to look after the greens to keep them in good shape no matter what season it is.

"I try and keep the grass on the greens cut to 3mm during the summer months and 5mm during the winter months using the Toro Greensmaster 3250 mower," Mark said.

"We 'thatchaway' the greens on a bi-weekly basis, topdress and then solid tine once a month. If there are any problem areas that surface on the greens, we seed them as they appear to try and keep on top of it." 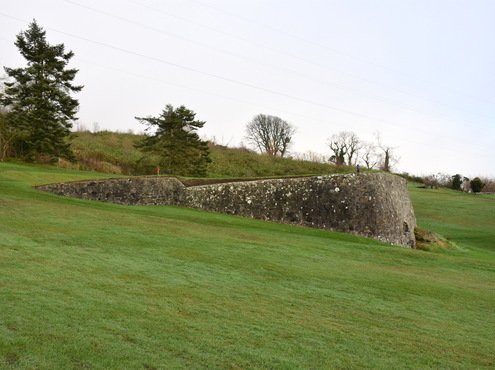 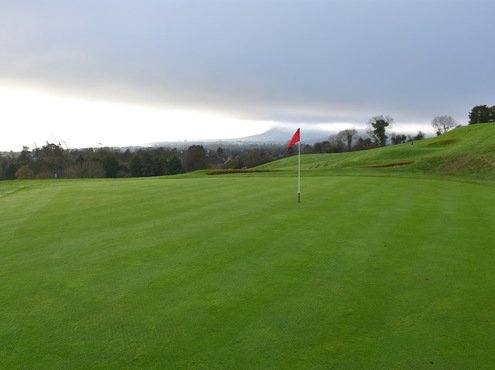 "During the spring, we hollow tine the greens and also have been grading the greens coming into the autumn. Fertiliser is applied as necessary using 14:5:10 during the summer and 6:5:10+Fe during the winter months."

"We were quite lucky with disease last year, only getting a minimal amount, but when it comes we use Agate EW which seems to keep it at bay," said Mark.

"The tees are kept at 10mm using the Toro Greensmaster 3250 and the Jacobsen TR320. Tees are divoted every Monday and fertilised as required."

"Fairways are mowed to 12mm using the Jacobsen Fairway 250. These are scarified once a month during the summer and spiked throughout the winter. We normally would fertilise the fairways with 9:7:7, but last year they didn't need it. The rough is mowed at 35mm using the Jacobsen AR3 and the Kubota BX2350," he said.

Presentation of the course for Mark and Peter ranks very highly and both of them get stuck in to all the jobs, sharing the tasks as much as possible.

At the end of each season, Mark embarks on a number of jobs to help the greens recover from the busy few months of players tackling the course.

Mark said: "I have been 'gradening' the greens the last few years and found it is unmatched for thatch removal, although this can be tough on the greens. I follow up with a light dose of fertiliser or liquid iron to help them recover. We then overseed and topdress, and continue solid tining and topdressing throughout the winter. This year, I plan on renovating some of the tee boxes as some of them need levelled out and some extra drainage added to them." 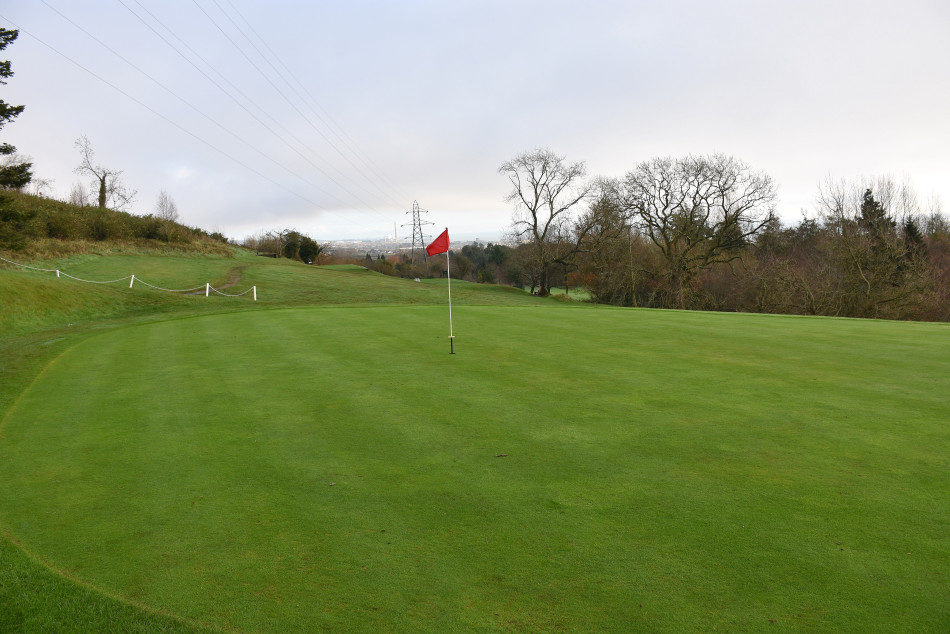 "Renovations are unfortunately affected by budgets. Our budget is always tight and many times we just have to make do with the materials we have to hand to maintain the course," Mark added.

Over the past few years, Northern Ireland has endured its fair share of changing weather patterns which gives greenkeepers and groundcare staff alike some headaches.

For the crew at Greenisland Golf Club, the weather does challenge the number of days players can actually get onto the course.

"The drier summers have definitely been a problem with our limited capacity to water and I can only see the situation getting worse," Mark said. "The wetter winters have meant more closures in the winter months as well. Unfortunately, the last soil samples we had analysed were about five years ago and that's something we need to rectify very soon."

On top of all the regular work, Mark has set up a number of new projects on the course to improve it practically and aesthetically.

All of the bunkers around the course have had the sand replaced and a few of them have been filled in back to the fairway. A new open drain has been installed across the ninth fairway.

"The big hitters were able to drive the green, but now the drain has made them have to play short or risk dropping a shot. We also have a number of flowerbeds around the clubhouse to maintain to make the place pretty," he added. 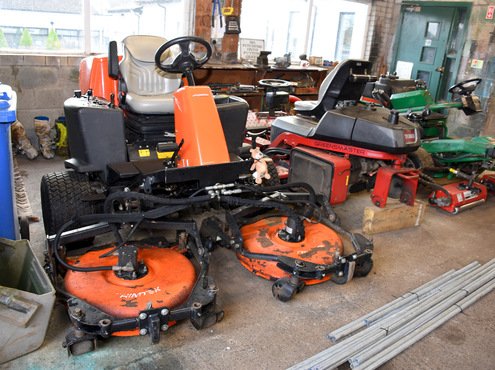 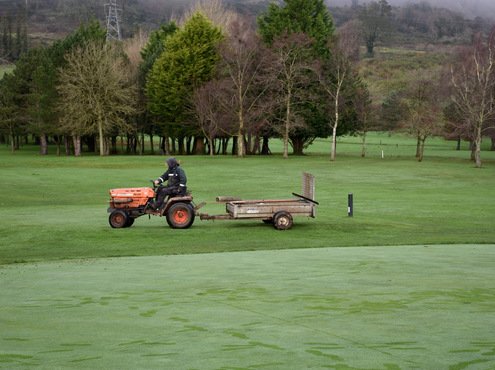 There is a decent range of machinery available to Mark and the other helpers to work the course, representing a number of different brands.

"We have a real mix of machines in the shed, some of which were bought new outright and some that came to us as second hand equipment. We tend to buy where the best deal is but do try to stick to one dealer for the new machinery."

"I'd say one of the best machines we have is the Graden as it seems to do a good job and greatly reduces the organic matter on the greens."

"Also, if there are any specific tasks that we need doing and cannot carry them out ourselves we will bring in outside contractors for that purpose. Just recently, we hired in contractors to add some new drainage on the problem areas of the course."

"If I was allowed a machine of my choice to help out on the course, I would choose a Ventrac tractor as it seems to be a very versatile machine and has a lot of attachments that would be very useful to us," he said.

Greenisland Golf Club also has its fair share of pests and diseases to contend with. Most of the weeds can be treated by using chemicals, but the pests present their own problems.

"Weeds are mostly controlled with chemicals," said Mark. "We mainly have fusarium although, last year, we only had a few light outbreaks." 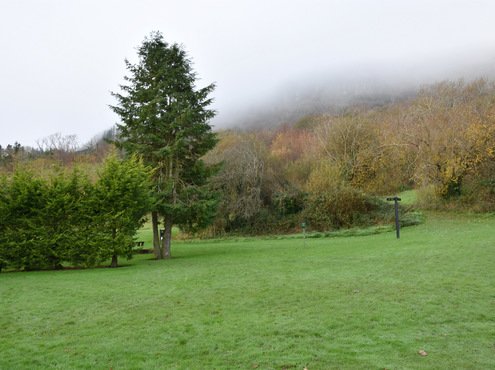 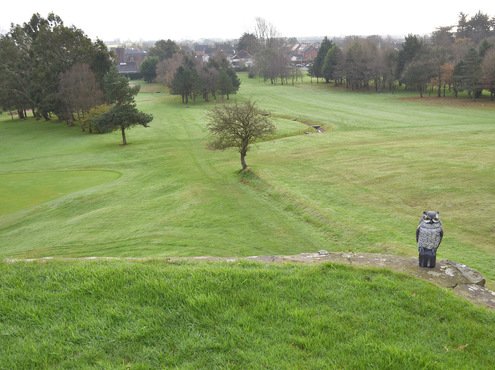 "Badgers are a major problem here and can cause a lot of damage around some of the greens. Foxes are also an issue and seem to like playing in the bunkers. Obviously, it is hard to control these animals as badgers are protected, therefore we just repair the areas on a regular basis."

"The ecology and environment is very important to us so we try to keep the local flora and fauna intact as much as possible. We have a number of bird boxes placed around the course which are always occupied, which is a very good sign," he added.

When it comes to discussing the state of the greenkeeping industry, Mark has his own views about educating golfers.

"I think golf will always be a very popular sport or recreational hobby, but I think golfers could do with a little more education on what we as greenkeepers are trying to achieve. I find golfers are very critical about operations being done on the course, yet with very little understanding of the science and why it is being carried out in the first place."

"If you take a look at any greenkeepers forum, you will read many thoughts about our industry. I feel greenkeepers in general are underpaid in comparison with other professional trades and are frustrated by restraint brought about by councils who often have no background in sports turf management or turf maintenance."

"More needs to be done to educate others on what we are trying to achieve on the courses. I think BIGGA could also help raise our profiles," he concluded.