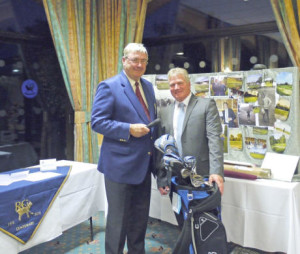 A GREEN-FINGERED golfer has stepped down as head greenkeeper of Redditch Golf Club after 51 years.

But Phil Thornton has not stayed away for very long as he is now looking after the garden areas surrounding the clubhouse while Karl Williams takes over his old role.

During a testimonial day held at the Lower Grinsty Lane club, Phil was made an honorary member of the club and presented with a new set of clubs.

Club captain Phil Guise said: "To record 51 years in any job, let alone the same one, is pretty incredible these days and we owe a huge debt of gratitude to Phil for over five decades of hard work."

To see the article from the Redditch Standard click here.