The team from Greenkeeping magazine celebrated the publication's 2nd birthday at BTME with a drinks reception for it's many advertisers, supporters and friends. 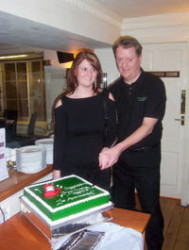 The brainchild of publisher Phil Evans, Greenkeeping was launched as the 'independent voice' for the industry at the show in 2002.

Each bi-monthly edition contains a wealth of product information and topical articles, each with a reader enquiry number, so that readers can request additional information about a product or service. It's current issue, consisting some 56 pages, is its biggest ever and further growth is anticipated during 2004.


As a first time exhibitor, Greenkeeping Magazine enjoyed a fabulous BTME. "The foot flow in Hall Q was substantial throughout the first two days and more than adequate on day three" commented Phil. "Despite previous rumblings about the frequency of the event, there can be no doubt that the 2004 show has quashed this feeling amongst many exhibitors and it may be that the Saltex show comes under added scrutiny because of this."