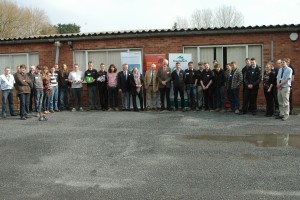 GreenMech were hosts to this year's Institution of Agricultural Engineers' (IAgrE) Young Engineers Competition. Engineering apprentices and students of all disciplines at land based colleges, sixth forms and technical colleges nationwide converged at their manufacturing facility in Kings Coughton, Warwickshire.

The aim of the competition was to raise awareness amongst young engineers as to the width and vibrancy of the industry. The competitors were provided with a set of standard wheels, a battery and maximum dimensions and given the challenge to create a remote or radio controlled vehicle which reached the highest point on a curved ramp. To add to GreenMech's successful hosting of the event, their own apprentice William Baker from Warwickshire College finished a close second overall just missing out to a team from Easton & Otley College. GreenMech Managing Director Jonathan Turner spent a lot of time helping the students and talking to them through the factory tour. "It was been a great day." he said, "The level of competition was very high and it was brilliant to see our own apprentice William coming a close second.

Congratulations to all involved." Following the challenge, the students were taken on a tour of the GreenMech facility to see wood chippers being made.