by Scott MacCallum
in Consultancy
on 04 Dec 2015

Golf Course Consultant Greg Evans MG has built a strong following for his unique approach to golf course agronomy in recent years but the skills he has developed to ensure high quality, all year around putting surfaces has now been transferred to a sport with completely different demands altogether - rugby union. 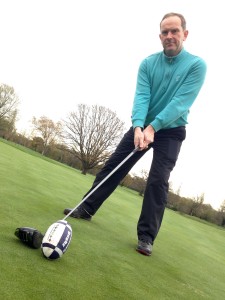 Aviva Premiership Club, Wasps, wanted to improve the quality of their training pitch, in Acton and so First Team Manager, Kevin Harman, contacted Greg to ask if he could oversee its renovation and on-going maintenance for a year, prior to the club moving its entire operation from London to Coventry. Wasps have recently started to play their home games at the 32,600 seater Ricoh Arena In the city.

"I was delighted to be asked to become involved by Kevin and believed that my knowledge and expertise would be able to produce the type of playing surface that could cope with the huge athletes the modern day rugby player has become," said Greg, who plays off a 1 golfing handicap.

"The grow-in took a total of 12 weeks. Ecosolve stripped off the top of the old surface with a Koro Rotovate and we then seeded with Rye grass. We used regular applications of nitrogen-based granular fertiliser, combined with foliar feeding," explained Greg, who has grown his advisory service from his base at Ealing Golf Club, in West London, where he developed his brand of turf maintenance, to the extent that he is now one of the most successful and talked about turf professionals in the country.

"Since then Martin Williams, from Complete Weed Control, has sprayed the pitch with nitrogen, iron and the growth suppressant Trinexapac-Ethyl on a fortnightly basis, while local sportsturf contractor, Adam Rowlands, has rolled, brushed and marked out the pitch prior to training sessions," he explained.

"The foundations for a successful season are built on the training pitch so it needs to be of the highest possible quality. The work that Greg Evans has done, together with the other contractors who worked on the pitch, has ensured that our players have had the best possible conditions in which to prepare for this very important season," said Kevin Harman.

While golf will always remain the foundation of Greg's consultancy business the fact that he has shown that his knowledge can be transferred to other sports opens the door to an expansion of his advisory company.

"I was delighted to be able to help Wasps with their training pitch and now know that if I can produce playing surfaces for a sport as demanding on turf as rugby union there are many more sports in which I can assist with the quality of playing conditions."

For further information visit www.gregevansmg.co.uk or contact Greg himself on 07951 157208.