Council groundsman Mahadev Thapa takes such pride in his work he's built flower beds for Brecon's Cradoc Road Cemetery in his own time. 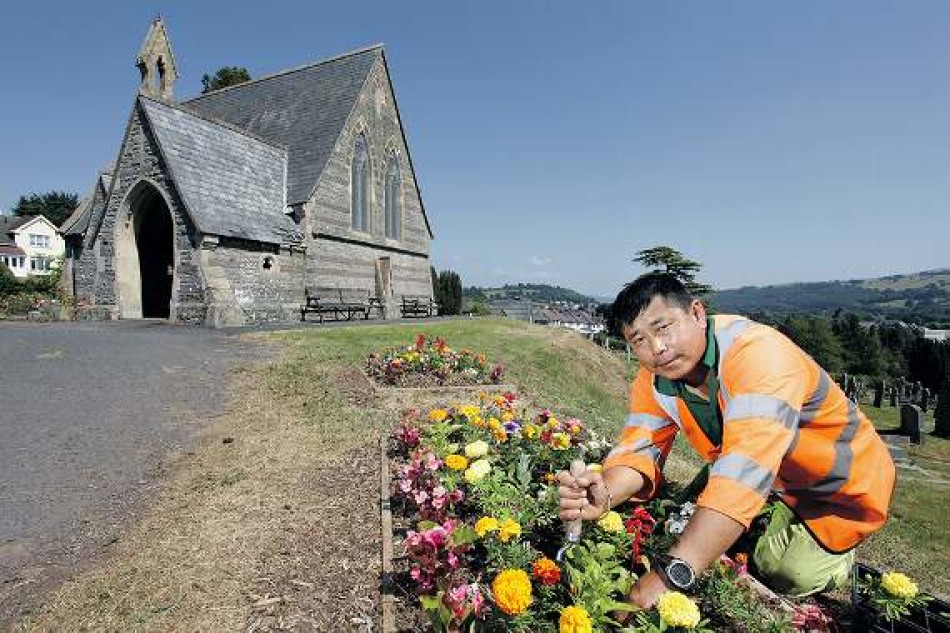 The green-fingered former Gurkha soldier has made wooden borders for the flower beds at the cemetery and also cares for and waters the plants every day outside of his working hours.

The 56-year-old has worked for Powys council since 2007 but has only recently returned to working at the cemetery, among his other duties which include looking after the town centre streets, after the council awarded a grounds maintenance contract to private firm Greenfingers.

"I made the boxes in my own time," said Mahadev: "They will make it easier for next year.

'It took two days to make the seven boxes and plant them and I finished on Monday."

Mahadev took a job with the council after moving to Brecon in 2007 following 15 years service, from 1980 to 1995 as a Queen's Gurkha Engineer in the British Army's Gurkha Regiment, and then a further nine years in the Brunei Government's Gurkha Reserve Unit.

Trevor Tame, a supervisor with the council's Highways, Grounds and Street Scene service, praised Mahadev for going above and beyond what is expected of him.

He said: "Mahadev just takes pleasure in making the flower beds easier to maintain and is one of those people who just takes pride in what he does.

"We've had a couple of emails come back to the office to say how well the cemetery is looking since it came back (to the service) and since Mahadev came back on board.

"He is just one of those guys that likes to give that little extra."

During his service with the British Army Mahadev only came to Powys once, in 1991, for a hang-gliding course at Crickhowell, but he and wife Hari Maya visited Brecon in 2006 as daughter Salina was living with her husband, Min Bahadur Thapa, who was stationed in the town while serving with the Gurkhas.

A former chairman of the Brecon Nepalese Society the grandfather of two believes his was the second Nepalese family to settle in Brecon, having done so before veterans won the automatic right to remain in the UK in 2008.

Son Bhuwan, who is also known as Saab, used to play football for Brecon Corries and is currently serving with the Royal Engineers.