Gullane Golf Club in Scotland has chosen Toro as it works towards accreditation for its Golf Environmental Organisation (GEO) certification. 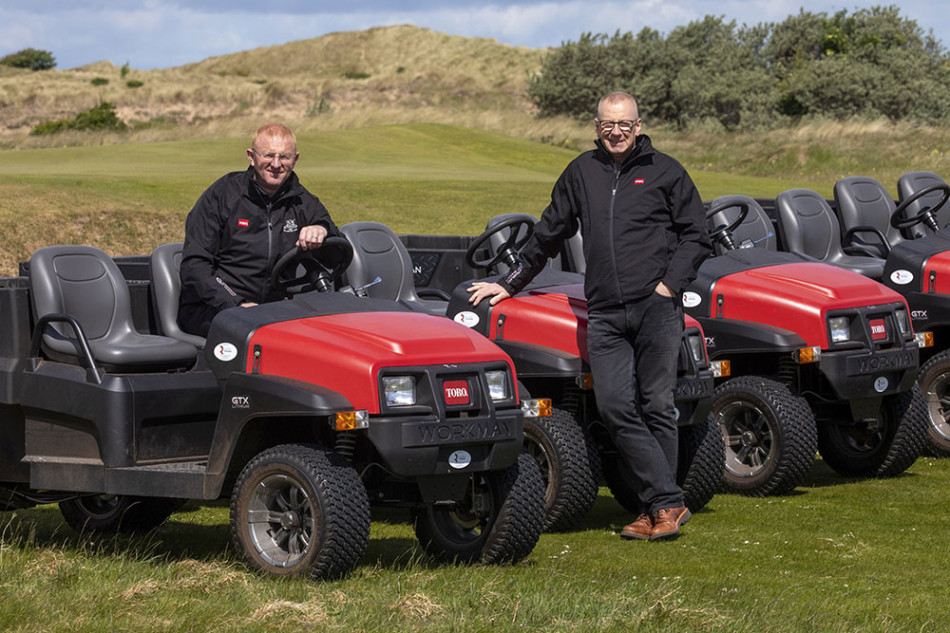 Choosing five Workman GTX Lithium-Ion utility vehicles and two all-electric Greensmaster eTriFlex 3370 riding greensmowers to make a positive ecological and environmental impact, these new machines form another part of the club's existing 10-year deal with Reesink Turfcare Scotland and the Toro brand - bringing the partnership to a quarter of a century.

Stewart Duff, course manager since 2006, explains: "We consistently do our best to make the course a better place and are working towards GEO Certification. One of the environmental and social responsibility factors considered is the amount of petrol and diesel machines used and we're trying to reduce that as much as possible.

"We didn't want to see the older buggies we had previously go, as they were excellent, but once we saw the new ones with the lithium batteries, we were sold," Stewart continues. "They're a big step up: they have more ground clearance and the new lithium-ion technology means the batteries don't need topping off with distilled water once per week or to be replaced every couple of years like the conventional lead-acid ones, which is incredibly convenient.

"The fact that they're environmentally friendly plus the savings made on fuel and reduced servicing cost, as well as the no noise pollution, ticked all the boxes for us. They've quickly become a firm favourite."

The Workman GTX Lithium-Ion utility vehicle is all-electric and the largest lithium-ion model in its class. It also played a big role in Toro's journey towards electric power, something the brand has been working towards for over 20 years, alongside the Greensmaster eTriFlex 3370, the first all-electric riding greensmower on the market, of which the club has ordered two.

Stewart says: "We ordered two eTriFlexes, one which we'll get in August and another in January. Not only do they come with all the electric power benefits, but the fact that you can interchange different units quickly and easily with no spanners required, is another fantastic selling point."

"I look forward to seeing what else Toro has in store when it comes to electric machines as we have been impressed with what has been launched already. It's exciting to watch the next technological advancements emerge in this sector."