by Greg Rhodes
in Multi-sports venues, Cricket, and Bowls
on 21 Mar 2022

Malcolm Eckton spent a good slice of his working life lecturing at Myerscough College. Clearly, he couldn't keep away from the education hub, returning twice after first leaving, before eventually taking redundancy from full-time education four years ago. 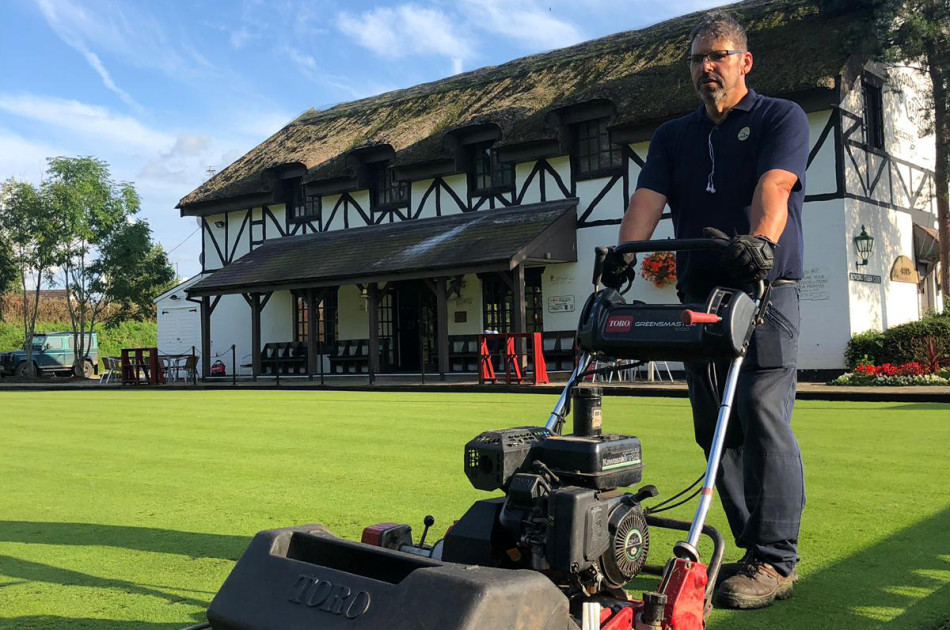 Qualified as an agricultural engineer, Malcolm spanned the globe on work exchange programmes through the University of Minnesota between his stints at the College.

Now 61, he's in charge of developing the sporting and amenity provision to a new level at one of Lancashire's hidden gems of leisure, hospitality and hotel provision - Guy's Thatched Hamlet.

Nestled between the Lancaster canal and the busy A6, the Hamlet has plenty to catch and keep road or waterway travellers and tourists with its restaurant, pub, lodge, bowling green and cricket field.

A local community focus as good as its name, the cluster of thatched buildings presents a unique mix of provision whose owners are ready and eager to move out of the shadow of Covid lockdowns and restrictions that forced a five-month long closure.

On contract to Guy's five days a week, Malcolm reports to the Wilkinson family owners, Sean, Kirk and Emma, on all aspects of grounds maintenance. "After seventeen years teaching aspiring grounds professionals - no fewer than five of Manchester City's maintenance team trained under him - I thought it was time I gave something back to the industry by putting theory into practice," he explains.

He'd started out as a mechanisation student himself in 1977 at Myerscough, eventually gaining his HND in agricultural engineering from Rycotewood College in Thame.

"Fate drew me to horticultural equipment, delving deeper into fine turf machinery management. I look on it as an art form," he proclaims. 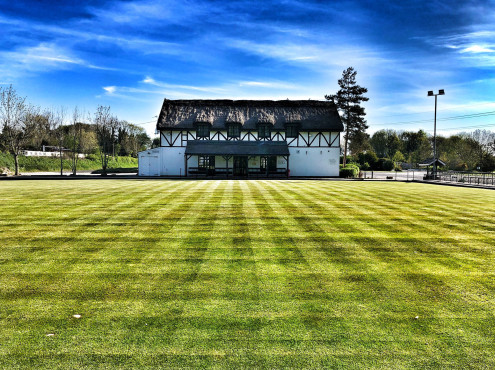 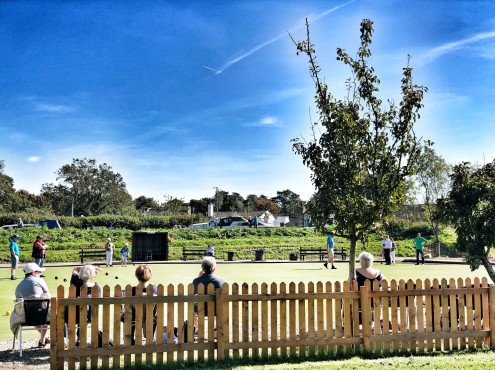 Matching his aspirations to the owners, who, as Malcolm notes, "are happy to invest in what's needed to bring the grounds up to a high standard. We have a collaborative relationship," adding: There are so many sources of advice, many former students I consult before investing in materials, machinery or turf treatments."

The canalside cricket ground, with its all weather wicket and distinctive thatched pavilion, is home to Guy's' Boddington's Village Cricket League Teams.

Founded in 1994, the two teams play on Wednesday evening during the summer, competing against local rivals. Cricket packages are available and enjoyed throughout the summer months.

"Cricket is taking more of a back seat to outdoor events," Malcolm discloses, "everything from the Bubble and Bounce events to The Oyster Festival, held in the first week of September."

The festival attracts the great and the good from far and wide, he adds, with tickets for the prestigious event selling out a year in advance - an insight into its popularity. "It's been going donkeys years [well, about twenty-eight] and attracts hundreds," Malcolm adds.

Then in "normal times" there's the gin and cider festivals, with their marquees and intense footfalls that perhaps only serve to emphasise that Malcolm's literally on a losing wicket in striving to develop the game here.

"Fewer people want to play now," he laments. The near demise of cricket at Guy's must hurt Malcolm, an avid batter in his heyday and winner of the Players' Player of the Year accolade for local Boddington's Village Cricket League.

"I notched up a few hundreds in my time," he says proudly, "including 135 not out against Grimsargh, but this season we're planning to host just eight games."

"There's nothing better than enjoying a day bowling next to the Lancaster canal," states Guy's website, and that experience will be peaking this spring for a growing tally of players as the 39m by 39m crown green reaches its best ever condition, thanks to Malcolm's sterling efforts.

Hosting teams in the Over Wyre, Longridge Mixed and Preston Floodlit leagues, the green is an increasingly attractive revenue generator for Guy's, given the extensive food, drink and accommodation available next door, with a selection of bowling packages to suit all pockets.

Malcolm shows me photographs of the green he took on when he started at Guy's, then others from last year. The contrast is startling. "At the beginning, the green was pock marked with brown and bare patches - something had to be done, and quickly." 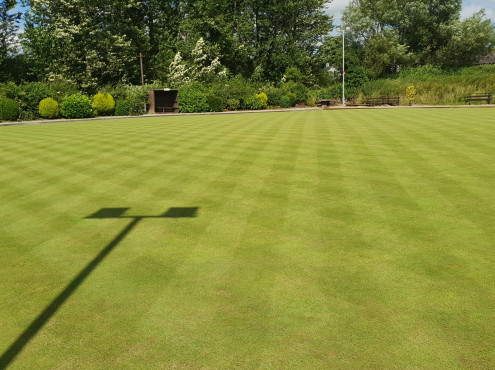 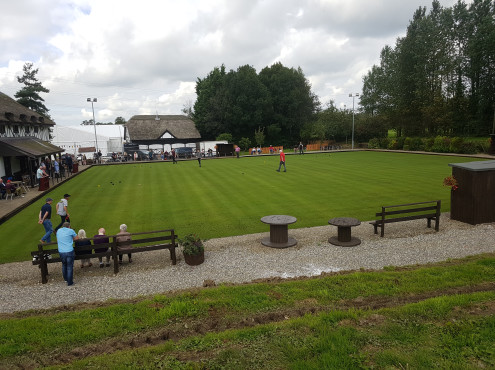 Since coming on board in May 2019, Malcolm has transformed the green into a playing surface worthy of hosting quality bowling. "We hope to reach county standard soon. I still have a few patches to repair - it's not a perfect green yet but we're moving in the right direction."

Before committing to a restoration strategy, Malcolm took advice from agronomists, drawing from his own knowledge to plan the big comeback.

"A major move for me was starting to apply wetting agents to turn the sward from a hydrophobic to hydrophilic environment to bring maximum benefit from fertilising."

With little, if any, means to apply liquids optimally, Malcolm - certified in Safe Use of Pesticides - invested in a couple of Cooper Pegler 20l capacity knapsack sprayers and a 2m, four-nozzle boom attachment giving 4ft spread. "I use one for fertiliser and wetting agent and the other for herbicide," he reports, "to keep the different chemicals separate."

Mowers were in short supply too. "The one in the shed had broken down, so I borrowed a Toro 1000 greens unit from Lancaster Golf Club where I knew the head greenkeeper, Carl Hamlett, from placing students with him in my time at Myerscough."

"It certainly did the trick. Our first run took off twenty boxes of what I call 'fog' that had accumulated over time. But we had to return it." Now Sean is keen to purchase one for Guy's from local dealer, Cheshire Turf. 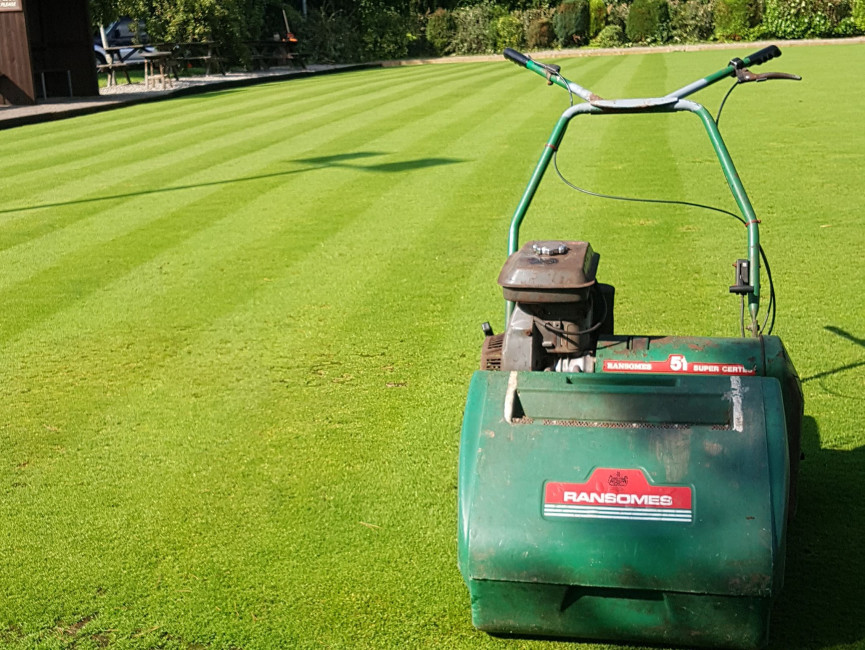 "Fitted with a groomer, which combs the surface, it'd be ideal for maintaining the green going forward. I found the first mower was really sensitive - applying any pressure to the handles changed the cut height, which I want to avoid."

Despite 2021's prolonged dry period, the surface remained "lovely and green"; a shame in one sense as bowlers were unable to enjoy a new-found quality of provision thanks to Covid measures.

With a bit of luck though, that'll all change as the 2022 season rolls out. "I've kept the surface cut to 7-7.5mm over winter, then will drop that to 4mm in summer, mowing before every match - that's up to four times a week," says Malcolm.

"Guy's fields seven teams and touring clubs from the North West, including Barrow and Wigan, play here too, usually in the afternoons, so it'll be a busy schedule."

Compaction had troubled the crown green so a key task for Malcolm in 2021 was to relieve it - and the moss build-up - by purchasing a 20-year-old Ransomes GA30 spiker, then topdressing the surface with a light application of sand.

Communicating with the players was key though, Malcolm explains, as they know what to expect when they venture out. "They like a fast surface, but I had to explain that the road to achieving that was to reduce the quantity of moss and thatch to improve flow across the green. They understood that and Sean was very supportive of what I was doing." 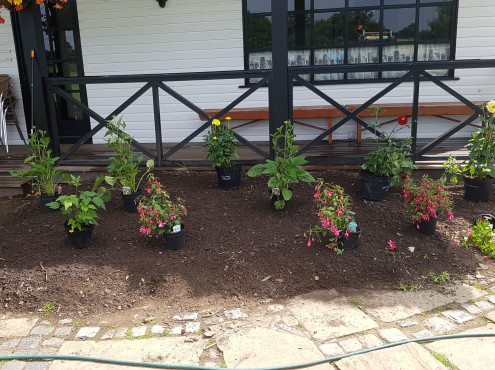 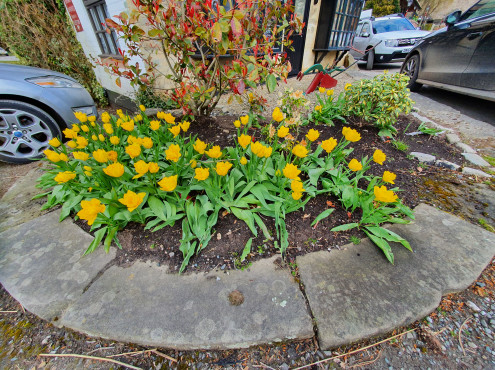 He intends verticutting twice monthly with Malcolm's own SISIS trio rake in the growing season, then hollow tining with the spiker to three inches in September, when bowling wraps up for the year, is further improving both playability and presentation, factors he is only too aware of when it comes to bowler sensibilities.

"I keep listening to what players say about the surface as part of my goal of developing a crown green full of character, by adopting ecologically friendly practices wherever possible, but I do have to keep fusarium outbreaks at bay by spraying twice a year."

Meanwhile, Sean has growth regulators on his mind. "He's always asking about them and we're thinking seriously about using some this year, to help keep the cricket ground turf growth under control."

Cricket has become less popular, accepts Malcolm, who is honorary secretary of The Boddington's Village Cricket League, with only one team taking the field. "Our popular funfair is becoming more of a priority as it attracts plenty of customers," he says. 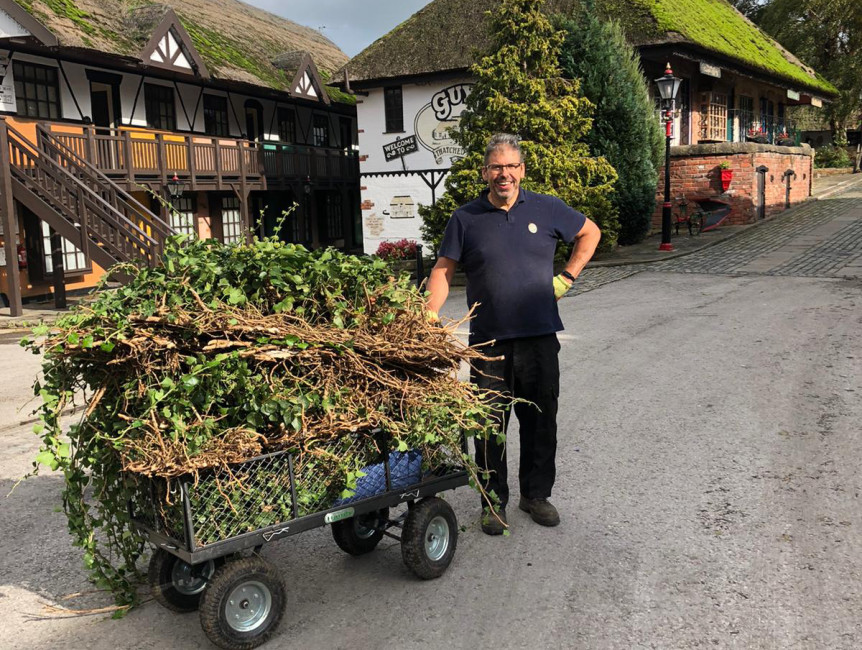 Turfcare forms only part of the story for Malcolm though. "I've inherited the whole site, which includes vast amounts of flowerbeds, and the presentation of the bowling green should be indicative of the standard of quality throughout Guy's."

"But you can only achieve so much single-handed and that means prioritising tasks, moving around the site as the year progresses."

Conifers had outgrown the site and had been felled before Malcolm arrived. However, the stumps stubbornly remained and had to be lifted out to prepare the ground for the plantings to follow. "We managed to remove them using a hired mini digger."

"In autumn 2019, I planted 7,500 snowdrop, crocus, daffodil and tulip bulbs to introduce colourful spring displays," he recalls. "At least Sean was able to enjoy the displays during what was a Covid-ravaged spring 2020."

The hanging baskets adorning the pub, restaurant and lodge add further appeal. "I suppose you could say I've leant another trade since I came here, and applied it in a real world setting," he adds.

And when the festivals come calling, it's all hands to the pump. "We have three of us on maintenance - me on the outside, Salvatore Muzzella handling preparations indoors since Covid - he was mowing before that - and a third helper who does both."

Malcolm attends BTME and remembers well the words of Continue to Learn presenter Stuart Hogg, course manager at Lancaster Golf Club, some years ago. "He said greenkeepers have just three months before club members forget the good work they have done. That means you have always to be trying to deliver the best you can." 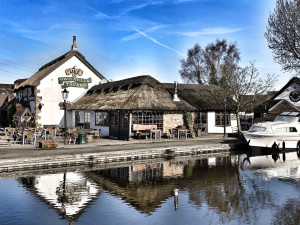 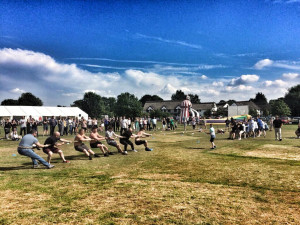 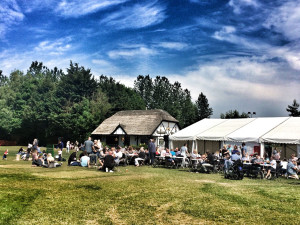 A jewel in the North West's crown

On the lip of some of the UK's most enthralling countryside, the quirkily named Guy's Thatched Hamlet is a gem of leisure, sport, hospitality and food provision.

The origins of the name may still be shrouded in mystery but the quality and scope of its offering is crystal clear.

The venue's position by the bank of the Lancaster canal, which wends from Preston to Kendal through picturesque landscapes, is a delight for visitors and stopover guests, whatever the weather.

The canalside haven of characterful thatched buildings, just off the A6 Garstang Road at Bilsborrow, near Preston, is a longstanding local community hub, also attracting tourists for holiday breaks at the 60-bed lodge - a springboard for ventures into a region resplendent with attractions.

Nearby is the pretty market town of Garstang, close to the river Wyre and romantic ruins of Greenhalgh Castle. Beacon Fell Country Park presents 110 hectares of woodland, moorland and farmland, with the fell rising to 266m above sea level to deliver spectacular views of the Forest of Bowland, Morecambe, and, on a clear day, the Isle of Man.

Blackpool's glitzy glamour and the dramatic scenery of the Lake District National Park are also within easy driving distance to be explored and enjoyed. 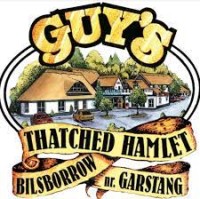 Seven days each season, the Gundogs Golf Society travels far and wide enjoying what the golfing countryside has to offer. "Here in the North West we are blessed with three Open Championship courses and "a huge range of other Championship links, parkland and moorland courses within 45 minutes drive," Malcolm reveals. "You're really spoilt for choice."

Visit www.guysthatchedhamlet.co.uk to learn more about this fascinating focus that offers something for everyone.