by Neville Johnson
in Schools & Colleges, Rugby, and Renovations & New Builds
on 26 Aug 2016

The Haberdashers' Aske's Boys' School, often referred to as HABS, is an independent day school for boys, occupying 104 acres of greenbelt parkland near Elstree in Hertfordshire where it has been since 1961. It's just had a major winter pitch refurbishment. Neville Johnson tells the story

The Haberdashers' Aske's Boys' School was originally founded in 1690, actually as a hospital and school, just north of the City of London by a Royal Charter granted to the Worshipful Company of Haberdashers. A legacy from one Robert Aske, worth over £4 million in today's money, was the initial funding source. The 17th century merchant would surely be impressed by the school's status over 300 years later, since it regularly figures in the country's top twenty schools for academic results, and pleased too with the energy and investment put into its outdoor facilities.

The latest example of the latter, completed ahead of the current school year, was the £750,000 reconstruction of four full-size winter games pitches by Buckinghamshire-based and nationwide main contractor Agripower.

The Grounds Manager at HABS, Mike Kemmett , who has been in the industry for over twenty years with experience at both Merchant Taylors School and Harrow, explained the reasons behind the need for such a project: "The old drainage system with claypot drains put in in the late 1980s was failing and getting worse year by year," he said

"This, and the clay nature of the soil, means there is a lot of ground movement. When it's hot, it dries out and cracks: when it's wet, it swells. Over time, it had become pretty ineffective, difficult to play on and hard to maintain."

"Some gravel drains were put up and down the pitches in the mid nineties, but they weren't carrying away sufficient rainwater, and the drainage lines were getting more and more evident each year."

"We had lived with it for a long time, but it was getting to the stage where we were losing too many games each year because of waterlogged surfaces. We couldn't get out to prepare pitches for play, and the sports staff couldn't get the boys out to play or train. It was a downward spiral that was not going to improve without seriously investing in putting things right." 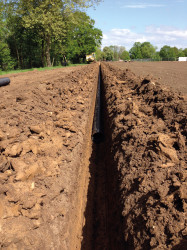 Mike engaged Tim O'Hare and Associates to draw up a specification for what was required to renovate the four pitches. He had a good idea of what he wanted to achieve. It was just a matter of getting a precise plan of the required levels and drainage spacing. The project had the backing of the school's Director of Sport, Ryan McIntosh, and Agripower, with Gary Plummer the on-site project manager, set to work in April a year ago.

The contractor had successfully carried out topdressing and sand spreading of pitches at the school over a number of years, so it had a close knowledge of the ground conditions there. A key credential was its experience of handling big scale projects at places of learning and all that that entails. Eton, Harrow, Birkbeck College and Merchant Taylors, were all on a 30-plus educational establishment CV.

Agripower Director Jerry Anderson summed up the challenge that faced the contractor at HABS. "The four pitches in question were really suffering from poor drainage. The old clay system, with some plastic pipe, was connected to a carrier drain leading off site. It was all very uneven, making for poor playing conditions and issues with effective maintenance," he said.

"The design drawn up for the project meant a full topsoil strip, regrading of the formation, working generally to existing gradients and topsoil replacement with sand amelioration to aid general drainage. The proposed drainage scheme was based on a lateral system spaced at 4-metre centres with sand banding as a secondary means of water exit. The secondary drainage was later uplifted to the installation of topdrain slits."

"Part of the field had to be used for summer term cricket, so the work had to be phased. Topsoil stripping commenced in the April to pitches 1 and 2, with seeding completing the phase in June 2015. Phase two, on pitches 3 and 4, commenced in June and was completed in August. In all, we used over 2000 tonnes of fresh topsoil." 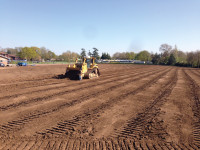 "The remodelling of the levels was undertaken using a CAT D6K dozer, fitted with a 3D modelling system which allows the operator to work to an electronic plan shown on an in-cab screen," said Jerry.

"Mostly working in manual mode, the system is switched to auto when within 100-150mm of finished levels, at which time the hydraulics controlling the blade movement are carried out by the system. Positioning is controlled with an EDM total station, which is referenced to control points established by Agripower's engineer/surveyor."

The contractor did encounter one or two 'obstacles' during the reconstruction of the four pitches. "The main electricity supply to the school traversed diagonally across the site under three of the four pitches and the main gas supply crosses underneath pitch 1," said Jerry Anderson.

"Both were mapped by CAT scanner and then proof-dug to confirm depth and position. Once exposed, they were also recorded using OS coordinates to provide a permanent record of location."

An irrigation system with manual take-off points was also part of the project. All of the pipework for this, as well as provision of a serving borehole, was in place before the drainage work began. This aspect of the project was in the hands of Leicestershire-based designer and engineer, Paul S Graham.

Storage for pitch irrigation is provided by a 96 cubic metre circular tank, and water is pump-fed to the take-off points with a pressure sufficient to run Speedy Rain 505 travelling sprinklers. These have 140 metres of 50mm pipe, capable of distributing up to a 40 metre wetted width down the length of the pitch in approximately four hours.

An unexpected bonus to the school was that the water from the new pitch irrigation borehole was of such good quality it could be used for back-washing of a new school swimming pool, part of a multi-million pound sports centre scheme completed last summer. A 700-metre piped extension made this possible.

The pitches' new grass was sprayed with Primo Maxx as a leaf retardant six weeks after sowing to divert the growth energy to root development and creating a stronger sward. After ten weeks, roots were measured to be down 150mm and this went a long way to minimising surface tearing when the first match was played on 19th September. Once established, early leaf growth was so vigorous that the HABS grounds team was hand cutting all four pitches until the end of October. 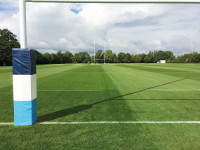 "The essential requirement of the new pitch project was to attain rapid establishment in time for the start of the new season and this was comfortably achieved," said Mike Kemmett.

"The whole job went to plan and reaction after the first full season with the four new pitches has been great, from staff, pupils, and visiting teams."

During the first season of winter games - rugby in the autumn term and football after the Christmas break - verti-draining and weekly slitting have been valuable routines to supplement the major upgrade. The new pitches have held up well to the rigours of almost daily use.
The HABS pitch project, you could say, was 'planning and management in perfect flight'.

Following on from the successful relationship and further negotiations with HABS, Agripower secured the contract for the refurbishment of two new artificial pitches at the school, starting this summer.