0 Harrod UK Nets a Snip for Barcelona at Wembley Stadium 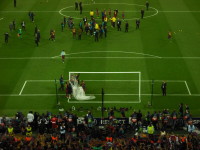 Holding the Champions League Trophy aloft Barcelona were euphoric in their win at Wembley Stadium on Saturday, but centre-back Gerard Pique had his eye on another type of trophy altogether and wasn't leaving without it - a Harrod UK goal net, snipped right from the post!

Instigated by Pique, the net was cut from the goal post as Barcelona celebrated their 3-1 victory over Manchester United. If only the players had looked a little closer they would have noticed the twistable net hooks and could have foregone the scissors…

Sales & Marketing Manager Kevin Utton commented "I was watching the match and couldn't believe my eyes when a pair of scissors appeared! It's fantastic to think that a football net from our factory in Lowestoft is now heading to Spain as the prized possession of Barcelona as a memento of their victory. Maybe they wanted to compete with rivals Real Madrid, who use our goals and nets at the Bernabéu; following Saturday's raid, the Nou Camp can now boast to also owning a Harrod net!"

The Suffolk-based company had recently renewed the supplier agreement with Wembley Stadium to continue to supply their goal posts and nets. After Saturday's shenanigans, it looks like another net will be en route to Wembley very soon!

Image: The net is cut from the post before being paraded round the pitch by a jubilant Barcelona.