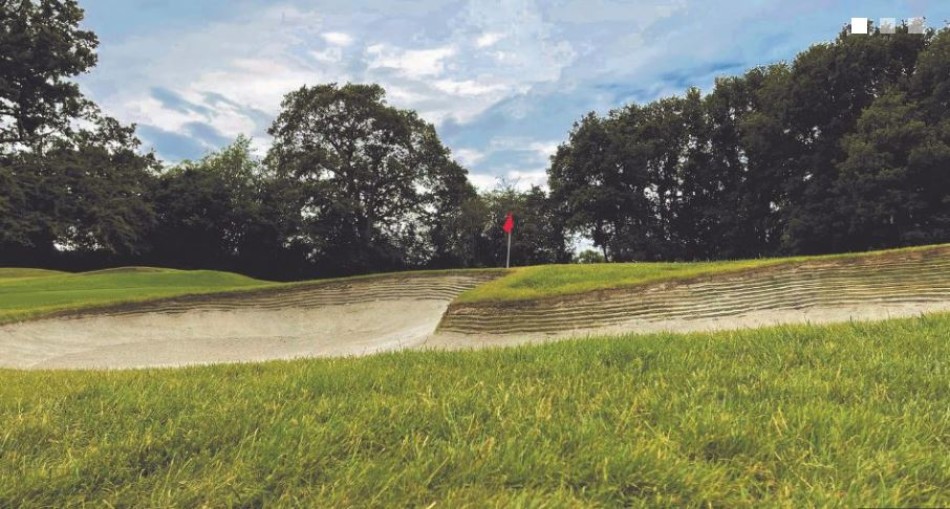 "Hartsbourne knew that the quality of its bunkers, and the excessive maintenance burden, needed to be addressed," said Richard Allen, founder of EcoBunker. "A bunker audit and preliminary design had been completed a few years ago by a leading architect, and this provided detailed recommendations for improvements."

In September 2020, the club brought in EcoBunker to deliver the architect's vision. Representatives from the club visited The Army Golf Club in Hampshire where course manager Phil Wentworth demonstrated the results achieved with EcoBunker's automatic bunker edge dripline system, which makes it easier to maintain the bunker edges.

"We agreed to do a phase one project on two holes, the eighth and ninth, which together have ten bunkers," said Darren Clewes, EcoBunker's head of sales. "Our team, guided by former Walker Cup player and greenkeeper Llewellyn Matthews, started on site on 30 November, and during the work we added two more bunkers on the second hole."

Allen said: "After immediately recognising the merits of the bunker designs, and following excellent feedback from golfers, phase two began in spring 2021 when all the front nine was completed. The back nine was then completed in phase three during the winter of 2021-2022."

EcoBunker was assisted with shaping by regular partner Andy Greenslade of AMG Construction.

"Our solutions delivered sharp cut, distinct edges, varying in height between 100 and 400 millimetres, creating irregular shapes whilst ensuring that close mowing could be easily and safely undertaken right up to the bunker edges," said Allen. "It was important to maintain that sharp-edge look, especially when some bunkers were cut in very close to the green edge, creating some very interesting approaches and challenging hole locations."

"From an aesthetic point of view, the sharp edges give the bunkers more impact, helping them to stand out in what is quite an expansive tract of parkland. Furthermore, the shadows cast by the deeper edges create some alluring effects."

"With respect to maintenance, the benefits are significant: sand contamination through the edges - always an underestimated problem in the golf industry - is virtually eliminated," continued Allen. "The pronounced lips are also designed to deflect surface water around bunkers, reducing washouts, and the sand faces which used to be set at over 30 degrees, requiring regular and time-consuming sand replacement, were reduced slightly, thanks to the deeper edge, creating a far more sustainable sand angle in the region of 25 to 28 degrees."

Simon Watkins, course manager at Hartsbourne, is already seeing the benefits of EcoBunker's work. "For many years, our regular bunker preparation work was intensive, but I now have clear evidence that the EcoBunkers only require the attention of one man whereas previously we needed four men to deliver the same quality," he said. "The saving in man hours has been incredible."

Allen says that this inland parkland style layout was very much in his mind when he first began creating bunker solutions. "Our solutions work so well on parkland courses and with lower edge bunkers because of a combination of factors, and perhaps prominent among those are golfer expectations of what parkland golf should be like, and the local soil conditions and topography which impact heavily on the maintenance burden," he said. "From an aesthetic point of view, most golfers expect a more manicured presentation than say on a links or heathland course where less maintained, more rugged bunkers are more acceptable, and often more desirable too."

"The EcoBunker system is designed to make it easier to maintain the clean cut edges desired in parkland golf, and to deliver a fully sealed system ideal for combating typical parkland soils which can be heavy, clayey or stony. In the fully sealed system, such as the one delivered at Hartsbourne, the sand remains cleaner for longer, and drainage functions more effectively for longer too. Golfers enjoy better looking, consistent bunkers that last, and are inexpensive to maintain."