0 Have you got worms?

'What have you got for worms' has been the most asked question I've received in the past year. And, unfortunately, my answer every single time has been a short and succinct 'nothing' much to the frustration of all concerned. But why? And what are companies doing to bring through a safe and effective solution for the control of worms, since Carbendazim was banned over twelve months ago? Phil Collinson, Technical Area Sales Manager of ICL reports. 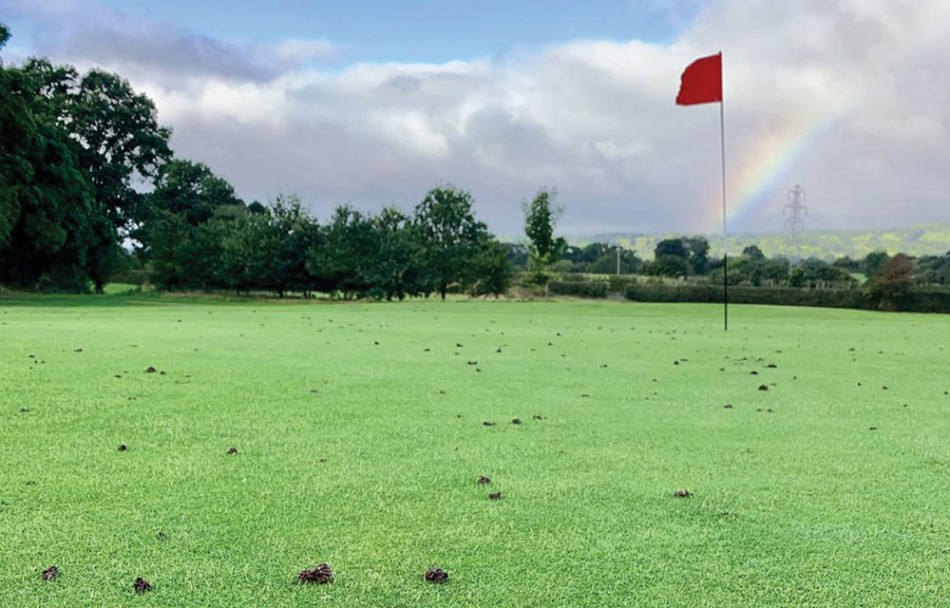 In most situations in nature, earthworm activity is seen as beneficial. They can help break down organic matter, improve soil structure and aid the drainage of the soil. However, worm casts can muddy the surface leading to a thinning of the sward, weed invasion and softening of the surface. So, in the sports turf world, they can pose a serious challenge when trying to maintain the quality of the playing surface.

Carbendazim was previously approved and widely used as an effective treatment for the control of worm casts, however, since its withdrawal from the market in 2019, there has been no approved chemical solution to replace it - forcing turf managers to either accept the consequences of casting worms or to seek other forms of control. There has been an abundance of 'biostimulant' type products and 'soil conditioners' coming into the market, with claims and counter claims - yet you won't find any in our brochure or on our website.

But why is that? Well, trust us when we say we both understand and empathise with turf managers when it comes to the issue of worm casting, but despite numerous research studies, we are yet to come to a solution that we deem as both legal and effective and so have yet to unearth something we are happy to put our name to. We could not (with a clear conscience) market substances that clearly have pesticidal properties as nutritional, soil conditioning or bio-stimulatory.

So, what's preventing a legal and effective replacement for Carbendazim? Well, the truth is, it's very hard - if not impossible - to currently receive regulatory approval for a product for the control of worm casts. I appreciate that's not great news but I hope, by shining some light on the current situation from a legislation and regulatory point of view as well as some of the challenges that reputable companies face in terms of producing an effective treatment, I can bring some understanding to you that may relieve some of your frustration. Although a word of warning - if you're hoping that I'll be concluding with the offer of a proven and effective solution, then you might want to stop reading here! 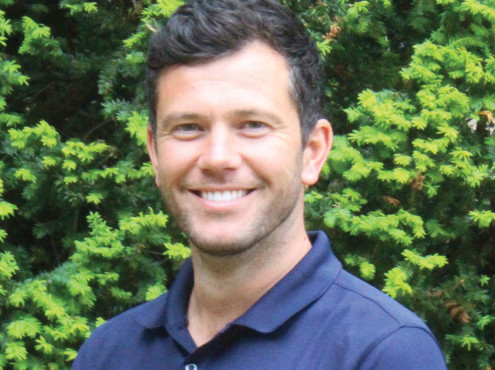 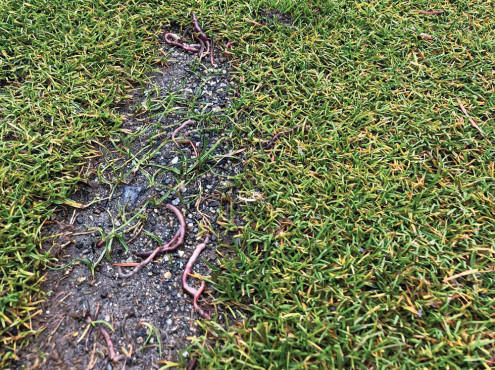 Firstly, let's look at why Carbendazim was withdrawn from the market back in 2019. I often think the lack of explanation as to why products get revoked is part of the problem that leads to misinformation and ultimately frustration from a turf manager's point of view. That message doesn't always get communicated very well and it feels like we are almost left in the dark as to why a product we relied on, to help deliver quality playing surfaces, has suddenly been pulled from our arsenal. Carbendazim wasn't withdrawn to make turf managers' lives harder, but to make the environment a safer place and to protect both the user and the wider public. Unfortunately, Carbendazim had the potential to be toxic to reproductive organs and so, as regulations tightened and cleaner, safer fungicides were approved, this widely used agriculture fungicide became a turf vermicide - until its registration could no longer be supported. I don't think anyone would want to compromise theirs or their staff's safety to control worm casting on turf, and so the answer for worm cast control lays elsewhere rather than the hope that Carbendazim will come back.

Okay, so Carbendazim was deemed unsafe for continued future use, but what research and development is going on to bring through a replacement? Surely companies understand the demand and therefore potential commercial gain for such a product? Well, unfortunately, it's not quite as straight forward as simply finding different chemistry that would be effective - as well as being deemed safe for regulatory approval. Current regulations mean; for a plant protection product to be approved for use, it actually has to show that it doesn't affect the lifecycle of worms - quite a challenge when the product you would want approval for does the absolute opposite! We need to remember the benefits worms bring to the health of soils, and it's for this reason they are protected under the regulations and that's why products being approved for use have to show they do not pose a risk to the health of worms.

Hasn't a chemical company been developing a product knowing the market is in need of a solution? With turf plant protection products generally 'piggy-backing' off the product development in agriculture - where worm control isn't an area of research - then I struggle to see anything coming through on this front. The turf market, whilst is everything to us turfies, isn't a big enough market to justify the cost of research and development to develop plant protection products solely specific to turf. The commercial aspect doesn't stack up - especially when regulations mean that, even if you did discover an effective product, it is highly unlikely to be approved for sale. I think we can all understand why companies wouldn't invest resource into this area.

So, the future doesn't look promising in terms of getting a chemical replacement for Carbendazim, but what about non-pesticidal products? We see a plethora of 'worm cast suppressants' on the market now that generally fall in to the category of sulphur-based surface acidifiers - with the idea being that we know worms don't particularly thrive in low pH situations and so, if we can lower the pH, we can lower the incidence on worm casting. This makes sense in theory but, in reality, lowering the pH of soil can be quite a challenge and so the feedback on these type of products is that they just aren't effective enough to reduce the levels of casting to acceptable levels and the cost can't be justified. 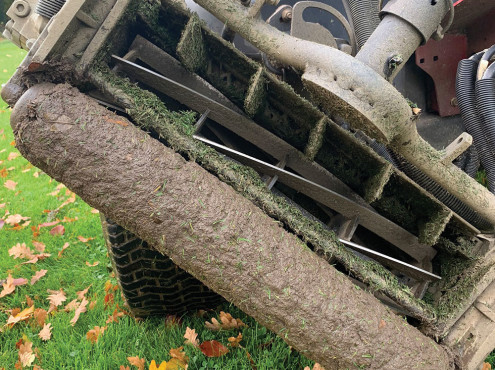 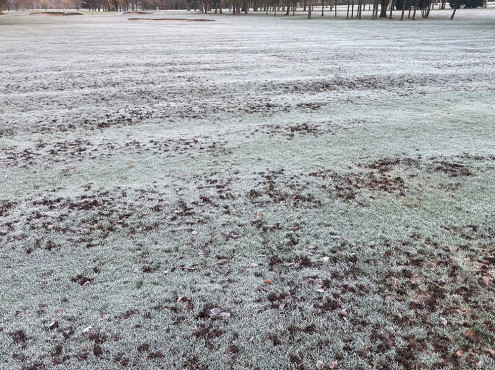 At ICL, we haven't gone down the road of producing a product in this market due to our values of only supplying 'products that perform' and, whilst we have investigated and researched in this area, we are yet to see a result that is effective enough to put our name to. It feels like turf managers are also experiencing this and hence why the debate continues around having an effective treatment available.

What about 'soil conditioners'? They seem to have partially filled the vacuum left by Carbendazim. These tend to be saponin based which is a derivative of tea oil. This is a really uncomfortable area for me to discuss. I understand the frustrations that worm castings bring when managing turf and the pressures to deliver quality surfaces for players, but that said, it is often seen that these 'soil conditioners' are being applied to control worms and some with devastating effect. I personally have an issue here; if we are applying a product that has a direct effect on a pest, like we see with some of these products, then it is being applied as a pesticide and therefore should be registered and regulated. This isn't to increase price and favour larger businesses that have the resources to get products registered. It is simply to keep the user, the public and the environment safe by understanding the full impact of the product. If they are killing worms, then it's safe to say there is potentially some damaging material in there that poses a risk to the user, public and environment and that should be assessed to see if its suitable for use. Of course, this won't happen due to reasons explained earlier in that when wanting to get a product approved as a pesticide, manufacturers now have to prove the product doesn't have a detrimental effect on worms. That's a pretty big obstacle to overcome when trying to get a product that eradicates them approved! 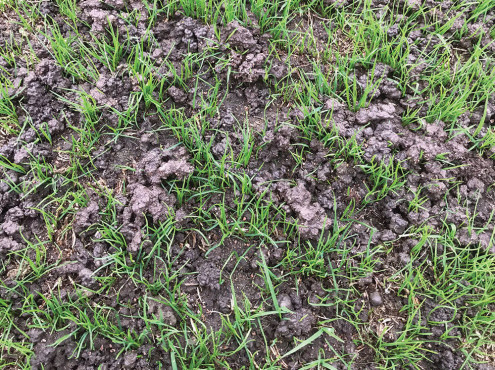 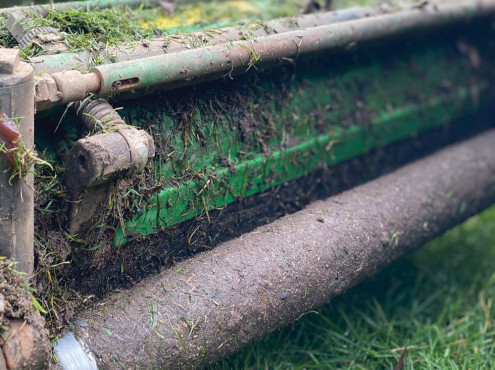 So, what is the future? Cultural practises should always be the first port of call and brushing, sanding, acidifying the surface etc. all have their part to play, however, if these were truly effective to a point that they reduce casting issues to an acceptable level, then there currently wouldn't be such levels of frustration at not having more options to control them. And hopefully we have established the current issues regarding products that are available - be it acidifiers (with their limited effectiveness) or 'soil conditioners' (which pose the question of legalities), then the future should focus on achieving an approved effective control that is safe for the user, public and environment.

But, is there a product waiting in the wings to gain emergency approval? If not then, even if the regulatory bodies accepted the need for worm control in the amenity market and were willing to discuss possible approvals, if that option isn't there then it becomes a moot point. If so, then are the regulatory bodies being lobbied by industry bodies to be made aware of the current predicament, and is there a solution available that's more effective and safer than what's being used currently?

Turf managers just simply want to provide the best surfaces for their players and members and, rather than go down the route of unregulated, untested and often ineffective products, then surely it's better as an industry to be having discussions with the manufacturers and regulators to understand what the options are and communicating that with them! If there are none, then it seems we are left pretty much where we are - frustrated turf managers exploring ineffective or legally questionable treatments.

As an industry, I feel we can and should be doing better than that.