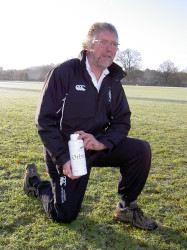 Playing fields at Guildford Grammar School have benefited from Soil Harmony's unique Health Check, which precisely identified their nutritional needs and pinpointed treatments which will lead to healthy, vigorous turf.

Grounds manager Trevor Bradley has been at the Grammar school for more than 22 years. He joined just as the playing fields were being constructed, so he has a thorough knowledge of their development. The school grounds cover 20 acres and include five rugby pitches and three cricket squares.

I could see that the grounds were deficient in nutrients but the uptake of the fertilisers that I was applying was not good," Trevor explains.

"I met Soil Harmony agronomist Mark Atkins at Saltex two years ago and asked him if he would come and take some soil samples to see what was wrong with the ground."

Mark undertook extensive soil analysis and came up with a programme for Trevor to trial.

The analysis showed that levels of nitrogen, potassium and magnesium were low, while phosphorous was high. Micro nutrients were also a cause for concern, with low levels of manganese, molybdenum, sulphur and sodium.

Mark Atkins explains: "Low levels of certain elements can affect the balance with other minerals, limiting the microbial activity necessary for healthy growth and reducing the uptake of important nutrients. Some deficiencies, such as a lack of manganese, can also put the sward at greater risk from disease - in this case take all.

This was presenting itself to Trevor as poor growth and a lack of ability for the sward to use the expensive fertilisers he was applying.

A tank mix of N-Fusion and Bios Turf Tonic was applied to promote fixation and conversion of atmospheric Nitrogen, while boosting organic carbon levels, to feed the aerobic microbes.

"We also recommend applying liquid materials at the same time as a programme of aeration," says Mark. "This ensures contact with the soil and provides Oxygen.

Trevor trialled the treatments on a cricket square initially, also using Nutri-Dol to address the slightly low pH found on this particular area of the ground. "I found that the application really improved the take up of the existing nutrients and the density of the grass increased greatly. After the initial corrective N - Fusion and Bios Turf Tonic were applied in August, followed by monthly doses of Bios Turf Tonic which will continue until December.

On the strength of these results, he has decided to place an order to cover the whole of the school grounds. Trevor has decided not to use any other treatment on the grounds bar Soil Harmony for the next two years.

"It's a pretty detailed programme so there is quite a lot that I have to do" says Trevor. "It will initially increase my workload, but I really don't mind as the benefits will be huge and hopefully will make the maintenance programme easier in the long run. We will apply the treatments right after we Verti-Drain as it will really help get it into the ground.

"Guildford Grammar is a private school and has a very good reputation for sport. The pupils play cricket and rugby to a very high level, so the ground has to be exceptional," he adds.

With efficiency top of the agenda at the moment, any new treatments have to be justified, but Trevor says: "Each year I put in a budget to be approved by a committee and detail what I want. They know I don't waste money so they trust my judgement. They can see this treatment will be financially advantageous in the long run.

"Slow release fertilisers are pretty expensive. Mark has recommended corrective treatments which should mean less money to be spent in the future as we will correct the balance of nutrients in the soil. We will apply the treatments all year round, even in the winter months, so that in the spring the nutrients will give the roots a head start."

A further benefit to Soil Harmony which is winning favour with school committees and local authorities is found in its environmental performance. Derived from natural ingredients, Soil Harmony's range of nutrients are earth-friendly and totally safe, and by using the soil health check to ascertain exactly what is needed, waste is eliminated. Products such as N-Fusion are used in tiny quantities so packaging is minimal, transport costs are reduced and the carbon footprint of groundcare is mitigated considerably.