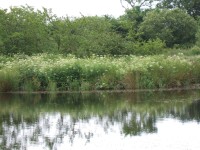 After the wettest winter in history, many sports facilities and open spaces alongside watercourses will see the dredgers in action this spring as the Environment Agency seeks to prevent future flooding. As a result, the tuberous roots of Hemlock Water Dropwort, (Oenanthe crocata), known as Dead Man's Fingers, may be exposed.

A perennial growing to over a metre high in shallow water like streams, ditches, rivers and lakes, this is the most toxic plant to both humans and animals growing in Britain. It contains a powerful neurotoxin called oenanthetoxin, which triggers spasmodic convulsions, usually followed by sudden death.

Whilst the most toxic part of the plant is the tuberous root which give rise to the alternative name 'Dead Man's Fingers', all parts of the plant are poisonous and only a small amount of plant material can be fatal.

For amenity managers with land used for grazing at certain times of year, it is of particular concern - when stocking rates are high and where forage is in short supply, as happens in dry summers, stock may be tempted to eat the plant. It may be worth issuing warnings in open spaces where the public camp, picnic or forage. 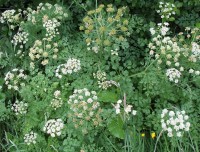 Hemlock Water Dropwort is a member of the Umbellifera family, but is distinctive because of its broader leaves and its narrow flowering period during June/July. (Compare it with Cow Parsley or Alexanders, flowering from April to June, Hedge Parsley or another common wetland umbellifera, Wild Angelica flowering from July to September).

Apart from ditch clearing, animals and people are far more likely to come in contact with the leaves than the roots. The leaves are dark green and look very similar to Italian flat-leaved parsley with a distinctive celery or parsley smell.

Mechanical control: Digging up and handling the roots presents a hazard to the operator and plant material must be carefully disposed of, ideally by burning. 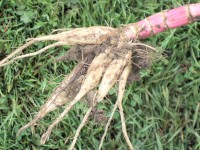 Chemical control: Use of a glyphosate containing product like Roundup ProBio to spot treat individual plants is an excellent way to control the weed. Remember that use of any pesticide in or near water requires Environment Agency approval.

Apply the equivalent of 5l/ha of Roundup ProBio, (1:40 dilution in a standard knapsack sprayer), at the rosette stage or just as the plant comes into flower, but avoiding the period of rapid stem extension. Later application should be before seed set or senescence in June or July. Glyphosate also kills grass, so spot treat with care to minimise any grass dieback.

An alternative method is to use a hand-held weedwiper with two parts water to one part Roundup ProBio. Treatment with the same product, whilst in flower, will prevent the production of viable seed.

All parts of the plant remain poisonous after spraying, so stock should be excluded from the treated area until all the foliage has gone brown and died back completely. 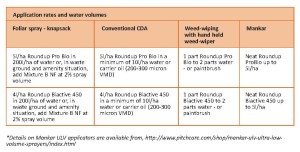 Wear protective gloves and coveralls when handling the plant, whether it is alive or dead.

Monitor the area each year and spray any new plants arising from seed already in the soil.

No British wild plant has been responsible for more fatal accidents: a party of workmen repairing a breach in a towing-path dug up the plants and ate the roots, mistaking them for parsnips; another party, working in a field, thought that a few of the leaves with their bread and cheese would prove a tasty relish: in each case, death occurred within three hours. On another occasion, eight boys ate the roots, and five died - and the other three had violent convulsions.

In ancient history, the plant was used in ritual killings, leaving the victim with a strange grin on their face, due to the paralytic properties of hemlock.