0 Hereford Racecourse back on track! 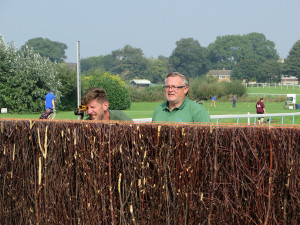 Hereford Racecourse came back to life on 6th October after a four-year closure. It is down to a remarkable team effort, including groundstaff from neighbouring courses in the Arena Racing Company (ARC) group helping to prepare the track, to ensure that runners at the first meeting were greeted by pristine turf and fences. It was as if they had never been away!

When ARC took the decision to close Hereford in 2012, it was met with much sadness, not just by a large pool of local trainers and owners but also by the wider racing industry.

This quirky square track, now surrounded by the urban sprawl of a formerly rural Midlands town, had offered great sport to racing fans from far and wide, as well as giving a start to the careers of many of jump racing’s stars, both human and equine.

“It has a reputation for being a fair, galloping track, which was always popular with trainers and jockeys,” says Rebecca Davies, drafted in as Executive Director and Clerk of the Course from her previous role as Racing Operations Manager at Cheltenham. 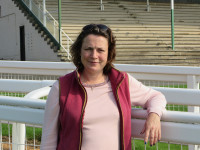 “Champion jockey Richard Johnson rode his first winner here, and we have renamed our restaurant in honour of that horse, Rusty Bridge. As well as a strong racing community locally, we are also within a couple of hours of many of the leading trainers, so there was always support for a re-opening.”

During the four years that Hereford was closed, Head Groundsman John Glover was retained to keep the site ticking over, and it hosted two point-to-point and four Arab racing meetings a year.

However, a significant amount of work was needed to bring the track back up to the British Horseracing Authority’s standards, including installing nine new fences, representing a considerable investment in itself.

To provide the support needed, an experienced team from neighbouring Worcester racecourse was brought in, allowing Rebecca to focus on “everything this side of the white rail” - the public areas - in the run-up to the first meeting. 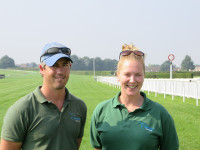 “The current permanent structure here is four staff, two office based and two groundstaff. As the business develops, we will be reviewing that to ensure we have the best and most appropriate team here to deliver a busy racing season, in addition to a busy diary of non-racing events,” explains Rebecca.

“But we will also be looking to work more closely with Worcester, which focuses on summer jumping, allowing us to share resources. There are so many synergies with both courses that it makes sense to pool our combined resource, expertise and buying power through economies of scale.”

The full time team will be supplemented on race days by local casuals to tread in, and by contractors Turf Surfaces for post-race repairs.

“It’s been a big job to get the course back to racing condition,” comments Sean Revell, “although the drainage is generally good and the work put in by John Glover has really helped.” 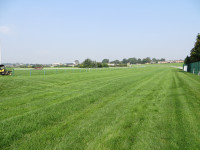 John admits that he took a “make do and mend” approach during the four year closed period, working to a tight budget. “I used a slitter every six weeks, and raked to keep thatch down. The track needed preparing for the point-to-point and Arab racing meetings, so we kept the New Holland tractor and Votex mower to ensure that the grass could be cut properly.”

“Many people were helpful - Chepstow Racecourse supplied some seed when I needed it and Votex are local, so they kept the mower up and running.”

Part of the challenge for the grounds team is that much of the maintenance equipment was given away to other racecourses after the closure, and a gradual re-equipping is taking place.

John Deere ride-on and push mowers are used to maintain the public areas where the lawns, in addition to the parade ring, will be striped to improve appearance.

Vast expanses of conifer hedge around the course and car parks are being brought under control with long-reach hedgetrimmers, whilst additional strimmers have been added to help with tidying up. 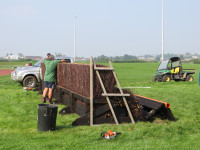 Another important task was to renovate the sites previously occupied by the point-to-point fences. “These areas were decompacted and reseeded and watered over the hot summer. I used grass clippings to keep the moisture in and then germination sheets - the recent rain was helpful, plus some fertiliser,” explains John.

He was able to keep the fertiliser programme in place, using forty-four bags over the twenty-two acres of racing surface.

Applications before and after the first fixture have stood the sward in good stead going into the winter, whilst the late summer storms gave much needed moisture.

“We are looking into a more extensive fertiliser programme for 2017 and have had soil samples taken to establish exactly what is needed,” explains Libby O'Flaherty, Worcester’s Clerk of the Course. “We use controlled release products at Worcester, which works well.”

Summer herbicide sprays and the application of Siren - now revoked - for leatherjackets also contributed to maintaining turf health.
A couple of passes with the Verti-drain - for the first time in four years - in the run up to racing, helped with aeration and encouraged rooting to give the turf a further boost. It also provided insurance against a dry autumn, as irrigation is another looming challenge. 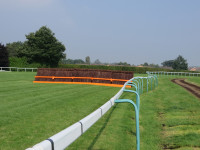 “We have recently commissioned a borehole feasibility study, with the view of investing considerably next season to allow us to become even more efficient and precise with our watering.”

Whilst fellow ARC track Uttoxeter has provided the hurdles, brand new portable steeplechase jumps have been supplied by Watt Fences.

They are built in sections so that the ends can easily be moved to reposition the jumping line onto fresh ground and to allow levelling on the more undulating parts of the track. “It also allowed a review of the fence positions,” comments Libby. “The final fence was on the last bend, so we have pulled it forward slightly, but all other fences are in the same positions as before.”

Each fence is painstakingly built to meet BHA standards, ensuring that they are consistent in height and level across the highest point. Worcester groundsmen Duncan Penny and Steve Green were drafted in for this task.

“We can't emphasise how important Duncan and Steve, plus the grounds team from Uttoxeter who helped unload and position the fences, have been in getting the course ready on time,” says Libby. 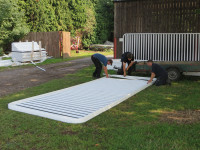 Bob Gilling’s Racing Ancillary Services has supplied four furlongs of extra rail with Duralock providing new wings for each of the nine fences and new gates. Much of the existing rail was serviceable, but had sunk, so John Glover and Paul Evans lifted it out, packed underneath it, cleaned it up and finally checked that it was at the correct racing height.

Road crossings have been dressed with woodchip, with a more permanent synthetic surface under consideration for the future.

One final task was to get the bushes and trees on the council-run golf course in the centre of the track cut back to 2m to maintain lines of sight to the back straight.

Whilst all of the buildings were in place and serviceable, a considerable amount of ‘resurrection’ was needed, including the stable yard being refurbished, along with the weighing room, private boxes and public bars. 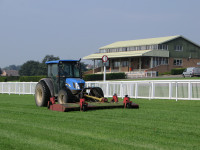 “It is important to remind people that Hereford Racecourse is a reopening, not a new racecourse, so racegoers won’t be walking in and seeing a shiny new grandstand, but they certainly will see a considerable improvement and investment in our facilities, which will be ongoing.  Blackmore Building Contractors Ltd, led by Pete Boenigk, were appointed to do the works on site and have been incredibly helpful - for every problem, they have found a solution.”

Hereford’s racing season extends from October to March, with eleven fixtures planned for 2016-17. “We aim to offer good quality racing for horses of all abilities. In 2016, the meetings are all low key weekday fixtures but, next year, we race on the Saturday before Cheltenham, which will give us the opportunity to raise our profile. Going forward, we will look at headline racedays with more valuable races, or an enhanced racing experience such as a themed day,” says Rebecca.

There is no plan to race year round, she explains: “I firmly believe that tracks need time to rest and repair. Having been effectively out of use for four years, it will be even more important in 2017, especially as we hope to get plenty of runners. But there will still be opportunities for those that supported it in the meantime, such as the point-to-points and Arab racing.” 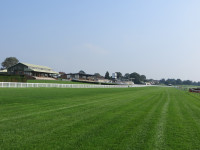 The refurbished facilities are also already attracting attention for non-racing events. “We have already had enquiries for trade fairs, AGMs and parties, to name but a few, and we also let the car parks to a circus last month. I’ve been surprised by the level of interest but, in common with other racecourses, the one advantage we offer is unlimited car parking, plus there is a lack of larger events facilities in Hereford.”

Sean Revell began his career at Worcester Racecourse as a groundsman and, after being promoted to Assistant Head Groundsman, was placed on ARC’s Development Programme in 2016.

“Taking on more responsibility in my role as Acting Estate Manager at Hereford was part of that programme, providing the opportunity to look at the whole picture on the racecourse and giving me new challenges, such as being responsible for the managing the groundstaff team, looking after the stables and working with sectional rather than fully portable fences.”

Sean now moves on to Chepstow as Head Groundsman, and he comments: “I was invited to apply for the role last year, but didn’t feel that I was ready. Taking part in the Development Programme and the role at Hereford has been enormously helpful.”

Rebecca Davies has followed a more diverse career path, starting at Cheltenham as a Commercial Executive. As a farmer’s daughter from Herefordshire, she enjoyed the opportunity to become Clerk of the Course at Wincanton, working for five years with Head Groundsman and former jockey David Cartwright, who she credits as being “one of the best”.

More recently, she was Racing Operations Manager at Cheltenham and, whilst on maternity leave, was offered the role as Executive Director and Clerk of the Course at Hereford.

“It’s an exciting opportunity to start afresh with a new project and have responsibility for both sides of the operation,” she comments. “Cheltenham was a great place to work, but now the buck stops with me and I am genuinely loving the challenge!”