0 Homebase to feeling at home at Redditch Golf Club

Part parkland and part woodland course, Redditch Golf Club winds its way through an abundance of trees, paving a spectacular setting for golf. Recently promoted Course Manager, James Harrison (Jam), has been at the club for the last six years and is testament that hard work and dedication pays off. 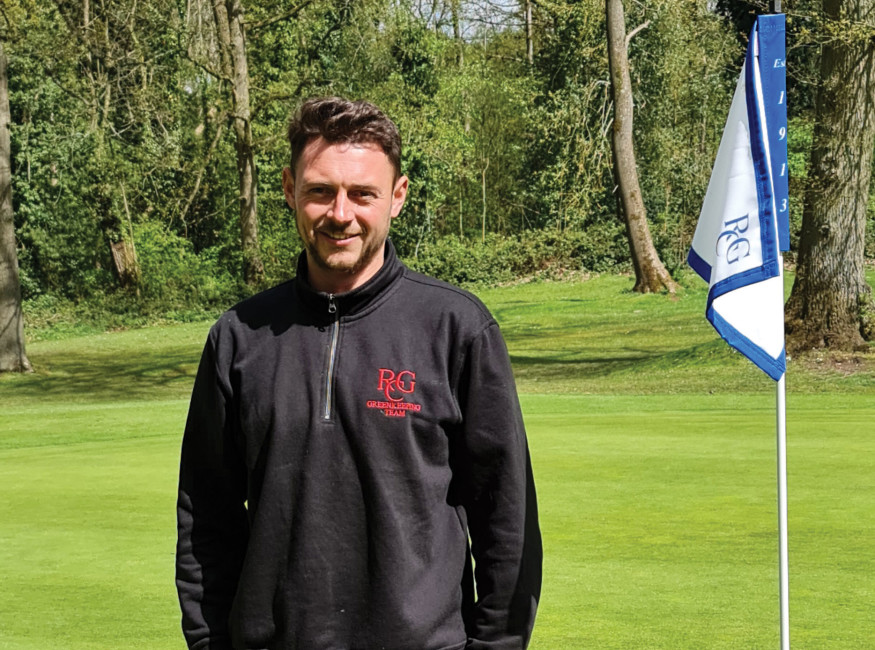 The club was founded in 1913 but, due to the coming of Redditch new town, the club relocated to Callow Hill in November 1972 (designed by famous golf course architect Frank Pennick). Its construction is heavy clay, which Jam explains can have its advantages and disadvantages. "In winter, some areas of the course can suffer badly as water struggles to penetrate through it. However, throughout summer, when some of the sand-based golf courses are struggling with their fairways burning off, our clay profile is still holding onto moisture. Around twenty-six years ago, the push-up greens were dug out and reconstructed to USGA specifications, which is an absolute godsend for the course when we get heavy rainfall."

During winter, some areas can get really wet and getting the golfers around the course can be as challenging as keeping the course open for Jam and his team. "The front nine is considerably drier than the back nine holes. We have begun to install buggy paths and extend existing paths in high traffic areas and wet spots. The idea is to enable the golfers to walk from the tee to the green without causing much damage to vulnerable areas of the course."

"Also, we are looking at installing drainage on the fifth, fifteenth and sixteenth fairways; it's a big project, so it will all come to down finance and if the club wants to go down that route." 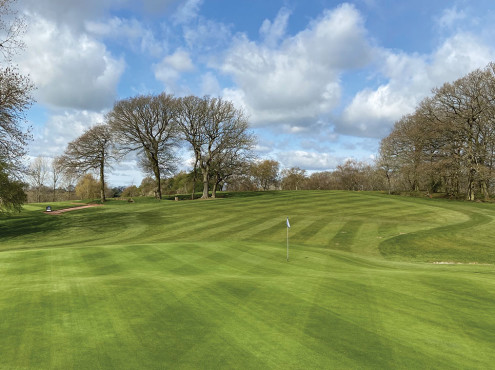 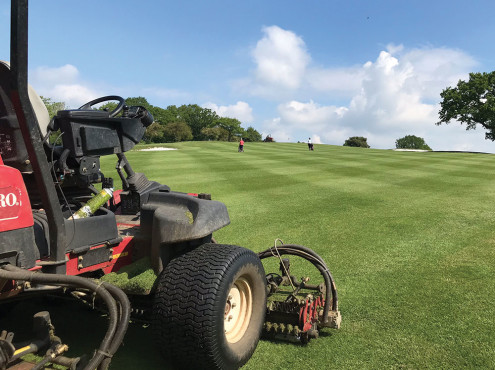 Jam is keeping to what he knows when maintaining the greens and is a firm believer in 'if it isn't broke, don't fix it'. "In summer, we cut the greens using our Toro Greensmaster TriFlex 3420 at 3.5mm every day, depending on our spraying patterns. Even though most manufacturers say their products will be dry on the leaf in a certain amount of hours, if we spray one day, we will roll rather than cut the next day to ensure the product has enough time to get into the plant and that we are getting the full benefit. If we have a big event, we will double cut and roll and, in winter, we will lift the height of the cut to 4.5mm and cut when required."

"Light verti-cutting is carried out every couple of weeks with the GreenTek units on the Toro 3420, at depths of between 2 to 4mm - this helps remove the lateral growth and keep the organic matter levels nice and low. It also helps increase ball speed and smoothness. Every month we will apply a light topdressing using two tonnes of sand over twenty greens, brush in and go over with the vibra-roll units to ensure the sand is well incorporated into the surface."

"As a rule, we will go over the greens with the Wiedenmann Terra Spike XP as deep as we can with the 20mm tines - once in March and again at the end of the season, followed by a heavy topdressing of sand. At least once a month, we will microtine using 8mm and 12mm tines at varying depths to ensure we do not create a pan."

Jam tells me he likes to have soil samples taken regularly by both Agrovista Amenity and Headland Amenity and has a mixture of products across four different distributors for the coming season. "Throughout my last six years at the club, the greens have been in excellent condition, so I am not about to try and fix what isn't broken. I am still learning in my new position and I will keep a close eye on what is going on, look at what could be different and what we could possibly change. Then, at the end of the season, I will sit down with the reps and discuss my findings and determine if anything needs to change."

Jam is a relative newcomer to the industry and, at a time where our industry is struggling to entice the younger generation, Jam is the perfect example of what can be achieved - if you are willing to work hard and learn. "Whilst at college studying public services, I worked part-time at Homebase stocking the shop floor. When I passed my course, I was given a place at Wolverhampton University of Policing, with every intention of following in my gramps footsteps to become a police officer. When I attended the open day, I asked if I was guaranteed a position in the force on completion of the course. At that time, they were not recruiting anyone under twenty-five years old and, by the time I finished, I would only have been twenty-three. So, I was unwilling to take the risk of doing another four years of education and then have to do a two-year gap before joining the police."

"I asked for more hours at Homebase and started to work there full-time, working my way up to manager level - even opening a new store in Bromsgrove. Retail for me is not a nice job to be in; the late opening hours are not great and you would have to work every weekend. I decided it was not the career for me and I needed to look for an alternative path. One day, my dad told me he had seen a job advertised on Facebook for an assistant greenkeeper at Redditch Golf Club. He thought this may be an excellent opportunity for me and a great fit, as I have played golf since I was a kid and I love the game. I didn't have anything to lose and got the job, even though I had no prior greenkeeping experience." 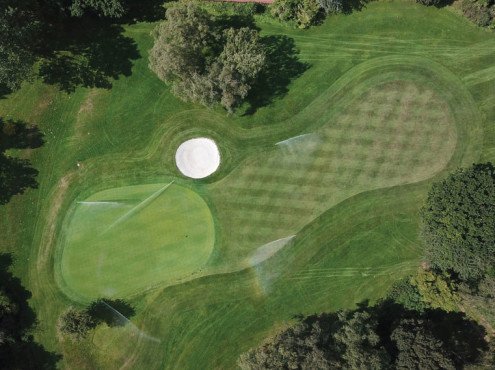 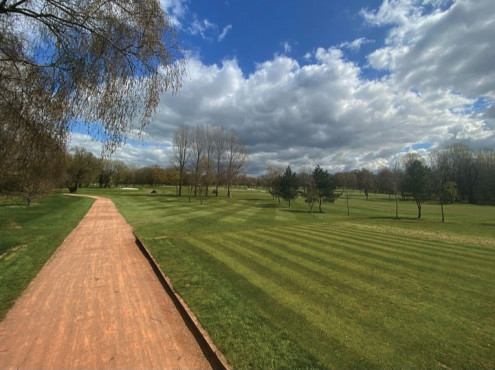 Given Jam was new to the industry, I wanted to know if he was classed as an apprentice or an assistant greenkeeper. "I never had the title of apprentice; I think the course manager at the time, Karl Williams, considered my previous experience as a manager at Homebase and brought me in as an assistant. They put me straight through my NVQ Level Two in Sportsturf and, as soon as I passed that, straight onto my Level Three."

Jam is a believer that everything happens for a reason and, in March 2019, the opportunity arose to apply for the deputy head position. He was given the job and made the most of showing Karl and the club what he could do, which has now paid off in dividends. "In February 2021, after working wonders here at Redditch, Karl decided he wanted a new challenge. This opened up the position of course manager and it was definitely the next step I wanted in my career development. The greens chairman and general manager approached me and asked if I wanted the position and if I was ready for it. Of course I said yes and I was given the position on a probationary period at the start of April."

"Once Karl was given the news, he stepped back and gave me the reins in his final weeks, which was great for me because I still had him there to answer any questions and I could pick his brains."

I asked Jam how he finds the job so far with the added pressures that come with being a course manager. "I am really enjoying it and we have received some great comments so far about the course. However, it has been quite challenging over the last couple of months with the cold nights and heavy rainfall which has limited the growth, but we are getting there."

Regardless of only being in the position a few months, Jam has a good idea of how he wants to manage his team and what minor improvements he can adopt to improve the solid structure in place. "I believe everyone has their own management style. I completed quite a few management courses in my past career, which helped me develop my techniques of managing staff and talking to customers. This means even in a heated situation with a golfer, I can approach them correctly and, in the same way, manage the lads to get the best out of them."

"Most of what I know has come from listening, asking questions and watching the way Karl managed the course. Being young, enthusiastic and at the start of my career, I am keen to put my own stamp on it. So, the hand mowers are going out a lot more; we are cutting areas that have not been hand mown before such as approaches, aprons and run-offs. The general condition of the course is very good and a lot of work has been undertaken over the past few years, including the renovation of all bunkers, so it is just of matter of maintaining them." 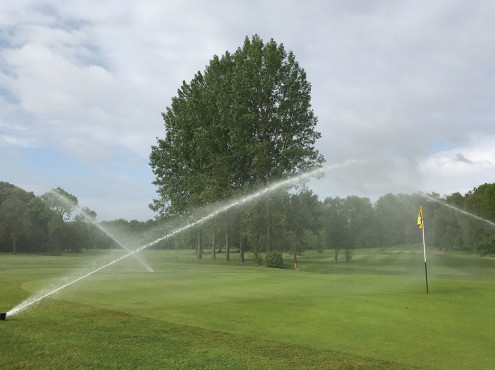 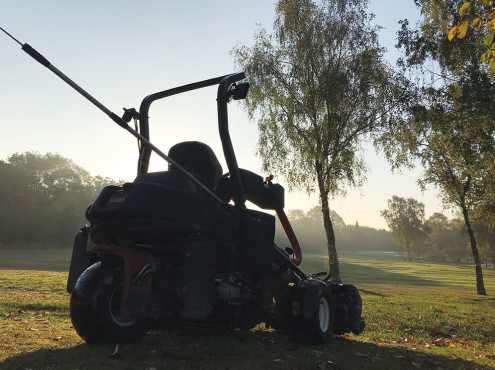 The club embarked on a significant project in 2019; investing heavily in the installation of a fully automated Hunter irrigation system and they are now starting to see the benefits. "In 2015, Karl had an appraisal of the old irrigation system, which confirmed the inadequacies and poor reliability of the system, with continuous bursts and cable breaks, which resulted in an awful lot of hand watering. Following the summer of 2018, the proposal to install a completely new irrigation system was passed by the committee and approved by 97% of the club's members. A plan needed to be put into place quickly for the new system to cover all greens, tees, approaches and green surrounds. After speaking with Hunter Industries, there was no doubt in Karl's mind that it was the way to go due to the quality of their products."

I spoke to Wes Henshaw, National Golf Sales Manager K.A.R UK Ltd, who told me about the system's specifications installed by Prime irrigation. "This included the Pilot CCS PC-based central control system - a software package that makes central control of large-scale irrigation systems affordable, usable, and comprehensible. It also included G885D Series Rotors - which have a built-in decoder offering single head control, superior uniformity coupled with the TTS technology allowing every serviceable element of the rotor to be accessed through the top, so you can get to every component without disturbing the plaLee ying surface - no more digging, no more unsightly scars, and more importantly, one less item on a busy course manager's schedule. Also installed were I-20 Series Rotors on tees which utilise the Match Precipitation Rate (MPR) nozzles."

Jam commented: "The new system has been an absolute game-changer. It allows us to apply water in millimetres and simply replacing the daily deficit every night has made a huge difference. Even in the highest temperatures, the greens do not lose moisture and we no longer have to worry about them looking worn. They are consistently good, which is great from a player's point of view."