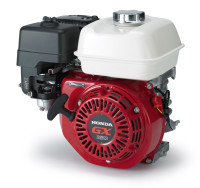 Honda continues to lead the way, with the launch of the updated range of Mid-GX engines - the long-term standard in power for a wide variety of applications.

iGX version: equipped with an electronic, factory programmed speed regulator to suit applications that require features such as 'Auto-Idle' and 'Auto-Choke'.

The dimensions and outward appearance, however, remained virtually unchanged, guaranteeing 100% interchangeability with the current GX240/270/340/390-engines. For the same reason the naming of the engines remained unchanged. 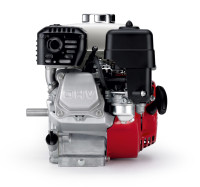 Today: we also announce the launch of the redesigned GX120, GX160 and GX200 series. Between the end of 2011 and early 2012 they will gradually replace the existing engines.

As with the GX240, GX270, GX340 and GX390 series, Honda developed the new Mid-GX series with technologically advanced features which make a major contribution to lower emissions and improved noise and vibration depending on the model.

Because the new engines essentially match the dimensions of the existing GX models they replace, original equipment manufacturers will not have to modify the design of their equipment.

The design configuration of the new Honda GX models reduces pollutants such as hydrocarbons (HCs) and nitrogen oxide (NOx) while maintaining the same level of output power as the engines they replace. Although the exact measure can be different depending on the model, the engines cut HC emissions by reducing oil consumption via a redesigned piston shape and piston ring, along with modified carburetor settings. In addition, NOx emissions are reduced by an adjustment in ignition timing which reduces combustion temperature and pressure.

Although in Europe, engine manufacturers have to meet the 'Euro 2' emission standards, Honda's policy is to offer engines that meet the most stringent standards worldwide. Honda's current benchmark is the US EPA Phase 3 exhaust and evaporative emission standards. Unlike the current 'Euro 2' regulations, these impose standards for the evaporation of fuel through the tank and fuel lines, and are thus even more stringent.

In fact, Honda has exceeded European emissions standards for many years. Our 'U'-type engines, for example, meet Euro 2, EPA Phase 2 (and now Phase 3) and CARB Tier 3 standards. By this voluntary action we have achieved a substantial reduction in environmental pollution.

If we consider only the engines GX120 up to GX390, compared with engines meeting only the Euro 2 emission regulations, we have achieved:

• 52% lower exhaust emissions (HC+NOx). If we consider sales in Europe over the last 12 months, this implies a total reduction of around 2.243 tons of HC + NOx over the estimated lifetime of the engines.

• 83% lower evaporative emissions (HC). If we consider sales in Europe over the last 12 months, this implies a total reduction of evaporative emissions of 913 kg/day of HC.
Since Euro 2 has no standards related to fuel evaporation, we compared CARB Tier 3 with the evap-standards defined in CARB Tier 2 (assuming that nowadays standard fuel tanks/lines meet Tier 2 requirements).

The above calculations do not even take into account the stricter EPA Phase 3 standards - the most stringent emission regulations in the world - which will be met by all the U-type engines featured in this press release. 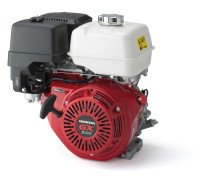 The aim of EPA in making this ruling was to reduce hydrocarbon emissions from small spark-ignition engines by approximately another 35 percent. These new exhaust emission standards will take effect in 2011 or 2012 in the United States, depending on the size of the engine.

The decision to market these engines in Europe (where, strictly speaking, we need only comply with Euro 2 emission regulations) clearly demonstrates our commitment to the environment.

The introduction of the GX range in 1983 proved a great success in the general purpose engine industry. In fact, Honda has led the market for professional applications for more than 25 years.

Over that period, other manufacturers have developed new engines, specifically targeting the GX range. However, the incorporation of new technologies in our engines, to deal with today's environmental and fuel cost issues as well as future emission regulations, has ensured that OEM products ''Powered by Honda'' continue to satisfy end-users' needs, while offering distinct and competitive advantages.

Honda is the world's largest manufacturer of engines, producing more than 18 million units annually, for a diverse array of automotive, motorcycle, marine and power equipment products, as well as a complete line of small, general purpose engines for commercial, rental industry and premium consumer applications.

At Honda, our policy is to continually strengthen our engine range. Where others are content to follow, we are determined to lead, and to maintain our competitive edge by constant technical innovation.

We are confident that the now completely updated GX line-up will offer even better support for our policy of "helping people get things done".