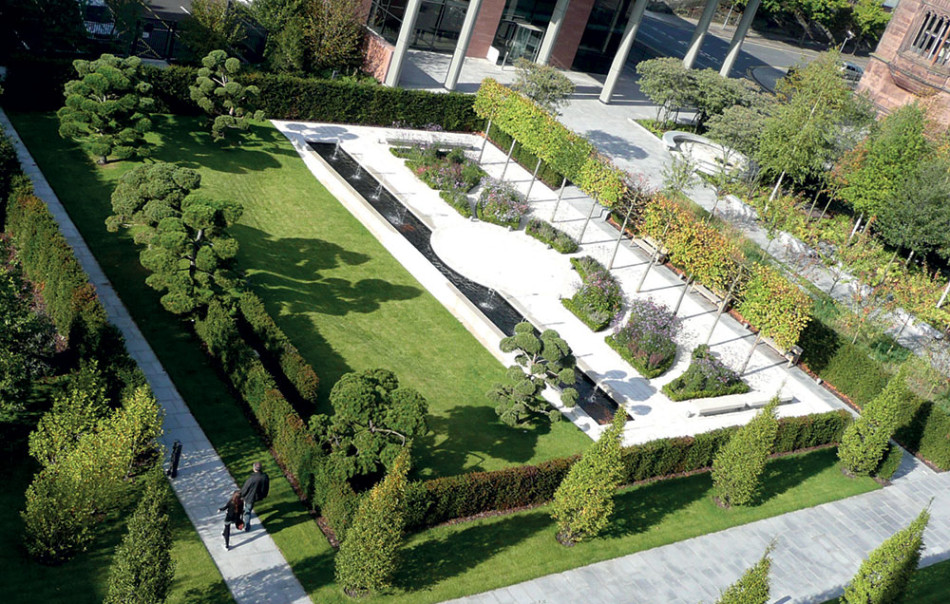 Martin Grayshon knows a thing or two about university groundscare. He worked as grounds manager at Liverpool John Moores University for twenty-one years, leaving there in 2011 to take up the equivalent position at Edgehill University for ﬁve years before moving to Wirral Borough Council in 2015 as its area manager.

Staff cuts followed however, and Martin opted for an early voluntary retirement package. It was while negotiating his departure that the Liverpool Hope position became available and he applied.

"They'd interviewed several candidates but they didn't ﬁt the bill, I understand," Martin explains. "They soon asked me in for an interview and, once they'd seen my portfolio, they thought I was the right person, so I came on board in early March 2021."

Now Head of Grounds and Gardens at Liverpool Hope University, Martin's mission is to lift the sports and amenity provision to the standards his own professionalism demands and the university requires.

His task is a frighteningly simple one; "to return the grounds and campus to their former glory," he states. "They had grown tired mainly due to the impact of Covid and a lack of long-term and regular investment." 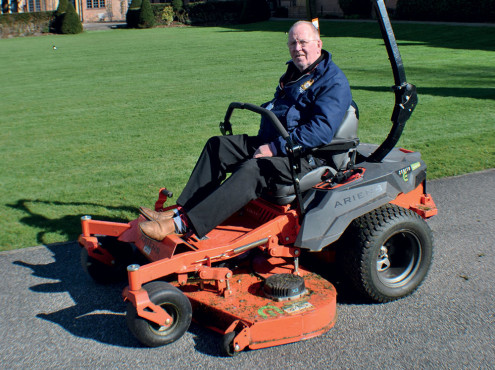 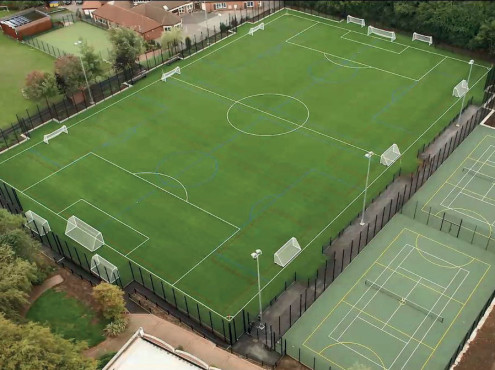 "My strategy is do things with a modern approach but not to forget traditional methods, with plenty of emphasis on herbaceous borders, shrubbery and landscaping."

Martin has a like-minded horticulturist in the university's Vice-Chancellor Professor Gerald Pillay. "He loves growing roses and we have plenty of them on campus, so that's one of my key priorities."

Martin's move to Liverpool Hope is a timely one, as he ﬁnds himself in the midst of sustaining a multi-million pound investment in education as the provider replaces existing infrastructure and expands its student accommodation.

"A tranquil environment is very important here," Martin reports. "Many students study social sciences and care subjects and education and the university is keen to create a relaxing setting for them."

"Although we are sited adjacent to main roads, noise levels are low, partly due to the volume of tree cover we enjoy, with some 1,000 across our three sites."

"Mental wellbeing is a massive concern these days and we are lucky that so many students remark on just how much they enjoy the grounds."

A clock sitting at the top of the main building chimes, and a sense of history sweeps over us as we talk. "It marks the quarter hours," Martin conﬁrms, as if to emphasise the importance of time in the grounds team's mission perhaps.

Noise can cause stress day to day as the 'layers of life' grow ever more intricate. That, in turn, can impact mental wellbeing, a strong motivator in itself for transitioning to quieter grounds maintenance practices.

"Our vision is to go all electric," Martin conﬁrms, "but Government needs to give the industry the ﬁnancial incentive by reducing tax on machinery in line with the targets on zero use of fuels as set by Westminster." He's already making moves though and had been trialling a new battery powered ride-on earlier this year to tackle some of the main, Hope Park, campus's 28 acres and the two far smaller sites, the Creative Campus in Liverpool's city centre, and the postgraduate hall of residence at Aigburth.

Martin reminds me why the main campus carries such a sense of the past. "This was once a theology college. It dates back to 1930 and replicates one of the University of Cambridge colleges. The monastery next door to us is residence for the Pope when he has stayed previously in Liverpool."

Martin and his four-man team are always hectic, managing the demands of a mixed sporting and amenity site. 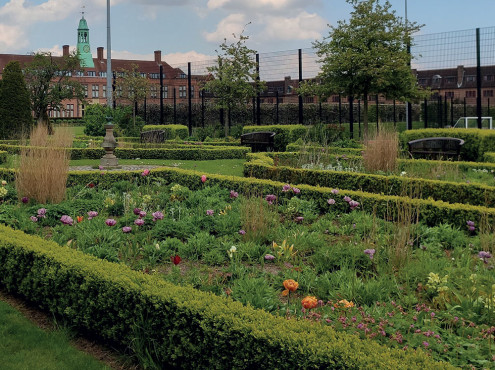 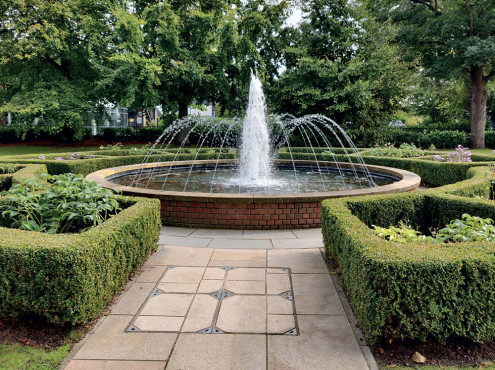 "Leaves, predominantly beech - prominent in the area - are a major issue," he says, "and they involve us in a load of hard work with hand tools to keep them off pitches and lawns."

However, Martin hit on an idea to save much of the donkey work - a means to cut and mulch the mountain of fallen foliage on a regular basis as season demand.

"No bagging's needed now," he says excitedly. "We blow leaves to the centre of the pitch or lawn, then use our new Ariens Zenith E electric ride-on. A couple of runs up and down saves us so much time and effort."

The zero-turn unit runs off four removeable lithium-ion batteries and is designed to complete a full working day between charges. Power is drawn from fully-charged batteries ﬁrst before being drawn from all four equally. Martin's certainly an early adopter of what is billed as the ﬁrst of its kind in terms of a university using this method.

Given the variety of terrain the unit may run over, the blade slip feature is said to absorb impact with little risk of serious damage.

Sounds like a bonus for everyone; less machine noise and more time for the team to focus on other tasks. "Yes, I've known Jason Lord, from dealers GGM Groundscare based in Burnley for many years, as he supplied machinery to the other university sites and to the council."

"He mentioned the Ariens machine and it sounded like a good fit with my move over to an all-electric fleet. When I heard about the mower, I contacted him to say I was interested in trialling it, which I did successfully for several weeks, before deciding to order one at the end of April."

Manufactured in Minnesota, the mower fell victim to shipping delays and he didn't receive it until June; no fault of the dealer, he continues. "The team use it to look after the main grassed areas to replace the propelled rotaries or push mowers. Our old main mower was unreliable signiﬁcant health and safety risk and money drain, so the Ariens is doing the job now."

"It's comfortable to ride on and we can complete campus work in around ﬁve hours, with one hour's rotary work and another hour strimming. The machine came with a striping kit but, to be honest, it stripes up well without using the attachment."

The real beneﬁt is the cost saving on fuel, Martin says. "Petrol and diesel spend across the ﬂeet amounted to about £75 a week," he reports. "That's been cut to £25 every two months. The ﬁgures speak for themselves. We're using our blowers - all petrol-powered - far less now, as we use the Ariens."

"Strimmers and small hand tools take most of the fuel outlay now. The diesel tractor is operating less and fuel spend for that came to £35 for the whole summer." 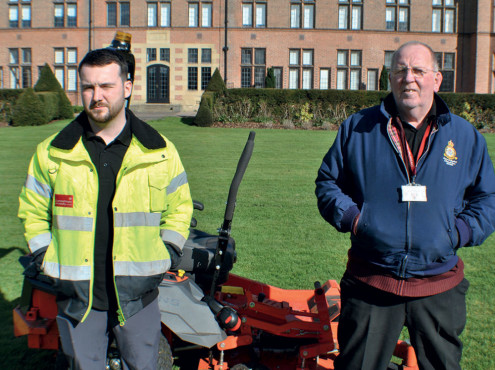 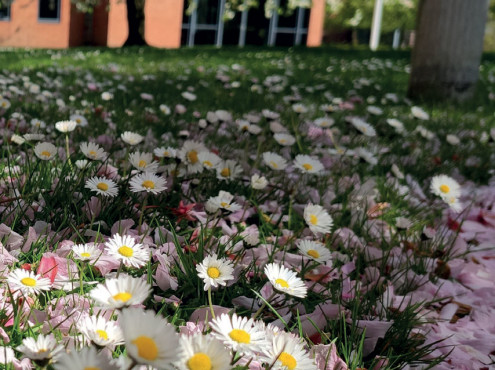 Arb work is underway in earnest, Martin continues. Two of the topiary yews on the main campus needed moving to make way for change. "We're going to plant more than twenty trees as part of the Queens Green Canopy initiative and the three yew cones had to relocated due to commencement of new building. One of them is four metres high and three metres wide. After carefully isolating the rootball, we managed to move the tree the 100 yards to its new site, using straps, boards and chains."

"The other yew, six feet high, was slightly easier to manoeuvre but together they took me and the contractor two days to move to move due to the restriction of access. Three topiary yews now stand at one end of the Rector's Lawn, and three at the other end in place of an inbalance in planting."

Hedging also lines many walkways and paths. "Inherited carpinous betulous is plentiful but has been neglected. Roy Corden, who handles all our topiary work, is busy retaining the shape and the correct height of these features. He's a master at the work," says Martin.

"The University has a massive woodland boundary with many TPOs in place. Colours run riot in autumn. Tree management is important to prevent wind damage and risk of falling branches and boughs, but I find few people want to handle the work."

"A tree survey and maintenance programme is in place so we only tackle superficial pruning."

Non-native species, such as rhododendron ponticum - the mauve variety that many estates managers and owners are on a drive to dig out because of their invasive nature - are making way for other plantings.

There's heavy work going on around the site. "Much of Liverpool is built on bedrock. Dig down two feet and you hit solid sandstone (used to stunning effect to construct the city's monumental Anglican cathedral)."

Martin and the contractor handle all the excavation work, including breaking up concrete areas to help prevent flooding, because of the shallow surface of soil and the solid rock beneath.

The quantity of borders, shrubbery, hedging and of course the prized rose garden, makes a mix-skilled team vital in Martin's mission for the Liverpool Hope grounds however.

"Vice-chancellor, Prof Gerald A Pillay, designed the rose garden and was a passionate gardener," Martin says. "The current VC is equally enthusiastic."

Alongside 'craftsman gardener' Roy Corden, Jordan Kavanagh has just completed his NVQ Level X in horticulture at Myerscough during Covid. Completing the team is Mike Bowler.

So, what's Martin's strategy for bringing back the glory days? "I have changed the maintenance regime as it was not fit for purpose," he states. "Our work has to accommodate the busy periods in the year, such as graduation, as this is a time when the university must look its best to publicise itself. That makes programming the work key."

At 64, Martin is still hands on. "I'm out on the tools from 7.30am, mowing and blowing," he reveals. "With only two in work at any one time during Covid, everything was in danger of slipping. I pulled the place down, keeping paths clear and the grass clipped." Safely through that hazardous episode in the nation's history, Martin's pressed the 'full steam ahead' button.

Modern landscaping is underway, with the team blending the university new builds with older structures.