0 How much of the UK is covered in golf course? 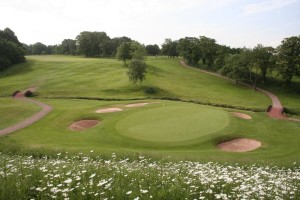 A planning battle has been raging over what campaigners say will be the 142nd golf course in Surrey. But how much golf course is too much?

Cherkley Court is the frontline in a fight over golf.

The 19th Century Surrey country house once owned by press baron Lord Beaverbrook is to be turned into a five-star hotel and luxury golf complex. That's if the £60m refit is given the go-ahead.

Objectors say the scheme will overrun the North Downs greenbelt, damaging areas of outstanding natural beauty. But their trump card is sheer weight of golf. It would be Surrey's 142nd golf course, they claim.

A judge recently quashed the local council's decision to back the developers' plan. Mole Valley District Council is now appealing against that decision. The case will be heard in March 2014.

So how much of the country is golf course? There are no official figures on the percentage of land given over to golf. But it's possible to work out a reasonable estimate.

Most courses are affiliated to one of the national golf bodies. Golf England has a county breakdown of affiliated clubs that lists the number of holes for each. The list doesn't include driving ranges, pitch and putts, and non-affiliated courses. According to Golf England, there are a mere 103 clubs in Surrey, with 1,764 holes in total.

One might expect Scotland to have the densest golf territory. It is said to be the nation with the most holes of golf per head of population. The town of St Andrews alone has 12 courses. But when it comes to counties, one can only speculate. The Scottish Golf Union does not have a county-by-county breakdown of golf courses.

Taking Golf England's figures one can work towards an estimate.

Let's take the size of the average golf course as 45ha (111 acres) per 18 holes - it's a figure that a number of golf experts concur with. Divide this figure by 18 and the per-hole figure is 2.5ha.

Multiply this by the number of holes in a county and one should get the total amount of land used for golf course in a county. One can take the figure for county area from the Office for National Statistics and work out the percentage that golf makes up.

Read the rest of this article on the following link:-BBC