The Horticultural Trades Association (HTA) is delighted that three out of seven water companies have announced today that they will lift their hosepipe bans from tomorrow (14th June 2012). The record rainfall that has hit the UK since the beginning of April has allowed Thames, Anglian and Southern Water to lift their hosepipe bans with immediate effect.

Gary Scroby, Policy Manager at the HTA comments: "This is excellent news. It immediately lifts the restrictions from 14 out of 20 million consumers that were affected when the hosepipe bans were implemented at the beginning of April. If the weather turns and summer does arrive in earnest, the lifting of the ban can only help the market in what has been a dire peak season because of the rain. But, as always, we still urge all gardeners to use water wisely at all times." 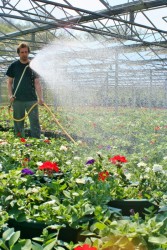 The three companies that have lifted the ban have been able to do so because they draw their supplies primarily from surface water. However, even the record rainfall has so far failed to sufficiently recharge groundwater levels which had dropped to record lows as a consequence of two successive dry winters. This means that the other four companies who rely more heavily on groundwater resources (South East, Sutton and East Surrey, Veolia Central and Veolia South East) are not yet in a position to lift the ban.

Scroby adds: "We know from bitter experience in 2006 that garden industry revenue would have fallen significantly if the ban had stayed until the autumn, so we are grateful to the three water companies for lifting the ban as soon as they possibly could. Indeed, since the bans were implemented in April, we have been able to build a constructive relationship with the water industry body, Water UK and with individual companies like Thames Water. We aim to strengthen this relationship over the coming months as we take forward a couple of projects to demonstrate our water efficiency credentials".

From the outset of the bans, the HTA secured an exemption for drip irrigation which helped to mitigate damage to the industry whilst promoting long term behavioural change on water efficiency. The HTA will be working closely with other stakeholders to provide the evidence base that this exemption does indeed provide water savings and should become a permanent exemption for future years. More recently, the HTA and other landscape and turf professional organisations secured a concession for professional landscapers and their customers to water newly-laid turf and plants for 28 days. The various bodies involved are now working up the potential for training programmes to spread best practice across the landscape industry in an effort to safeguard their interests during future bans."

For more information about the HTA, please visit www.the-hta.org.uk