by Carl Pass
in Football, Consultancy, Rugby, and Renovations & New Builds
on 14 Apr 2015 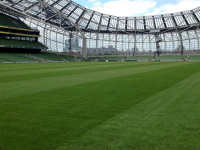 In my first article, I gave my opinion about how it is now, more than ever, a fundamental requirement to clean out and prepare a new pitch rather than repairing an old one each season. This is particularly relevant at high quality venues such as the ones found in stadiums and training grounds at international and professional level. I looked at how this could be best achieved on a fibre reinforced system using the tried and tested technology available. In this edition, I would like to look at how to achieve the same results on a hybrid pitch using new technology.

Few can argue against the fact that hybrid pitch reinforcement systems have been a fantastic development in professional natural sportsturf technology, especially in high use scenarios such as multi-use stadia. GrassMaster is one internationally successful system that has been installed in both stadiums and professional training centres by many top clubs and national associations.

The system consists of a 100% natural grass pitch, into which 20 million artificial fibres are injected, approximately 18cm into the rootzone in a 2cm x 2cm pattern.

The provision of the fibres essentially provide vertical stability and, as such, a resilience to damage seldom seen in other forms of pitch stabilisation. The roots of the natural grass also entwine with the synthetic fibres and are anchored to the pitch. The intended result is a stable and even playing surface. The stitched in hybrid system enables an easier transition between sports and non-sports events and is, therefore, an ideal pitch choice for the multi-use venue.

One of the few problems that Grounds Managers and Head Groundsmen had with the hybrid pitch reinforcement system was the inability to effectively renovate the surface, and the effect that this had on the health of the grass plant, the soil structure and the long term performance of the pitch.

Some of the early hybrid pitches in the UK and Europe were removed; this wasn't a failing of the hybrid system nor the work that was undertaken during the pitch renovation by the sportsfield contractors, it was just that the technology hadn't yet been developed to successfully renovate these 'high spec' pitches to the same standard as both natural and Fibresand reinforced pitches.

Listening to the comments made by grounds managers, it became obvious that they needed a different approach and specific machinery to give them a clean, free draining, healthy, deep rooted new pitch.

It was with this in mind that we started to think of ways to tackle the problem and embarked on a development programme, which resulted in a new and unique hybrid pitch renovation process. This process, along with newly developed machinery, minimises the amount of traffic on the pitch by eliminating the need for secondary handling of the material, as all herbage and resultant organic accumulations are removed from the pitch in one process via trailers, offering a clean, quick, efficient process.

After initial trials of prototype machines, tweaks and improvements have been made to enhance the quality of the whole process. We have now renovated many hybrid pitches in the UK and Europe using our system and the results speak for themselves.

The whole procedure is based around effectively loosening and removing the existing sward/herbage and debris from the surface, with minimal disruption to the hybrid fibres. Each individual project is assessed prior to the work commencing, as pitches that have not received a thorough renovation in previous seasons will differ in requirements to those renovated on an annual basis.

A typical renovation on a well maintained pitch would involve the following: The pitch may be sprayed off with a suitable weedkiller and given chance to die back where time allows, if this is stipulated by the grounds manager or consultant. However, this is not always necessary and, on occasions, may not be beneficial.

The hybrid cylinder makes an initial pass over the pitch. The machine is designed to dislodge and remove a high percentage of the existing sward from the surface with minimal disruption to the hybrid fibres, in the same way that the Koro Field Top Maker works. It then elevates the arisings into trailers for removal and disposal. The key point to note, at this stage, is that little or no material is allowed to settle back on the pitch.

Whilst this process is on-going it is followed by a Contra-rake, which serves to gently rake and loosen any stubborn material that may be left on the surface. Any material which has not been removed by the hybrid cylinder, particularly along the headlands, will be removed carefully and disposed of accordingly.

An evaluation of the pitch is then made at the end of this part of the process, but normally a second pass is necessary, with the hybrid cylinder set to 'clean up' mode. A further pass is done with the Contra-rake; this is normally done to loosen existing rootzone within the synthetic sward which does not need removing.

Levels are then corrected and made good using a restoration rake. This is an important part of the process as it helps to separate and stand the fibres up prior to the next operation.

Topdressing is then applied at a rate specified by the grounds manager or consultant. The restoration rake is used throughout the sand spreading process to ensure that the fibres do not get buried. 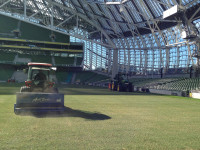 Overseeding is then carried out using an appropriate seeder, followed by an application of pre-seed fertiliser. This is perfect for getting the desired seed to soil contact in the surface of a hybrid pitch.

Depending on the specification, the last step would be to aerate the whole pitch.

The key to the successful performance and longevity of any hybrid pitch is, without doubt, to ensure the efficient removal of last season's sward/herbage and organic accumulations which may have built up during the year. This is particularly relevant to pitches which are maintained under artificial lighting conditions, as many of the leading clubs currently are.

Recent history has shown graphically the difference in quality between prepared and repaired hybrid pitches. The pitches which have been prepared for the new season have performed far better than those which, for whatever reason, have opted to repair.

The next generation of hybrid reinforcement in the form of SISGRASS, will be installed at several European venues during the forthcoming close season.