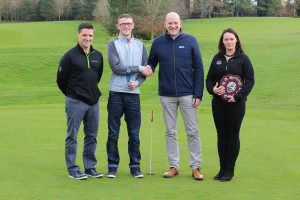 The winner of the ICL & Syngenta sponsored Irish Student Greenkeeper of the Year award has been announced as William Fitzpatrick.

Reinforcing their commitment to education within the turf care sector, both ICL and Syngenta are delighted to sponsor the Irish Student Greenkeeper of the Year award. The award is part of the Kildare and Wicklow Education and Training Board's (KWETB) Greenkeeping Training Course run at Naas Golf Club in Kerdiffstown, County Kildare. For a period of 48 weeks participants incorporate theory training while gaining valuable hands on practical greenkeeping experience at a number of golf courses.

The theory aspect of the course covers eight Further Education and Training Awards Council (FETAC) modules including Establishing Turfgrass, Horticultural Science, Plant Identification Care and Maintenance, Safe Horticultural Practice and Establishing Trees and Shrubs. The course, which has been running for ten years, leads to a FETAC Level 4 Certification in Horticulture specialising in greenkeeping.

It provides a fantastic opportunity for aspiring greenkeepers and opens the door to a number of options such as employment, further education or even an internship in Ohio, USA, where students have the chance to work at golf courses like Bay Hill and Pebble Beach.

Each year one of the participants is selected as the student of the year, which recognises the individual who has performed the best - both academically and practically. This year saw William Fitzpatrick, from Laois; pick up the award after he demonstrated great practical skills as well as receiving a distinction in all eight modules.

While on the course William proved to be a very diligent student who also picked up practical experience by working at Dunmurry Springs Golf Club. He was a model student always willing to go the extra mile and is now looking forward to starting his new job at Portarlington Golf Club in Laoise. William, who has recently become a father for the first time, plans to continue with his studies in Sportsturf Science and someday hopes to fulfil his aspirations to be a Course Superintendent.

The presentation took place at Naas Golf Club, where William was presented with his award by Colman Warde, ICL's Country Manager for Ireland.

Commenting on the award and ICL's continuous support for education, Colman said: "ICL is committed to investing in the future of greenkeeping in the UK and Ireland and we see these young greenkeepers as the future - they're highly important to us."

"This is a fantastic, well-run course and it is just one of the events that we are strongly supporting as well as Turf Science Live and other educational events across the country."

Course coordinator, Aisling Mahon from Naas Golf Club, was also upbeat about the club's partnership with ICL. "We are delighted to have our Greenkeeping Student of the Year event sponsored by such an innovated and inspirational company. Over the past 12 months our students have attended other ICL educational events which help to build their knowledge and allow them to keep up-to-date with the industry standards."

"We are extremely proud of the Greenkeeping course we run at Naas Golf Club as we believe it helps to produce the turf professionals of the future."