by Charmian Robson
in Machinery & Mechanics
on 16 Jun 2019

Kyles Athletic Shinty Club has turned to the Imants ShockWave 100 from Campey Turf Care Systems to solve their drainage problems. 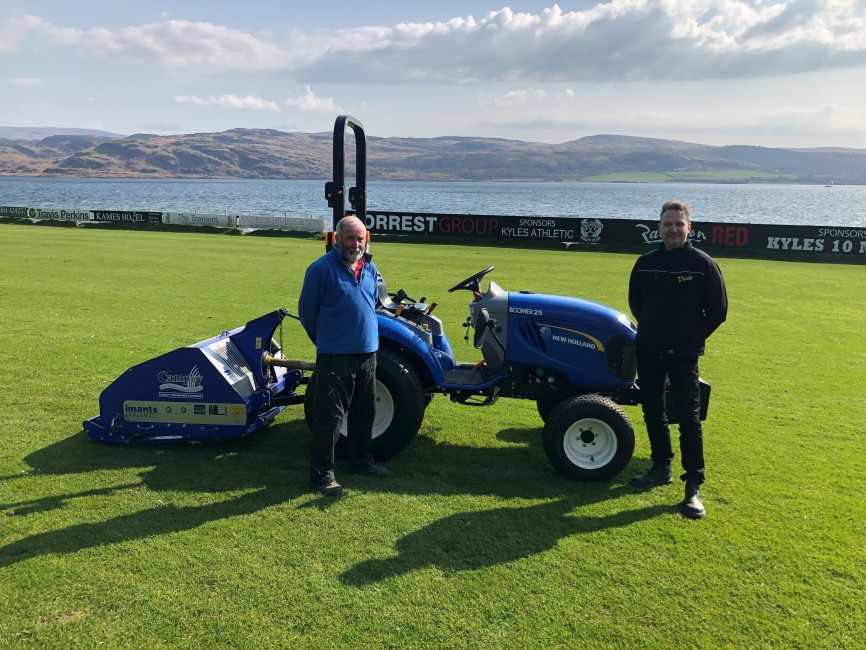 The club is based on the west coast of Scotland in Auchenlochan, with their facility at the edge of the Kyles of Bute - a narrow sea channel. They are often subjected to heavy rain, and when combined with a drainage issue on the field a number of games were called off with some having to be played at other clubs at a cost to the Kyles Athletic. Because of this, they decided to have drainage installed.

Tom Whyte is the sole volunteer groundsman at the club. He explains that the field was in good condition before the drainage issues started to appear, and after unsuccessful attempts to resolve it, he thinks the ShockWave could be the solution.

"Two years ago, the committee decided to get a contractor in to install drains, but they weren't a success, and it was put down to the stone being too close to the surface. Because of the compaction, they couldn't go further down without causing a lot of hassle to the field. We spent a significant amount of money to have the work done, and it wasn't a success, so we had to look at other ways of fixing the issue.

"The council tried to use a tine aerator, but after covering about a seventh of the pitch, they said it was too wet and never came back. I was recommended a ShockWave, and I spoke to Richard Heywood at Campey and he explained to me that when the ShockWave hits the rock, it rides it, it doesn't try to break its way through, but it will go through the small stuff.

"For us, it was all down to money, I spoke to Richard Campey, and he did us a deal with the ShockWave, a New Holland Boomer 125 and a fertiliser spreader. That led to me approaching our district council and Clackmannanshire District Council. Both of them gave us money towards the machines, and that made it affordable for the club."

The Imants ShockWave is the perfect solution for Kyles Athletic because it is designed to decompact heavy wear areas by relieving soil compaction using 12mm thick knives. This makes it the ideal aerator on fields that have stone near the surface because the blades won't break and cause further damage to the machine.

While the main aim of purchasing the machines was to eliminate the drainage issue, Tom also wanted to be able to plan his maintenance. In the past, the club relied on borrowing equipment from others, but now they own their machines Tom feels able to raise the standards with plans already in place to hire the machinery out to provide income for the club.