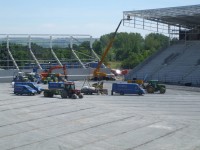 Llanelli is one of the most famous rugby towns in the world. It is home to 'The Scarlets', the passionately-supported professional team who compete at the highest level of European rugby union.

The Scarlets was created from the original Llanelli RFC when elite rugby union in Wales was restructured a few years ago. Llanelli continue to thrive as a semi-pro club in the top flight of Welsh rugby. Both teams played at Stradey Park - until October 2008 when they moved to a spectacular, new high-tech stadium; Parc y Scarlets.

Inscapes Limited commissioned MJ Abbott to play their part in the construction of the pitch at the new venue. MJ Abbott is at the top of their league for installing professional, state of the art drainage and irrigation systems. The company was contracted for the implementation of a full drainage system which comprised of a geotextile layer, 100mm gravel layer and a 200mm lower rootzone installation.

This was followed by pitch trimming, laser grading and the design and installation of an irrigation scheme. The irrigation system was designed in-house by Contracts Manager Nathan George and included a Rain Bird two wire control system, Rain Bird Eagle 950 sprinklers fitted with turf caps around the perimeter of the pitch and 8005 series sprinklers fitted with turf caps within the pitch.