by Mark Sanderson
in Chemicals & Fertilisers, Technical, and Golf
on 09 Oct 2017

Syngenta Turf Technical Manager, Marcela Munoz, highlights the challenges of dynamic disease populations within turf surfaces, and the role of the new Instrata Elite fungicide to tackle infection outside and in the leaf 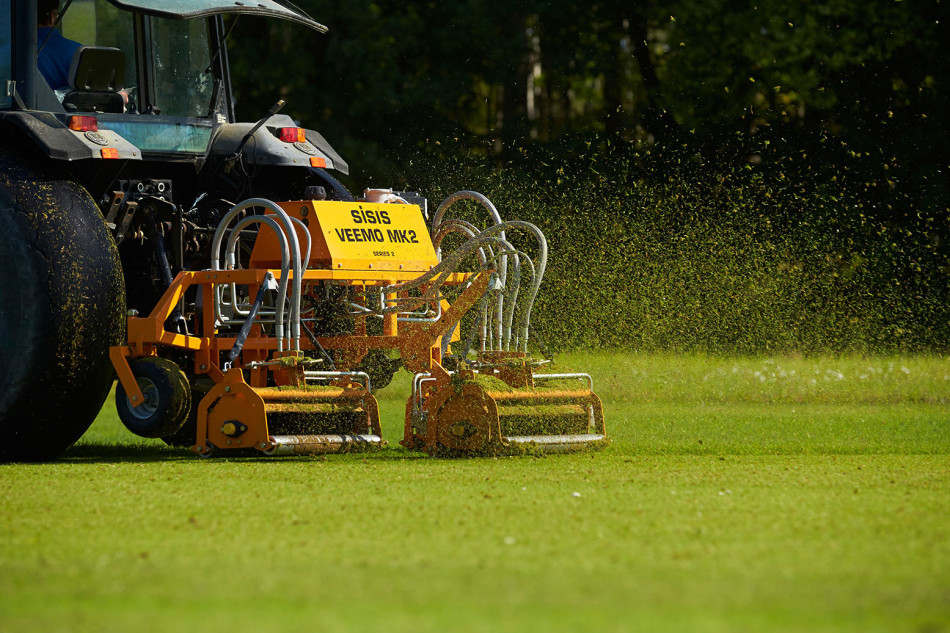 As turf mangers, we strive to produce the most consistent playing surfaces possible, which perform the same day in-day out. However, turf is a living organism, subject to a whole host of outside influences that act on each individual plant that conspire to create variability and differences.

The skill of the greenkeepers and groundsmen is to use all their knowledge, experience and available tools to manage the outside influences as well as possible to mitigate their effects. It's a constantly changing and shifting balance.

Furthermore, the disease pathogens that attack turf are equally dynamic, affected by variable outside factors and at different stages of development during any infection.

In the laboratory, or under strict trials conditions, we can focus on disease at specific points in its life cycle and development. In the field, however, all disease populations will be at various stages and offer us considerably difficult challenges to manage and control. 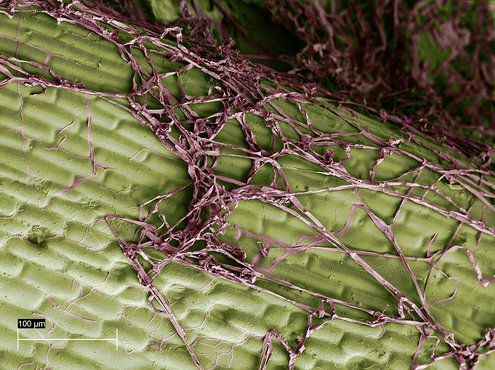 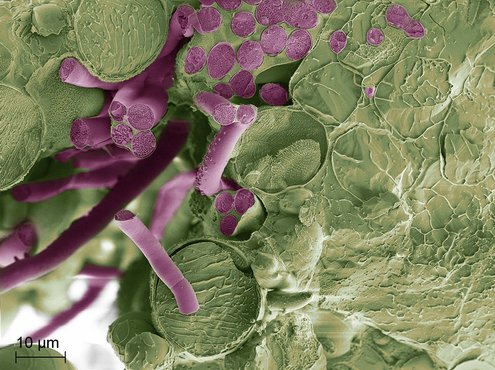 Left: Controlling mycelium on the leaf surface prevents disease getting into the plant. Right: Once infection is inside the leaf, only systemic fungicides with activity on growing hyphae will stop disease development

If we look at the most common disease on golf courses, Microdochium Patch (Fusarium), for example, we will typically find resting spores in the thatch; spores deposited on the leaf surface by wind or rain splash; recently germinated spores growing mycelia and seeking an entry point into the leaf and, if we cut into and look inside the leaf, hyphae working through the leaf cells that will sap energy from the plant and cause damage as it develops.

Where disease goes unchecked, either by the plant's own defence mechanisms or a fungicide treatment, we may even see it completing its life cycle and breaking out through the leaf surface to release more spores - often resulting in serious loss of turf quality.

We face the challenge of these dynamic disease populations, which dictates the way we can manage the turf. There are two key elements to how we can achieve this:

Turf that is damaged, weakened or stressed is inherently more susceptible to infection and will suffer more severely from any disease attack. Cultural controls, as part of an Integrated Turf Management (ITM) programme, can have a significant impact in reducing both the risk and severity of disease, as well as helping plants to recover faster from any attack.

ITM will also include making conditions unfavourable for disease, for example, improving drainage and aeration; increasing air flow and light to surfaces and the removal of thatch.

However, some actions necessary for turf management could increase the risk of disease attack, such as mechanical damage during aeration, or feeding to avoid Anthracnose risk that could encourage soft leaf growth more susceptible to Microdochium infection.

Also, the daily demand of players, such as low cutting heights to improve golf green speed, physically limits the leaf photosynthetic capability and increases stress on the plant that makes it more susceptible to infection - particularly if dull blades result in tearing, rather than a clean cut.

The combination of pressures from ever increasing demands on turf quality, along with weather patterns resulting in greater extremes and difficult conditions, almost inevitably means that, at some stage, fungicide treatments will need to be planned and built into turf management programmes.

It has long been recognised, and further confirmed by the latest Instrata Elite trials, that disease prevention delivers the best results in terms of turf quality and long-lasting results. For that, we are looking to apply as close as possible to the likely time of infection, which will give us the greatest level of fungicide active on the leaf to stop disease.

The trials demonstrated the potential to achieve almost total control of disease for up to six weeks from application, when there was little or no visible disease at the time of treatment (Fig 1).

Using the GreenCast disease forecasts, in conjunction with local knowledge and experience of conditions when disease is likely to break out and historic records of disease risk, can prove instrumental in better proactive prevention of disease.

Left: Fig 1. Applied preventatively, Instrata Elite delivered long-term disease control. When pressure increased and disease broke out to cover 16% of the surface on untreated greens area, Instrata Elite continued to hold back infection at just 2% that was significantly better than the industry standard, iprodione. Right: Fig 2. On greens showing 6% surface area affected at the time of treatment, Instrata Elite prevented further development of disease, and protected turf that allowed clean regrowth and surface recovery. Within two weeks of application the affected surface area had shrunk back to 2%, and continued to decline as turf quality improved. On untreated areas, infection spread to reach over 11%.

In practice, the duration of any disease protection and frequency of fungicide applications will be dictated by disease pressure as a result of prevailing weather conditions, and the underlying health of the turf.

If ITM measures have been effective and turf is strong and healthy, the duration of control could be significantly extended - and we have had reports of completely clean turf for eight to ten weeks from a treatment programme. However, in difficult conditions and under high disease pressure, it has to be recognised that fully effective control might be significantly shorter and re-treatment may be required in as little as three to four weeks.

One of the key advances with Instrata Elite to tackle a more dynamic disease population is the combination of actives that give the ability to target Microdochium outside and in the leaf. Whilst the fludioxonil coats the leaf surface and prevents germinating spores from penetrating stomata or cut leaf ends to get into the plant, the propiconazole element is active within the leaf to stop disease developing inside.

The trials' results also showed (Fig 2.) that applications once early symptoms are visible is not as good as a preventative treatment on clean turf, but for greenkeepers and groundsmen in a practical situation - where weather conditions or player pressures may have delayed an optimum application timing - the early curative activity is an incredibly valuable asset.

For greenkeepers using indicator greens as a guide to application timing, it offers an essential flexibility to be able to target the diversity of disease pathogen stages that will inevitably be present on other greens when early infection is seen.

And, with a dynamic disease population, any application at an early curative stage also needs the dual action to target and prevent spores from developing to stop immediate re-infection and give long-lasting results. With the spore acting fludioxonil, there is the chance to eliminate disease spores surviving in the thatch that will reduce the risk of outbreak from rain splash in high pressure wet and humid weather conditions - typical of autumn or early spring timings best suited to Instrata Elite applications.

With the benefit of an effective ITM programme and a planned fungicide strategy - with the flexibility to tailor to in-season conditions - it is now possible to proactively prevent disease attacks and minimise damage. This approach also ensures turf can recover quickly and maintain the consistent surface conditions right through the season. 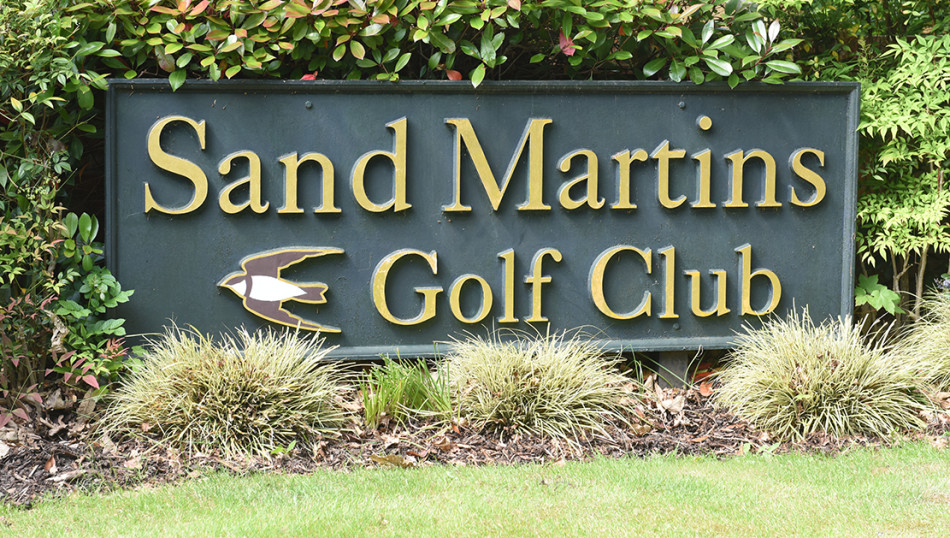 Instrata has been a key part of his armoury at that timing but, with only one application available. He was keen to try out two applications of the new Instrata Elite, particularly since his August renovation practices tend to be more aggressive than in the spring, which raises the risk of attacks and reinforces the need for clean turf to aid faster recovery before the winter for the 18-hole Berkshire course.

"If we can keep the surfaces clean and disease free until after Christmas, then surfaces typically will stay good through to the spring," reported Matt. "The intensity of disease pressure tends to ease off and members' expectations are slightly more tolerant through late winter."

"We have had good experience with Medallion TL used in the winter months, so were confident that the fludioxonil would be effective. Coupled with a systemic active, it appeared to fit the variable weather conditions with intermittent growth."

He pointed out that it was clearly apparent that where he had used the Instrata Elite the greens remained absolutely clean, when some of the approaches and collars that were not treated were smashed with disease. 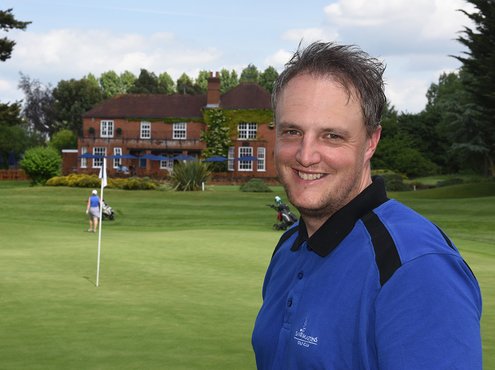 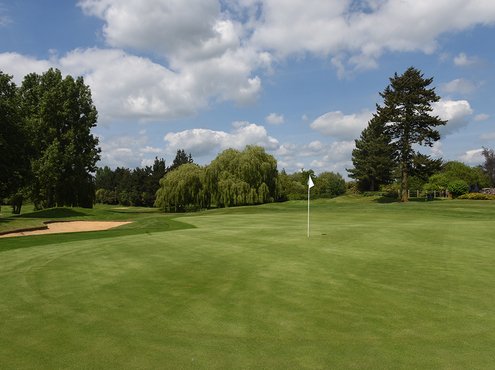 "It was certainly under high disease pressure right through to the end of the year, but performed very well throughout the time. It was noticeable that the greens were as good as ever, if not better."

He cited that turf quality and playing surface consistency has been a key objective of the latest course management plan, including ITM techniques and proactive prevention of disease.

Matt's trial report highlighted that Microdochium was active on all greens in late October, and spreading to affect large parts of the surface. Mowing height was raised from 4mm, with grooming twice a week, up to 4.5mm in late October and 5mm in early November.

Taking off the stress by raising the cutting height, in combination with iron application and Instrata Elite application to stop disease, aided recovery, such that by mid-November all the effects of Microdochium scars had grown in and no signs of disease - even though the disease pressure was very high.

"By early November, the greens were very good. We were able to get on and safely slit greens to 15cm, brush, mow and turf iron - superb," he reported.

Matt advocates the use of a combination of indicator greens, his own experience and GreenCast, along with other weather data to decide when to spray. "We also have a brilliant network of local greenkeepers who are always in conversation on social media, so get to know what's about and what others are doing, which is a great help," he added.

"There are always new things to try and improvements to be made, with the positive feedback from members and the club indicating we are managing to get it right," he added.

Instrata Elite is available from the Pitchcare shop