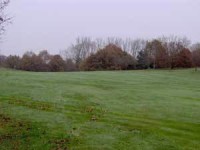 Greenkeepers are always looking at opportunities to improve the performance of their golf courses. In previous years (10-15 years ago) many golf courses dedicated most of their efforts towards the management of greens, collars, approaches and tees. Often, time and budgets did not allow much work on fairways other than mowing or some localised draining.

Today, however, the golf playing public and members expect wall to wall management of the facilities, which in turn has seen greater inputs of time and resources being put into fairway maintenance.

Fairway maintenance produces a number of challenges for greenkeepers. Greens and tees are traditionally similar in construction and have generally consistent levels and soils and, in the main, have irrigation systems to keep them watered. Fairways, however, are different. The sheer size of these undulating areas, the variation of grass species established and the depth and characteristics of the underlying soils all contribute to a diverse growing nature of the grass on them.

Trying to keep an even sward on fairways is often very difficult, especially during the summer when long periods of dry weather persist. Last year was very dry and many golf courses suffered with grass dying back on the fairways. Many greenkeepers have had to work very hard to re establish a sward on these fairways.

The loss of grass is generally confined to the sloped areas of fairways. Surface water runs off very quickly and the fact that these slopes are more exposed to the sun and drying winds means they are the first areas to dry out and often become hydrophobic, whereby the soils become resistant to water infiltration. This, in turn, compounds the problem of trying to maintain moisture in these areas.

Once these areas have become dried and bare the only solution is to re-seed. To ensure the seed will germinate it is necessary to hollow or solid tine the affected area to open up the soil profile, allowing access for new top dressing materials and the seed to integrate into the damaged area. The seed needs soil contact for germination. The timing of these operations is crucial. The best time to achieve these renovations, especially if there is no fairway irrigation, is in the autumn when the soil is likely to remain moist and wet, ensuring that the seed has moisture for germination.

The extent of grass loss is also dependant on the species on the fairways. Shallow rooting grasses (Poa species ) are more prone to dying out compared to deeper rye grasses or other grasses that can tolerate dryer conditions such as bents and fescues. Many greenkeepers are now looking to establish a variety of natural grass species on their fairways. 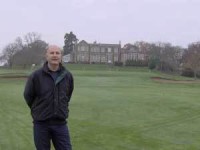 Colin is currently trying out some seed trials on his fairways, having heard about the likely benefits of using tall fescue (Festuca arundinacea) grasses that can tolerate drought conditions and are capable of rooting down to below one metre. He has set out two trial areas choosing two fairway areas on both the John O'Gaunt and Carthagena Courses. The aim of the experiment is to see if he can establish and maintain tall fescue grasses on the areas and to see if they can tolerate the dry conditions expected next summer. If the roots can establish themselves down to the depths expected (1-1.5m) then the grass has a better chance of surviving these drying periods. 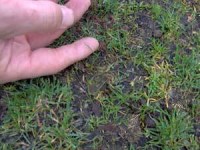 and brushing it in to ensure it integrates into the soil. The Carthagena fairways saw Colin inserted the seed using a disc seeder ensuring the it was put into soil contact at between 12-15mm depths. Both areas were sown in early October and have now germinated.

Colin is keen to see how well the tall fescue establishes and how it will compete with his other grasses ( Ryes, Poa,bents and fescues) ,especially with the fairways being maintained at a constant cutting height of 16mm all year round. However, the ultimate test will come next year when Colin can compare the hardiness of the tall fescues during the summer months.