The Ipswich Cricket Club groundsman was watching the International Cricket Council's World T20 qualifying competition last year when he had the brainchild of a European tournament for club cricketers.

He began looking into the idea and a conversation with Nick Crame, like Clarke a former member of Copdock Cricket Club, confirmed his belief that it could be more than just a pipe dream.

Clarke, who is also an Ipswich CC committee member, said: "I thought it was something that had not been attempted before and having spoken to Nick Crame, who had toured Estonia and played against their national team while he was with Battisford, I thought there must be other European sides who would be interested in playing European opposition."

It was then that Clarke approached Steve Gauke, the current chairman of Copdock & OIs, to float his vision.

He said: "Both clubs' cricket weeks were struggling to survive, and I thought we should try to do something to increase our status and that this would be a good way of doing so. 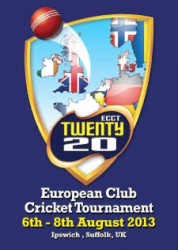 "I spoke to Steve and he thought a European tournament was a good idea, so we formed a committee and met for the first time in January, and it has progressed from there."

The European cricket club tournament will be jointly hosted by the two clubs and take place from Tuesday, August 6 until Thursday, August 8 next year.

An eye-catching logo has been designed by Copdock player Tom Jenkin, who works as a graphic designer, to promote the tournament and it appears on the official literature.

Copdock & OIs will be staging a Minor Counties Championship match on the Sunday, Monday and Tuesday of that week, so tournament matches will only be played at their Old London Road on the Wednesday and Thursday. Ipswich's Clay Hall ground, which has two pitches, will host matches on all three days.