Cricket club groundsmen face the same challenge as all turfcare managers; how to eliminate compaction, improve drainage, encourage healthy deep-rooted grass growth and provide players with optimum ball conditions. All this in a playing season which is short and intense at a time when weather can range from drought to heavy thunderstorms. Penny Comerford reports on one of the most consistently successful tools in the cricket armoury - deep drill aeration. 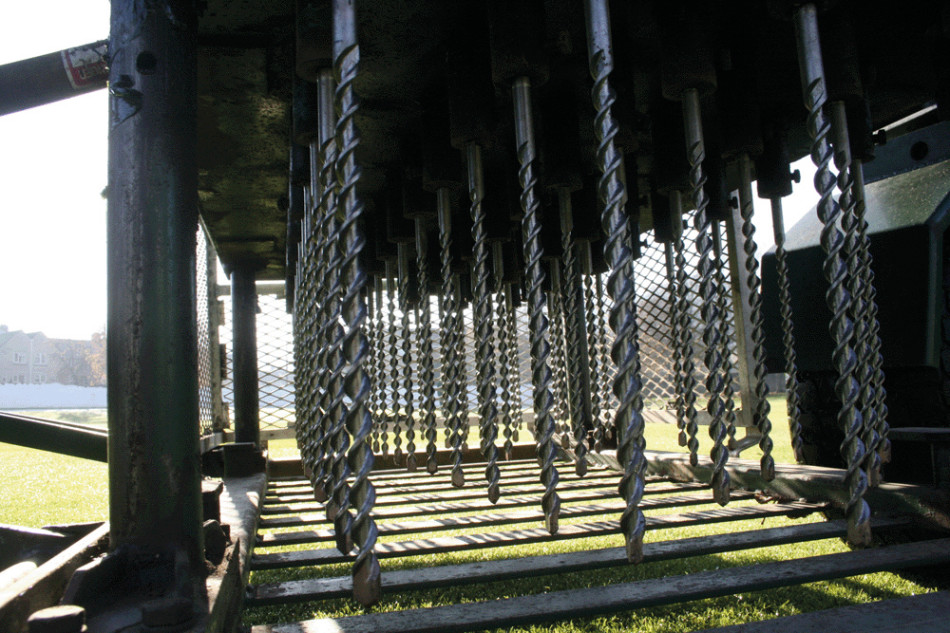 What do the cricket clubs at Moulton Harrox, Todmorden, Saffron Walden, Bath, South Woodford, Colchester, Northampton and Cleethorpes have in common? They all have squares with healthy grass growth and excellent bounce; and they all have incorporated the Deep Drill aerator into their maintenance programme.

Graham Sneath at Saffron Walden CC has twice won 'Best Wicket in the East Anglian Premier League'. "In four years, and since using Deep Drill, I've had the two wins and two runners up," he told Pitchcare. "That's been enough to attract the Unicorns back here, and some good county cricket tournaments."

He looked at the process on the advice of Laurence Edwards, an ECB Pitch adviser for the east, who said it was the best way to aerate and drain cricket squares. "I saw it demonstrated at High Roding Cricket Club. They took out a core and I saw the duct eleven inches deep with the grass root right at the bottom, fantastic! That said everything to me." He enlisted the aerator's help after the end of season koroing of the square in 2011 and, since then, grass growth has been good enough to deep drill alone. "I am really happy with the Ecosol Turfcare contract operation and players have told me that the consistent bounce and good carry of our square rival the best grounds in the country." 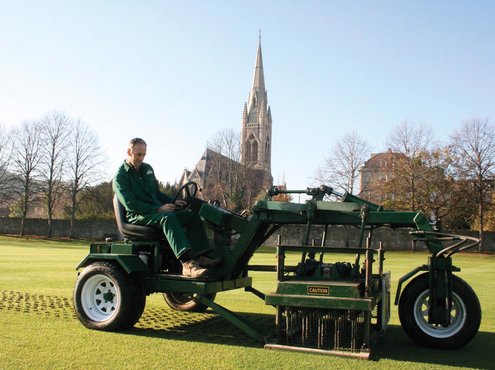 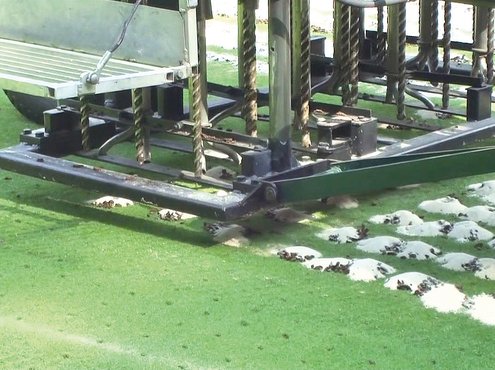 The Deep Drill differs from conventional aeration equipment because it drills out holes, unlike the punch action spikers that force tines into the square to create the ducts. The drills are used to break through horizontal soil pans/breaks, marl layers and areas of weak cohesion between different loams or soils, extracting and aerating in one process without surface damage. Water movement can then be accelerated away from the square's surface faster, but the primary effect is that the grasses develop much deeper rooting.

The ECB report on aeration for cricket squares looked at all forms of machinery that might be deployed. The four year study identified situations where each trilled machine was most appropriate and the circumstances in which you would use them.

Punch action spikers, the report said, had been used for many years, but mainly at a shallow depth of around only 2-3in. Whilst deeper penetration may have been desired, it was commonly unachievable due to the risk of surface lifting or surface "chipping" occurring upon extraction of the tine, when weakly and poorly bound upper soil separates from the loam or soil beneath it.

In more recent years, Wiedenmann and Charterhouse solid tine aerators have been used with success to depths well beyond that 2-3in level. However, that had only really been possible where deep drill aeration had been done in preceding years, providing the root extension and sufficient soil/loam binding to enable tractor mounted solid tining.

"I am a great enthusiast of using drilling techniques," said Chris Wood, the ECB's Pitches Consultant. He instigated its inclusion in the TS4 document some years ago and recommended it in 2005 to Steve Birks at Trent Bridge when his square was suffering. 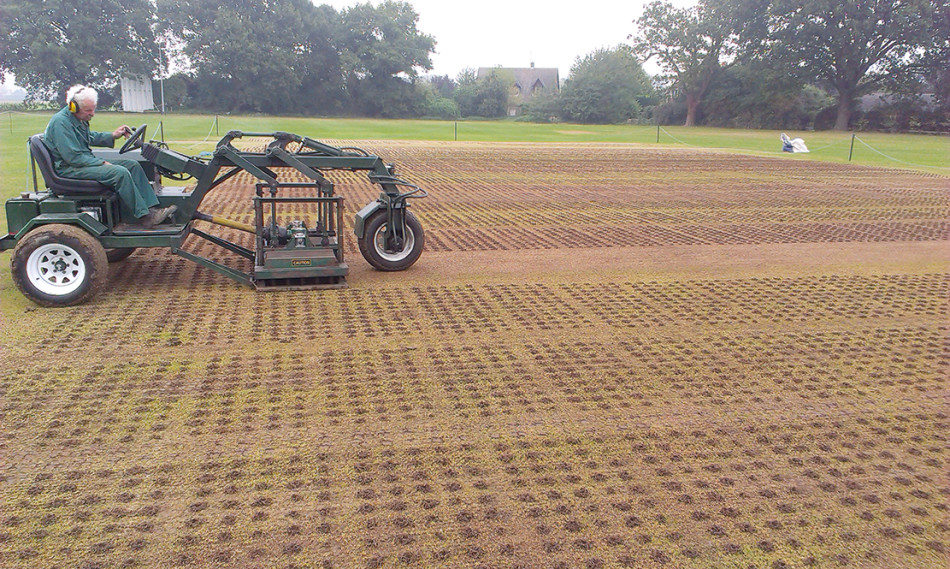 Ecosol's Bretton King added, "Modern cricket square maintenance has seen a trend towards using stronger loams and, if these aren't keyed into the old loam beneath properly, soil and root breaks follow, with shallow aeration in ensuing years only exacerbating the problem. The phrase 'low and slow' is one we hear often regarding bounce and is a symptom of poor soil density that adversely affects it. Insufficient root penetration is also common, but can be overcome with the correct identification of its cause. In either case, Deep Drill is a tool perfectly suited to help rectify these issues."

Graham Sneath's comments were echoed by Norman Reynolds at South Woodford who also took up the process some years ago on the recommendation of the ECB. "I am very pleased with the improved grass growth and bounce. When we had a soil analysis done on the square in September 2013, you could still see the influence of drill ducts - they last really well and keep providing improved drainage."

Laurence had become a real fan of the Deep Drill since he first saw it at Colchester Cricket Club. "It's one of the most important things to have happened in cricket square maintenance. Nothing does such a good job in terms of aerating, encouraging a good depth of rooting and relieving the compaction we want in summer, but not in winter. I often advise it to bolt the layers together, allowing the root to go through to the bottom."

Situated on the damp western slopes of the Pennines, Todmarden CC is a successful Lancashire county focus club. It has to work within a strict budget, but head groundsman Neville Sutcliffe thinks deep drilling is a highly cost-effective and beneficial process to use each year. They missed one year, he reported, and really noticed the difference, with more retained moisture on the surface. Previously, the club used to spike the square with 4in tines. "Unfortunately, that resulted in heaves and a 'plywood' effect of separating loam layers which was seriously detrimental to bounce," said Neville. 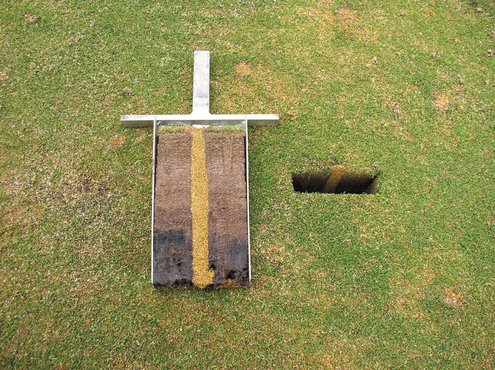 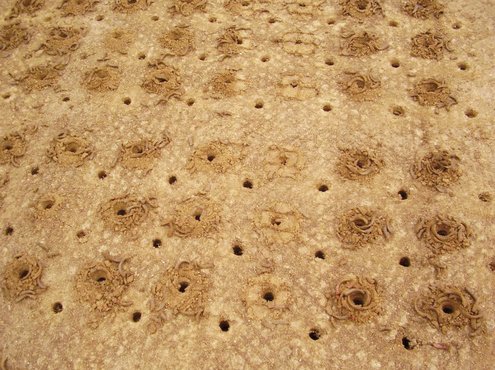 He decided that deep drill was the answer. "That 225mm duct relieved compaction without heave and the soil was extracted so grass could root deeper." He also noticed that winter drainage was better as a result of the process, with less standing water on the square and less moss. In the following spring, pre-season rolling was quicker due to the more stable surface. "It's all about the bounce for us," Neville concluded, "If the top six inches of the square is solid, the ball bounces higher - it's been brilliant and the players are very happy."

It's all about the bounce for us. If the top six inches of the square is solid, the ball bounces higher - it's been brilliant and the players are very happy

Optimum time in the season to make the best use of the process can vary, but is generally governed by soil moisture levels and maturity of the sward following renovations. "It's usually the end of October, into November," said Laurence, "but some clubs in drier parts of the country can get away with it later."

Karl Hibbert at Moulton Harrox likes to use it mid-end of season renovation, after scarifying and before applying loam and seed. "You get a good peg effect then, with loams held together by the drill ducts, and the soil exchange works well with the roots following the holes." It is now part of his five year plan for the club which has a 100 year old square. Previously, there was a severe panning problem 2-3in down. "There was no rooting going on, spikes bounced out and we were left with a sparsely grassed square with standing water during the season."

It worked a treat - the improved water movement means we sometimes have to irrigate the square during the season, but I prefer having to do that rather than facing a waterlogging issue after summer rainfall

Karl took advice from Howard Swain at Cleethorpes Cricket Club, who'd also used the system, adding "It worked a treat - the improved water movement means we sometimes have to irrigate the square during the season, but I prefer having to do that rather than facing a waterlogging issue after summer rainfall. We have more pace and bounce, especially during the second half of the season when the grass rooting is established. We know it's the Deep Drill that has had this effect because, as we near the end of the five year cycle, we start to lose pace and bounce. By having it done again, we expect to see this pick up again." 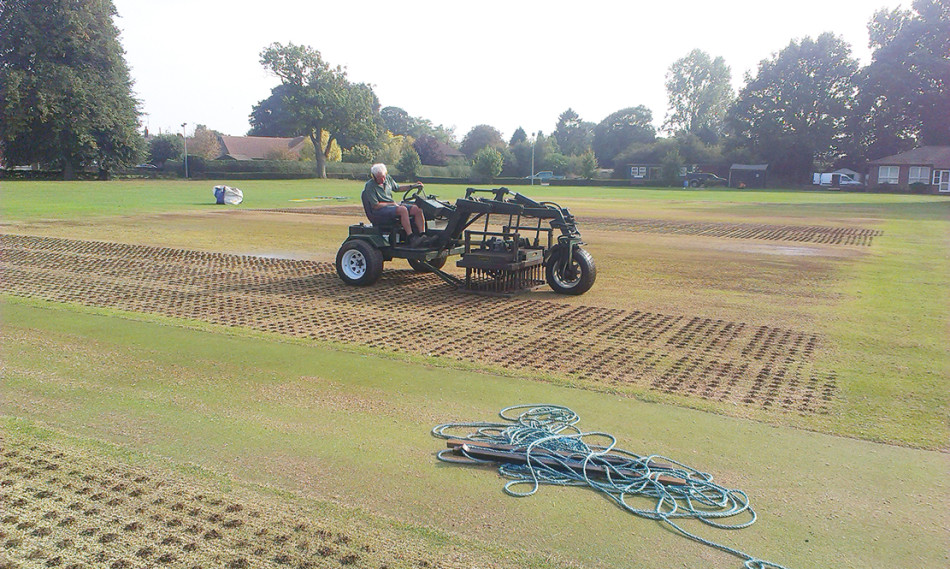 At Wantage Road, Northamptonshire County Cricket Club's Paul Taylor is another fan of the machine's abilities. Eight years ago his wickets were bare and lifeless, with hard pans. "The ball was turning and deviating and there was no pace to the wicket," said Paul. "Every game took its toll on the grass and the wickets always looked brown and dusty." He reasoned that water was flowing straight off the square and didn't get into the soil profile. Nothing had helped, so Paul enlisted Ecosol to puncture the impervious pans and allow water to percolate deeper into the soil profile. This also improved the balance of oxygen and microorganisms in the profile to encourage healthy root extension, hardier plants and grass with greater vigour.

Northamptonshire first used drilling techniques when they started a regular programme of Drill n Fill to stabilise the square's profile, which involved using custom-built, ECB approved 25mm diameter drills running to a depth of 200mm. This is a very different operation compared to Deep Drill and should not be confused with it. Drill n Fill involves duct creation followed by labour intensive hand filling with the same loam that is used for topdressing.

This operation is specifically designed to create peg-like columns of loam that bind surface platelets of soil to a deeper and stable soil. In the ECB study, it is referred to as nailing the square. Over the years, it acts like a soil exchange and, additionally, Northants has gradually seen the old marl disappear out of the soil profile too. Trent Bridge had also previously used the procedure to great effect.

"The benefits are immense", said Paul. "I can't think of any negatives!" Drill n Fill was performed in August 2013 on a wicket that was part of the rolling programme and, a couple of weeks later, Northamptonshire played Glamorgan in a four day match on it. Paul explained "We washed down straight away and, a week later, you could hardly see that a match had taken place. The wickets were all green with 85% of the grass already back. It was fantastic! Seven years ago, there would have been no grass left and a wicket like that could be out of play for lengthy periods for recovery."

It was once this stabilisation had been achieved that he followed up with the Deep Drill in the November, using finer and deeper drills with no backfill to ensure that his granular fertiliser worked to maximum effect over the winter, promoting good root development and healthy plants in the spring.

Paul has used a range of equipment to successfully aerate the square and outfield over the years, but readily concedes that the combination of Drill n Fill and Deep Drill has had the most dramatic effect. "In my opinion, this has been the overriding contributor to achieving the higher pitch mark scores we have received in the last few years."