While they've been using J Premier Pitch at the Lamex Stadium for the last three years, the grounds team at Stevenage Football Club cite this season as the best they've ever had in terms of plant strength and surface performance. After germinating in just five days earlier this year, Head Groundsman James Fennessy also notes the fantastic resilience demonstrated by the Johnsons Sports Seed mixture, which has meant they've seen no disease on the stadium pitch this year. 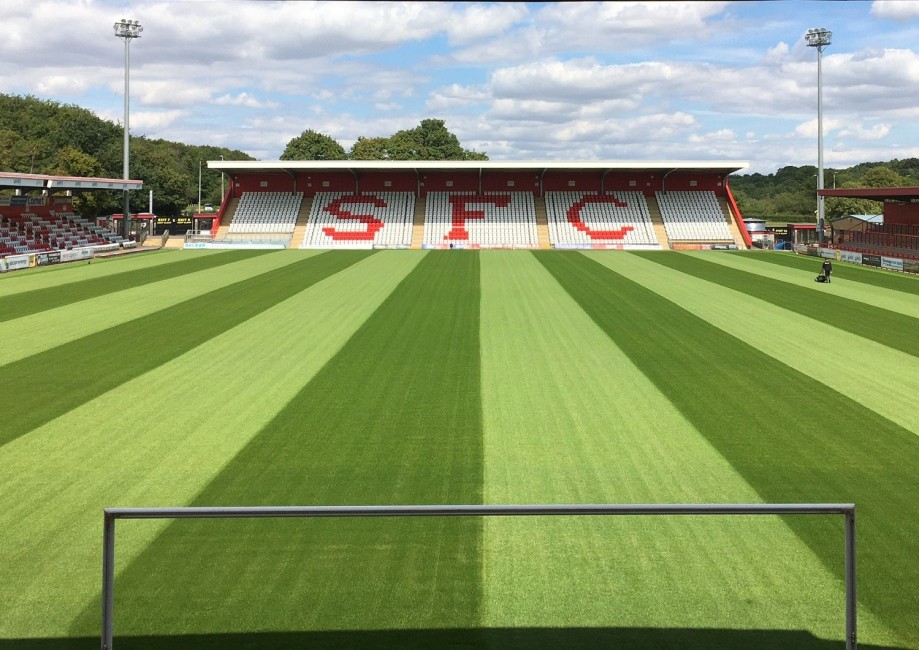 Overseeing a team of five, across the stadium, training ground and an academy site, James began using Johnsons J Premier Pitch after seeing the results at other clubs. "Every stadium environment is different and, because of that, you can never be sure how a seed is going to take. Our corners are open, meaning the pitch is exposed to the elements and we have some areas that don't get any sunlight during the day so it's about finding a seed that suits the setting - J Premier Pitch has performed fantastically!"

"We had a seven-week window to complete our renovation this year and started by putting 20 bags of Premier Pitch down at the end of June. We couldn't believe it when we started to see germination within just five days, which then gave us the maximum time to get the pitch ready for play."

The combination of highly rated perennial ryegrass cultivars in J Premier Pitch not only deliver rapid establishment, but exceptional wear tolerance, disease resistance and a camera-friendly finish - something that James also praised. "The plant is extremely well rooted and gives us great colour year-round which has been ideal for presentation. In addition, the sward is incredibly dense which means we don't think we'll need to do any pre-winter overseeding this year - reducing both workload and cost."

Seed from across the DLF portfolio, specifically the Masterline range, is used at the training ground and academy site where James again comments on the importance of resilience. "The demands on the surfaces here are actually far greater than at the stadium so it's absolutely crucial the seed we put in the ground is going to be hard wearing. This year they are good and strong, still performing well as we head towards winter."

"All of the seed we get from DLF is backed up with fantastic technical support from our Regional Technical Manager Craig Spooner, who keeps us up to speed with updates to formulations." He concludes, "It's always good to learn about the work going on behind the scenes, which keeps us reassured that what we're putting in the ground is always being improved to perform at its very best."