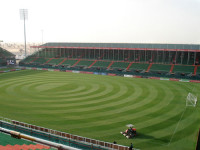 
The five-unit ride-on mower is being used to maintain the seven grass pitches at the prestigious sporting complex, which features a permanent 4,000 seat grandstand. For large events such as the annual Rugby Sevens tournament, the AC Milan versus FC Hamburg soccer match this January and the forthcoming IRB Rugby World Cup Sevens in March 2009, the stadium capacity can be augmented by a further 38,500 temporary seats accommodating a total of 42,500 spectators.

Benjamin Corby, the Project Manager responsible for the grounds maintenance at the complex says,
"We needed a highly productive cylinder mower that could cut large areas of grass to a very high standard. The Fairway 305 is perfect for our requirements; it has a cutting width just shy of three metres and has a light footprint. Add the excellent quality of cut and it's a mower that's absolutely right for our needs.

"I have a team of six here and there's a lot of grass to be maintained. The second pitch is located in a bowl and enclosed on three sides by grass embankments, which can accommodate 15,000 spectators. The other four pitches are located close to the clubhouse and this will eventually become the home of the Arabian Gulf Rugby Football Union, which is the governing body for rugby in the region."

• Ben Corby has been resident in Dubai for 2½ years and for the past year has been responsible for The Sevens stadium.
• His background is in greenkeeping having worked at Woodhall Spa, Sleaford and the De Vere Belton Woods in Lincolnshire. He also apent 1 ½ years at Harbour Town Golf Links at Hilton Head Island in the USA.
• The Sevens stadium is owned by Emirates Airlines.
• Construction took just 423 days using 5046m³ of concrete, 135,000 bricks and 220 metric tonnes of cement.
• There are 15,000 car parking spaces available.
• The total square metres of grass at The Sevens is 64,000m².
• The stadium will eventually cater for most sports played in the region, including rugby, cricket, soccer, basketball, netball, hurling, gaelic football & rugby league.
• The Dubai Rugby Sevens competition has been played for 39 years, 38 at the at the famous Al Awir ground, home of the Dubai Exiles Rugby Club.
• The winners of the Emirates Airlines Dubai Rugby Sevens, the stadium's inaugural competition last November, were South Africa who produced a thrilling last-minute victory over England to claim the trophy.

Textron Inc. is a $14.2 billion multi-industry company operating in 28 countries with approximately 42,000 employees. The company leverages its global network of aircraft, defence and intelligence, industrial and finance businesses to provide customers with innovative solutions and services. Textron is known around the world for its powerful brands such as Bell Helicopter, Cessna Aircraft Company, E-Z-GO, Greenlee, Jacobsen, Kautex, Lycoming, Ransomes, Textron Systems and Textron Financial Corporation. More information is available at www.textron.com