by Juliet Liddell
in Multi-sports venues, Tennis, and Rugby
on 12 Nov 2019

0 Jacobsen Proves the Complete Package for The Lensbury

Multipurpose venues need quality, versatile and reliable mowers, and that's why The Lensbury opted for the Jacobsen TR320 and GP400. 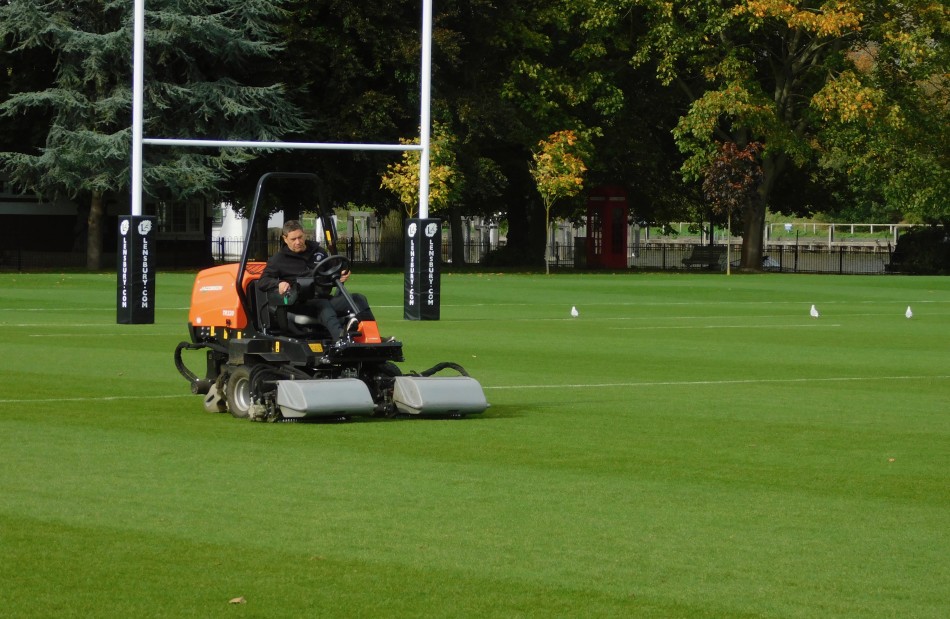 The four-star club, hotel and conference centre sits on the banks of the River Thames in Teddington, London, and hosts international rugby teams as well as professional club sides. There are also six grass tennis courts and ornamental gardens in the grounds of the hotel, all of which are kept to an impeccable standard by head of grounds and gardens, Peter Craig, and his team.

The rugby pitches are an essential part of The Lensbury. They attract the world's best and need to look and play to their standards, so when the decision was made to get a new mower, Peter decided to trial every machine at his disposal before going for the TR320.

"I took a long time choosing the rugby mower because those pitches are the priority here from a turf management point of view, and that's why we tried virtually everything before we made a choice," Peter explained. "The quality of cut on the TR320 is good as is the adjustment of cut, and I'm glad that I made the choice I did."

"Price is obviously important, and the TR320 was competitive in that area. I looked at the Jacobsen and all the main mower brands. We were looking at all of the usual criteria, the quality of cut, the range of cut, the comfort, the noise and the width of the machine. The size of the boxes was another aspect I looked at because I wanted the biggest boxes possible to reduce the amount of time spent emptying them."

"Those were the main things along with the ease of use because we wanted it to be operator friendly. The back-up service is obviously a big part of it as well, and I'd never bought a Jacobsen before, so I didn't know what it was like. When we've needed them, parts have arrived very quickly, and the service from Ernest Doe has been excellent."

The TR320 is the perfect choice for The Lensbury because of its quality of cut, operator comfort and vertically folding units. The 1.83m cutting width can be reduced to a 1.63m transport width, with the reels lifting to a vertical position to make driving around tight areas, such as ornamental gardens, simple.

Although the pitches are the priority, the ornamental gardens and grass tennis courts are also paid close attention. While Peter's mower criteria for this area was similar in terms of quality of cut and productivity, the need for a machine that could handle attachments was paramount for other maintenance.

For this, the GP400 was his mower of choice. It gets used to cut the ornamental lawns during the cutting season and for verti-cutting the tennis courts during the season, at the end of the season and during winter. Peter has high praise for the swing-out centre reel for making a "massive difference" when it comes to maintenance, and the 'great' quality of cut.

That great quality of cut comes from the TrueSet cutting units that allow operators to easily adjust the mower to ensure it has the optimum reel to bedknife setting, giving the perfect cut every time.